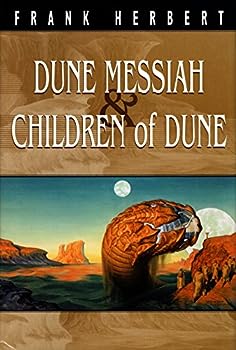 (Part of the Dune Universe Series and Dune Series)

This description may be from another edition of this product. The Science Fiction Book Club (SFBC): The Classic Sequels to Frank Herbert's Dune.

Published by Thriftbooks.com User , 15 years ago
Dune Messiah takes place about 12 years after the previous book Dune so you don't come in in the middle of a twisty plot. These would be fine to read without having read Dune first (I liked both books, but Dune was happier so read that one first anyway.) Dune Messiah begins with a meeting of conspirators as they plan how to take down the emperor Paul and come out politically ahead. The conspirators are: Irulan, Paul's wife who he married for politics and will never sleep with. She wants an heir. A member of the guild who controls space travel (Paul can't see what goes on in the prescence of a guild member. He wants spice (drugs -yum). The Bene-Geserit mother. She hates Paul personally as well as politically. And a shape shifter. They agree to the shape shifter's plan of psychological poison for Paul, in the form of the reanimated corpse of his childhood mentor, Duncan Idaho, and present Idaho to Paul as a gift. Idaho has all the old Idaho's memories but knows that he has been tweaked in the reanimation process and that he is meant to set Paul up. He doesn't know how and is consciously trying to protect Paul. Paul sees the world around him entirely through his spice enhanced psychic senses. He can't see a way to escape the futures that he sees and is trying to steer things away from the worst options. He is concerned protecting his wife Chani (not politically recognized). He realizes that she will die after bearing a child, and so has not confronted Irulan about giving her birth control for the last 12 years. Chani is now pregnant, so Paul has a limited amount of time to arrange things. Many of the characters here are driven by the struggle to influence the inevitable but still unpredictable future: Paul's wives are interested in moving before the biological clock stops ticking. Paul sees the future but not all the details further away in time. Idaho realizes he will be used against Paul and is trying to avoid it. Children of Dune won't make much sense for you unless you read another book in the series first (not a problem here, since you have both together and will probably read them in order). Children of Dune takes place about 8 years after Dune Messiah. The emperor Paul's twin children, Leto and Ghani, are mentally adult (since they are pre-born - born with all of their ancestors' memories and consciousnesses), but physically children. Their regent is also pre-born, and clearly going crazy, and running the country into the ground in the process. The twins have to deal with the possibility of someday going crazy too, and meanwhile trying to be taken seriously so that they can do something about the present. Meanwhile many subplots (for me more interesting than the main plot) play out. A big theme here is people changing from the inside out. Alia and the twins are trying to find balance so that none of their inner personalities will possess them. Leto eventually begins a different sort of inside out change,
Copyright © 2020 Thriftbooks.com Terms of Use | Privacy Policy | Do Not Sell My Personal Information | Accessibility Statement
ThriftBooks® and the ThriftBooks® logo are registered trademarks of Thrift Books Global, LLC