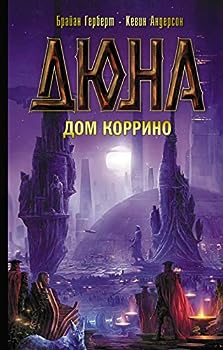 This description may be from another edition of this product. Book Three of the Epic Prequel to the Classic Novel Dune --Soon to Be a Major Motion Picture The grand finale of the complex epic trilogy of the generation before Frank Herbert's masterwork Dune ....

Published by Dune House Corrino , 9 months ago
I ordered hardcover and received paperback.

Published by Thriftbooks.com User , 13 years ago
Plaza & Janes presents this Murillo's fairly good translation and economic presentation of "Dune: House Corrino". This Editorial House presents the whole Dune Saga and its prequel thru this "out of collection" paperback format. This format also shows books written by Clarke, Aldiss and Pratchett amongst other. Brian Herbert is the son of Frank Herbert creator of Dune Saga and a sci-fi writer himself. Kevin Anderson is also a successful sci-fi writer and Dune's Saga fan. Brian and Kevin start with this trilogy a difficult mission: revisit Dune's universe describing the events immediately preceding Dune, the first & unforgettable volume of the famous saga. Did they succeed? Well, yes and... no. Yes because they deliver an interesting first step with all the elements of this fascinating universe; and no because the stories are not as gripping as the original Dune. Nevertheless Dune's fans (as me) should not be too disappointed because even Frank Herbert wasn't at the same height when writing Dune Messiah, Children of Dune and God Emperor of Dune and he will recover allure only with the two last books of the series. So let us hope the same will happen with Brian & Kevin efforts in next trilogies! The variety of themes touched by the original series is still present in this trilogy: ecology, political-religious interaction, genetic manipulation, longevity drugs and secret sisterhoods and brotherhoods. The story is as follows. The Scenery. There is a Galactic Empire ruled by the Emperor. There are powerful Noble Houses that rule different planetary systems and confront each other in endless struggle, yet subject to strict rules. There is a Guild of interstellar Pilots. There is the Bene Gesserit Sisterhood following their eugenic plans and playing in backstage as advisors to all powers. Computers & AI are forbidden and replaced by human-computers called Mentat. Arrakis is Desert Planet producer of a unique substance: the Spice and it is inhabited by mysterious desert dwellers: the Fremen. The Argument. Consist of several threads that are mingled and interact thru the whole triad. A Duke Leto Atreides is decided to establish his House in a dominant position at the same time Lady Jessica his concubine is pregnant. The Bene Gesserit Sisterhood following their eugenic plans is anxiously waiting for Jessica's child certain that will be the expected girl. Baron Vladimir head of Noble House Harkonnen, Atreides' ancestral enemy, continue staging plot after plot against the Atreides. The Emperor Shaddam is certain that his secret plan to obtain synthetic Spice is nearing success and start launching imprudent political and military blows without the counsel of his intimate supporter Count Fenring. The Bene Tleilax main investigator is planning to profit from "his" Spice and let down Emperor's hopes. This book is the best of the trilogy and all threads are neatly tied at its conclusion. I recommend this book to sci-fi lovers and general public

Published by Thriftbooks.com User , 13 years ago
This section of the the pre-dune set really ties things together well and keeps you involved in everything leading up to Frank's original book. I couldn't put it down.

Published by Thriftbooks.com User , 19 years ago
Kevin Anderson and Brian Herbert have pulled off a impossible feat: They have taken Brian's late father epic vision of the future and expanded the mythology surrounding the dune universe.This gripping conclusion concerns the House Corrino and in particular, The Emperor Shaddam IV who's lust to obtain absolute power will threatening the known universe!He and his chief henchman, the deadly count Fenring are hatching a plot with the sinister Tleilaxu to create a synthetic spice so he can control it's output and break the monopoly that the Guild has on the it. You will watch as mysterious Bene Gesserit Sisterhood will take Jessica away from Duke Leto who child she carries because the child is the subject of the Sisterhood's centuries old plot to create a superbeing.This novel has scenes of machivellian intrigues of the noble houses and spectacular battle scenes. You will wince in delight as the evil Baron Harkonnen tries in vain to change his terrible reputation he has in the Lansraad. Finally the novel ends with incredible battle scene upon the Planet Ix as Prince Rhombur has his change to free his people who have been enslaved by brutal Tleilaxu face dancers and harrowing kidnapping of Leto and Jessica's baby on the empire homeworld!The authors' world-building skills are alsways superlative as they show us planets and the cultures of this feudal galactic society. Anderson and Herbert should give themselves a well-deserved pat on the back in expanding the awe and mystery the surrounds this classic saga.

Published by Thriftbooks.com User , 20 years ago
I will keep it simple. Great Action. If you enjoy Dune, you should enjoy this book. I enjoyed the other 2 books in this series too, but I enjoyed this one the best. For me, it was hard to stop once I got going.

A superb finale to the Dune Prequel Trilogy!

Published by Thriftbooks.com User , 20 years ago
Say what you will about the writing skills of Brian Herbert and Kevin J. Anderson, their story makes for incredibly gripping listening. Especially with the superb vocalizations of reader Tim Curry.As I've noted in my reviews of the previous two readings (Dune: House Atriedes and Dune: House Harkonnen), Curry handles the reading duties with exceptional wit, zest and obvious enjoyment. His vocal renderings of the characters are nothing short of perfect.I bought this cassette edition the week it came out and I've been listening every day since. There are times when I simply don't want to get out of my car because I'm right in the middle of an action sequence and I want to discover how it turns out.The tapes begin with a bang -- Fremen attacking and easily verpowering sloppy, slumbering and drunken Harkonnen soldiers who are guarding an illegal stockpile of melange. From there, the story line jumps from the shortsighted, self-centered schemes of Emperor Shaddam Corrino to the synthetic spice research and manufacturing on IX to the relationship between Duke Leto Atreides and his concubine Lady Jessica to Prince Rhombur Vernius' attempts to return to his captured planet to...Let's just say there are so many plot threads and jumps to another world, another character, another violent plot from either Baron Harkonnen or Shaddam Corrino that you won't get bored. Not even slightly. Even though I know how the story eventually turns out (because of Frank Herbert's Dune book), I'm still caught up in the drama of it all -- relishing each plot unfolding.I haven't finished the tapes yet. But I can tell you I'm hanging on every word and I will, truly, be sad to see the story end.If you want to be highly entertained with a darn good story, and you have drive time to and from work or various locales, please don't hesitate to pick up this cassette series. That goes double if you've already spent time with the Dune world as seen through the eyes of Brian Herbert and Kevin J. Anderson. This chapter in the saga is better than Dune: House Atreides and on par with -- or even slightly better than -- Dune: House Harkonnen.Now, if you'll excuse me, I want to get back to the story...
Copyright © 2020 Thriftbooks.com Terms of Use | Privacy Policy | Do Not Sell My Personal Information | Accessibility Statement
ThriftBooks® and the ThriftBooks® logo are registered trademarks of Thrift Books Global, LLC