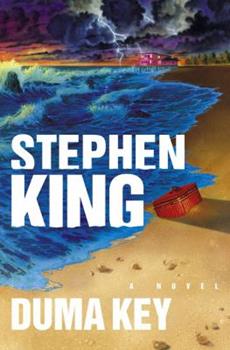 No more than a dark pencil line on a blank page. A horizon line, maybe. But also a slot for blackness to pour through...A terrible construction site accident takes Edgar Freemantle's right arm and scrambles his memory and his mind, leaving him with little but rage as he begins the ordeal of rehabilitation. A marriage that produced two lovely daughters suddenly ends, and Edgar begins to wish he hadn't survived the injuries that could have killed him...

King nails it with this one

Published by Ed , 4 months ago
I been reading King for 20 years and This is the first of his I READ TWICE, yes it was that good and I may read again in a couple years. Characters and story, conversations...BUT IT, you won't regret it

Published by Fred.xo , 11 months ago
Bought a “Very Good” condition of Duma key and this books dust jacket came ripped down the middle and the whole book was messed up.. I was so excited for this book as well

Published by Thebearjew , 1 year ago
Book showed up almost torn in half. Absolutely destroyed and unreadable. Very good condition, indeed.

Great book by Stephen King! Book is in great condition!

Published by LagunaLady , 1 year ago
I usually love Stephen King, it I just couldn’t get into this one. I am an avid reader and 73 years old. I have decided that if I haven’t become engrossed in a book by p. 100, it is gone! I don have the time or desire to force myself to finish books anymore. And certainly no essays to turn in This book got a lot of great reviews, but for me it was a waste of money.

Book is good but buyer beware.

Published by Laura , 1 year ago
My copy arrived without a dust jacket, not indicated anywhere in the description. That's info that should be included. Very poor representation of what you'll get.

The Master of the Macabre is BACK

Published by Thriftbooks.com User , 13 years ago
I've been a fan of Stephen King for years - since LONG ago. Since my days as a freshman in college long ago. I now have children in college-type of long ago; it's been that many years. My library includes all of his published novels. King is a prolific author, with many novels, novella, short stories, etc to his credit, and in areas not necessarily confined to horror. While a big fan of his work, until Duma Key, my favorites - the most chillingly frightening, were books published years ago. They had a certain "bite" to them. For those who cherish vintage Stephen King - "The Stand" and the like, the "un-put-downable", "Oh I'll read just one more chapter even if it is 2AM" King novels that sent a chill through your being... get ready to be delighted again. With Duma Key, Stephen King - the master of the macabre is back, and back with a vengeance. Long live the king. I promise you - this one you will not want to put down.

King Up To His "Evil" Tricks Again

Published by Thriftbooks.com User , 13 years ago
In recent months, I had given myself a bit of a break from Stephen King novels in order to try some other fare. However, after "coming back" to King with this book, I can say with confidence that King really is the master storyteller of our generation. For a short synopsis of this novel, it focuses on a middle aged man named Edgar Freemantle, who suffers a debilitating construction-site injury and decides to take a "year off" in a more tropical climate to help with his depression and broken marriage. While on his hiatus, in Duma Key, Florida, Edgar discovers and cultivates a seemingly unknown talent for drawing/painting. While that newfound talent seems to jumpstart his life again, it also dredges up a decades-old evil that haunts the Key. In typical King fashion, the real nexus of the story is the fight of the "simple man" (Edgar), his small group of friends, and a larger, nature-like evil that must be stopped (or at least contained) at all costs. Though those EXACT themes have played major roles in nearly ever post-Bachman King novel, they still resonate due to the fact that King's incredible character development. Thus, I highly recommend this novel not only to all Stephen King fans (you will read it regardless of what I have to say!), but also to anyone who just wants to immerse themselves into an interesting tale. If you can open your imagination, you (like me) will also come to realize the genius that King really is at his writing craft.

Published by Thriftbooks.com User , 15 years ago
This is one of the best books ever from one of the best American writers. Stephen King knows what scares us, and he's been proving it for thirty years, but this new novel adds a layer of humanity to the fantasy that makes it all the more surprising. Though the protagonist of DUMA KEY is ostensibly a divorced construction engineer with a latent talent for drawing, he is also clearly a stand-in for the author himself, making this arguably his most personal narrative. I won't reveal the hypnotically readable plot--it must be experienced to be appreciated--but I will say that Edgar Freemantle's living nightmare plainly echoes events in Mr. King's recent history. A life-threatening accident, like an illness or the loss of a loved one, puts many things in perspective, and DUMA KEY sometimes seems like a personal statement, a portrait of the artist that is as thrilling as it is vivid. For all its entertaining terrors, it is ultimately a celebration of life itself. I urge you to read it. Highly, highly recommended.

Published by Thriftbooks.com User , 15 years ago
I don't know about you, but ever since I heard that Stephen King was retiring from the writing game, I receive each new novel with both a since of joy and a sense of woe. Will this be the last? If it is, then King will be going out on a high note. Duma Key is pure Stephen King magic through and through. King allows the story in Duma Key to develop slowly. Some will say the story drags or that King is too wordy. Not so. King uses the slow pace to develop the sense of atmosphere that readers have come to expect. Vivid writing, with wonderful descriptive sentences, and deep, three dimensional characters, Duma Key will hold your attention. Edgar Freemantle is not really your typical King character. He is sympatheic but with an edge. Injured in a very freaky (are there any other kinds in any book written by Stephen King?) accident at a construction site he finds that life has changed for him; really changed. Severly disabled, his wife eventually deserts him and he retires to Duma Key. The story winds on and the script gets tighter and tighter. I will tell you that as the story winds on you'll see a number of plot surprises. Typical Stephen King. Finally, is Duma Key just a little autobiographical? I don't know and Stephen King is the only one that can answer that. Going through the pain of his near fatal accident I am sure has given him material to draw on. I suspect that his experiences as a result of his accident had made Duma Key a richer novel. Duma Key is a long read but it passes quickly. Give it a try. Peace to all

One of Stephen King's best

Published by Thriftbooks.com User , 15 years ago
Yes, it's scary. Yes, it's long. But this new novel is more than just another Stephen King book. With a streamlined style and a plot that's never predictable, it's King at his crisp, clear, page-turning best. Before you read further, let me acknowledge I'm incredibly biased here. Not only have I been a Stephen King fan ever since 1975's 'Salem's Lot, I live on a small island off the west coast of Florida, exactly where this story takes place. Great sunsets, a beach lined with huge rental homes, a populace of "the newly wed and the living dead".... they're all part and parcel to this story, and all around me as I sit here typing on my little porch. Beyond the colorful setting, "Duma Key" combines the concepts of bodies gone bad and creativity gone wild -- typical King material -- with the everlasting powers of friendship and love. It's a great beach read, an outstanding character study, a terrific horror story and, eventually, an uplifting tale of moral redemption. Obviously that's plenty of raw material, but King masters it all, with a writing style that's better than ever. As always his imagery is simply stated yet memorably vivid -- waves, for example, crash on the beach with the sound of "the breath of some large sleeping creature" -- and even the most basic sentences and paragraphs have a perfect mix of energy, grace and wit. This time, however, King really takes his time, with a slow pace that allows for plenty of character development and story detail. Lead character Edgar Freemantle is a bit edgier than the standard King protagonist (he loses his arm in a freak accident, and has trouble controlling his rage) and I was especially riveted by the portrayal of the old woman Elizabeth Eastlake, a lifelong islander with Alzheimer's disease. Some of the best moments occur when nothing much is happening, such as when Edgar argues with his wife or the many times he struggles with his sanity. Eventually, of course, the plot takes off with a vengeance, and soon the pace winds so tight that by the time terror knocks at the door, you just know it's coming in. I don't know if I've ever pored through so many pages so fast. My other favorite Stephen King books are: The Shining The Stand On Writing

Duma Key Mentions in Our Blog