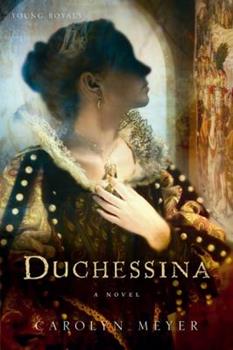 (Book #5 in the Young Royals Series)

Young Catherine de' Medici is the sole heiress to the entire fortune of the wealthy Medici family. But her life is far from luxurious. After a childhood spent locked away behind the walls of a convent, she joins the household of the pope, where at last she can be united with her true love. But, all too soon, that love is replaced with an engagement to a boy who is cold and aloof. It soon becomes clear that Catherine will need all the cunning she can...

A sympathetic potrayal of the young Catherine de' Medici.

Published by Thriftbooks.com User , 12 years ago
Orphaned at a young age and heir to a vast fortune, Catherine de' Medici was one of the wealthiest young women in 16th century Europe. But that did not make her childhood happy. For her own protection, she was kept locked in her home or secluded in a convent for most of her early years. After three years at the convent, she is finally set free, only to learn she is to be married to Henri II, prince of France, in a political union. Married at the young age of fourteen, Catherine's marriage is not happy. Her husband is not interested in her, preferring his much older mistress. Catherine knows that in order to secure her future, she must produce a male heir. In order to survive in the world she must live in, she determines that she will use her skill and cunning to outwit, out scheme, and outlast her enemies, shaping her future as one of the most powerful and feared Queens in history. Although Catherine de' Medici is not the most likeable of historical figures - she was known as a cruel and manipulative queen who ruthlessly eliminated her enemies - author Carolyn Meyer manages to make her a sympathetic young woman in this novel, telling of the events that helped shape her later character. I highly recommend this novel to teen readers who love historical fiction. It is a very fascinating look at a famous queen who is not often written about in young adult fiction.

Published by Thriftbooks.com User , 13 years ago
parents being dead catherine was only seen as politcal pawn to use by her family.she deal with the lose of people who truly care for her,become a strong smart woman.she married a french royal in love with another woman.but she become queen help rule with her sons.becoming most powerful woman in the rule.

Published by Thriftbooks.com User , 13 years ago
Duchessina like most books by Carolyn Meyer was amazing. It talkes of a young girl woes family falls from power in Italy. she depratel put in a covent for her own protection. I loved this book and sugest it to most of my friends.

Published by Thriftbooks.com User , 13 years ago
When I was finished with this book, I hated it. I thought that the author made Catherine seem like a heroine, when in reality (from what i have read) she was more of a "bad girl"! But after reviewing the book in my head after a few days, i realized how much i liked the book. It's a very fast read-things certainly don't turn out the way you would hope. so if you are a hopeless romantic reader...don't read it. but i learned a lot about that era in time. I liked it.

Published by Thriftbooks.com User , 14 years ago
Catherine de'Medici, Duchessina, grows up in a palace in Florence where her family rules the city. When her family falls out of power, she must flee. She becomes imprisoned within the walls of convents for her protection against the angry mob that calls for her death. At the first convent, the nuns make their hatred of her family no secret. The Duchessina lives in misery, enduring the pain as best she can under the circumstances. Finally, the tides change and her family once again controls not only Florence but the papacy as well. The Pope, her old guardian, calls for her to live in Rome until he can make arrangements for her future. As one of the richest woman in Europe, the Pope intends to make an advantageous marriage. He marries the Duchessina off to the Dauphin of France. The Dauphin cares little for his new wife and Catherine's misery continues, but she creates advantages to help ease her pain and eventually finds contentment. A wonderful outlook on the creation of Madame Serpent, remembered in history as the "girl who endured." Carolyn Meyer takes another historical princess and adds strong characters and rich details to spin a delightful tale. Reviewed by: Jennifer Rummel
Copyright © 2020 Thriftbooks.com Terms of Use | Privacy Policy | Do Not Sell My Personal Information | Accessibility Statement
ThriftBooks® and the ThriftBooks® logo are registered trademarks of Thrift Books Global, LLC