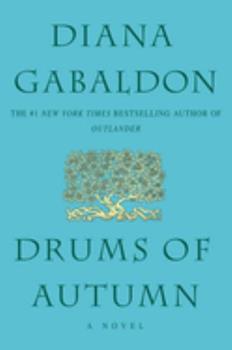 (Book #4 in the Outlander Series)

In this breathtaking novel--rich in history and adventure-- The New York Times bestselling author Diana Gabaldon continues the story of Claire Randall and Jamie Fraser that began with the now-classic novel Outlander and continued in Dragonfly in Amber and Voyager . Once again spanning continents and centuries, Diana Gabaldon has created a work of sheer passion and brilliance.... It began at an ancient Scottish stone circle. There, a doorway, open...

Bought as a gift

Published by Debbie , 1 year ago
I bought #2 - #5 in the series and it state in "good" condition. There were in good to even better condition. You can tell they have been read before but the person I'm giving them would rather reuse/recycle so this is a win win buy. Great prices - going to buy myself some books soon :)

Takes hold of you from the start!

Published by Thriftbooks.com User , 3 years ago
Pack your bags because you are taking off on a great ride. You're up, you're down, you're trying to catch your breath before zooming off again. I loved it!!!

The Frasers Build A New Life In America - Outstanding Drama!

Published by Thriftbooks.com User , 17 years ago
"Drums Of Autumn" is the fourth book in Diana Gabaldon's extraordinary "Outlander" series. It amazes me that Ms. Gabaldon has been able to continue to delight readers with her consistently good writing, excellent plots, superb characters and meticulous historic research for thousands of pages and four novels. "Drums Of Autumn" most certainly will not disappoint fans of the series. If you have not read the three preceding novels, I strongly urge you to do so before beginning this book. "Drums of Autumn" may be able to stand as a novel in its own right, but I think it would be too confusing to enjoy it thoroughly without having read the historic and personal drama that Ms. Gabaldon details so well in her previous books. To label the "Outlander" series as merely historical romance fiction would be to do it a terrible injustice. This is an epic historical romance, yes...and so much more. The relationship between Claire and Jamie is one of the most caring and intimate I have ever encountered - in fiction or real life. This is a couple who are solidly committed to a life together for better or worse. Theirs is a love that truly transcends the boundaries of time.More than twenty years before this novel begins, Claire Beauchamps Randall, vacationing in post WWII Scotland, stepped through the ancient stone circle known as Craigh na Dun - and was suddenly sucked back in time to 1743 and war-torn Scotland. It was here that she met and married her own true love, highlander James Fraser. Before the tragic battle of Culloden Moor she was forced to return to the 20th century to protect herself and her unborn daughter, abandoning Jamie in the process. Two decades later Claire made the journey back through the stones to reunite with James in the 18th century, leaving their grown daughter, Brianna, behind.James and Claire both agreed that there was no possibility to build a life for themselves in Scotland. The clans had been forced to disband, the people were starving and living in abject poverty, most of the men were dead, crippled, imprisoned and or jobless as a result of the doomed Jacobite uprising. The Frasers along with a few friends and James' nephew, Ian, cross the Atlantic and make their way to North Carolina where Jamie's aunt has a plantation. At the same parallel time, 20th century Brianna and her beloved Scottish boyfriend Roger discover some terrifying information about Claire's and Jamie's fate. Brianna is determined to reach her parents somehow and warn them of coming events, hoping to change the future. The inevitability of these events and the frustration and inability to change the future continue to be strong themes.This is a phenomenal novel! Ms. Gabaldon details frontier life in beautiful 18th century North Carolina so clearly and accurately that one literally feels swept back in time. Claire and James have grown tremendously as characters, as have the love and intimacy between them. I have never experienced a couple as unique as these two i

HOW DOES GABALDON KEEP WRITING THESE PAGE TURNERS?

Published by Thriftbooks.com User , 18 years ago
I am starting to get a little sad at the prospect of soon finishing these books! What will I do with my life? I do know that I will really miss these characters.I agree with many of the previous reviewers about Brianna (even 30 years ago girls were being 'sent off' to have illegitimate babies)--I can't imagine what reactions would have been 200 years ago. Wouldn't Jocasta have kept her hidden? And why didn't she tell people that she was 'handfasted' when her pregnancy was discovered? It's also ironic that Claire is always saying that Brianna is stubborn just like Jamie. Claire is pretty stubborn herself! I did enjoy Roger and Brianna's story though.I disagree with previous reviewers about DRUMS OF AUTUMN needing a villain. Bonnet is extremely dastardly, isn't he? Frankly I'm glad Black Jack is gone!I loved this novel as much as the first three. The writing is exceptionally beautiful and as we have grown accustomed, the plot is compelling. As usual, something is happening on every page and I enjoyed the fact that Jamie and Claire have settled down (sort of!). The last few pages of this 'bonnie tale' are so poignant and touching that I was moved to many tears!I have learned so much about Scottish and Colonial history; this is a historical novel with large doses of romance, adventure, and fantasy to boot. And best of all is the love story of Jamie and Claire: "Your face is my heart, Sassenach," he said softly, "and love of you is my soul." Or, "And when my body shall cease, my soul will still be yours Claire--I swear by my hope of heaven, I will not be parted from you." And, "You are my courage, as I am your conscience," he whispered. "You are my heart--and I your compassion. We are neither of us whole, alone. Do ye not know that, Sassenach?"I recommend these books to anyone who loves to read; they will touch your heart as they have mine!

Published by Thriftbooks.com User , 20 years ago
"Time travel, not my cup of tea " I thought when I first came across this book whilst researching novels set in 18th century North America.I like my historical novels with a dose of realism, not fantasy. And , frankly, the rave reviews of this and the preceding volumes made me wonder."Drums of Autumn" is the fourth in a series in which a 20th century Englishwoman is transported to 18th century Scotland, falls in love with a dashing native called Jamie , marries him, and has lots of adventures. But , as I found, not having got into the whole "Jamie and Claire "thing was no bar to enjoyment of this novel at all.The sterling quality of the writing drew me in and never let up. How can it be that a book of 800 pages whithout much of a plot still seems too short? Gabaldon is an excellent storyteller who brings her characters - and their surroundings - vividly to life. It is a mark of her skill that she manages to make an existing relationship sound new and exciting .(If you think that's nothing special, have you ever wondered why most novelists abandon their characters after courtship? As in life, so in fiction people find it much harder to sustain than to start new).And the device of time travel succeeds extremely well in dealing with the dilemma of the historical novelist: the desire to go back in time and fix things, to apply modern thought to a historic situation. We feel with Claire's outrage at slavery, bodily punishment and everyday cruelty, thoughts that would be anachronistic in a character of the period. Because she is a modern creature, Claire can voice these thoughts, if not act on them.For me, a particular gem was the deeply moving tale of another time traveller whose remains Claire stumbles across and who appears as a ghost to save her life. The story of his failed attempt to change the past and warn his people is revealed on the occasion of a visit to an Indian village, whose residents refused to believe his prophesies of doom.Claire of course knows the future but also knows that she is powerless to change the past. If you could go back in time, who would you try to warn?

Just as riveting as the first three!

Published by Thriftbooks.com User , 21 years ago
After approx. 3600 pages of Gabaldon's books I am still yearning for more. Drums of Autumn is yet another fantastic addition to this series. This book is just as pleasing as the previous three, rich with imagery, historically interesting, along with the comfortable presence of Claire and Jamie that I have grown quite fond of throughout this series. Gabaldon continues to keep the story interesting by introducing new characters and saying good-bye to some, creating new drama, but also bringing back and reminding us of some characters from the previous books. This leaves you wanting more, knowing there is more to be told about all of these characters and how their lives will weave into the web of Jamie and Claire's.The pace is a bit slower in this book (but by no means boring), this helped me slow down a bit, enjoy the language(s), revel in the imagery and prepare myself for the break I am now forced to take waiting for the next installment of Jamie and Claire, Brianna and Roger. I am left feeling "what will I read now?" I highly recommend all of the books in this series to everyone. Gabaldon is a wonderful writer!

Published by Thriftbooks.com User , 21 years ago
I was originally prepared to be partially disappointed with this book as a few of the other reviews had left me with the mistaken impression that it didn't deliver. Much to my delight, I LOVED Drums of Autumn! It delivered all of the goods and more. I was also thoroughly taken with the preceeding 3 books in the series. With Drums, I found enjoyment in Jamie and Claire being comfortably together, secure in their love for one another and settled in their new home. This book, like the other three, was filled with laughter, tears, romance and adversity. It dealt with each characters emotions perhaps even better than in the preceding novels because it took it's time - I for one enjoyed the slower pace (but never, never a boring one). I liked the addition of Brianna and Roger's story as well as John Grey's continued presence in the lives of our hero and heroine. I can't wait to see what happens next - the introduction of Stephen Bonnett as well as Will's reappearance should make for some interesting story plots in the next 2 books! I have never been so taken with any characters as I have with Jamie and Claire. Diana Gabaldon is a phenomenal writer - she speaks directly to my heart and sense of adventure! I recommend this as well as every book in the Outlander series - 5 stars for all.
Copyright © 2020 Thriftbooks.com Terms of Use | Privacy Policy | Do Not Sell My Personal Information | Accessibility Statement
ThriftBooks® and the ThriftBooks® logo are registered trademarks of Thrift Books Global, LLC