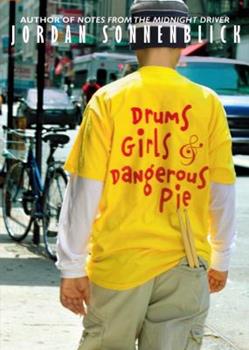 From first-time novelist Jordan Sonnenblick, a brave and beautiful story that will make readers laugh and break their hearts at the same time. Thirteen-year-old Steven has a totally normal life: he plays drums in the All-Star Jazz band, has a crush on the hottest girl in the school, and is constantly annoyed by his five-year-old brother, Jeffrey. But when Jeffrey is diagnosed with leukemia, Steven's world is turned upside down. He is forced to deal...

You do not want stop reading

Published by Thriftbooks.com User , 12 years ago
You know those books you don't want to take out of your hands and you search for words to describe what you liked about it...Well this is one of them. This book, written from the point of view of a thirteen year old boy, who sees himself confronted with the fact that his five year old brother has cancer. It's straightforward, with no exaggeration. A work, full of wisdom that shows how we much too often think about things we can't change instead of seeing what we can. Another book that opens the door to seeing other possibilities one can choose in life isWorking on Yourself Doesn't Work: The 3 Simple Ideas That Will Instantaneously Transform Your Life Give yourself the gift of both these books!

Published by Thriftbooks.com User , 15 years ago
"The most annoying thing in the world is...My little brother, Jeffrey." That's what 13-year-old Steven Alper had written in his journal for his English class. But on October 7th, everything changed. Jeffrey had a small accident in the kitchen, was taken to the emergency room, and was diagnosed with leukemia. Steven's life turns upside down, and just when he needs his parents the most, his mom has to spend most of her days at the hospital taking care of his brother, and his dad is mostly keeping to himself, too worried about the bills to spend time with or even talk to his oldest son. Steven wants to believe that everything will just go back to normal, and tries to release his anger, anxiety, and fears by playing the drums. But his brother doesn't seem to be getting any better, and Steven has a hard time concentrating at school, he's not turning in his homework, and his grades are starting to fall behind. To make things worse, he doesn't want anyone to find out what is going on--but somehow his best friend, Annette, the school counselor, and even Renee Albert, the hottest girl in the eighth grade, all seem to know that something is not right. This unforgettable novel took me on an incredibly moving ride. And when I felt I was all the way down on this emotional roller coaster, and found myself struggling to see the words through my tears, Sonnenblick lifted me up gently, word by word, page by page, and put a grin on my face that eventually turned into a big smile and then an out-loud laugh. The author's great voice shows real characters with real feelings, and the true struggle of a teenager trying to understand the unfairness of a deadly disease, and how to cope with the fear of losing his beloved little brother. So you think your little brother is a pest? You will think again after reading this touching story. Tissues are highly recommended. The paperback edition of DRUMS, GIRLS, & DANGEROUS PIE also includes a section with an interview, information about the author, tips on writing, and a preview of Jordan Sonnenblick's next novel, Notes From The Midnight Driver. Reviewed by: Christian C.

Published by Thriftbooks.com User , 16 years ago
DRUMS, GIRLS & DANGEROUS PIE starts out breezily enough. Told in the sarcasm-laced voice of 13-year-old Steven, the novel describes his various adolescent trials and tribulations, all of which are familiar yet still cringe-worthy --- he has a crush on the hottest girl in school, has an angelic-looking yet demonic little brother named Jeffrey, and his parents irk and annoy him constantly. With a droll and ironic tone, teacher and first-time novelist Jordan Sonnenblick paints Steven both convincingly and with enough color to make him an amusing and compelling narrator. Readers will be ready and willing to let Steven narrate the woes of adolescence for 273 pages, without expecting anything more or less from the novel. Steven's story takes a sharp turn, however, into potentially over-dramatic emotional ground when Jeffrey's nosebleeds turn out to be an indicator of something serious. Yet Sonnenblick handles Steven and his family's reactions to Jeffrey's diagnosis and the onslaught of his illness with an admirable balance of humor and compassion. Jeffrey's initial question to his mother after they return from the hospital in Philadelphia is, "So Mom, everything's OK right? This whole cancer mistake is sorted out?" And Sonnenblick's treatment of the different reactions of Jeffrey's parents --- Steven describes his mother as "weepy" and his father as "a zombie" --- is both nuanced and realistic. Steven has to break his parents' emotional states into simple, one-word summations, because he fears grappling with the extent of what they're going through and why; by acknowledging the complexity of their anguish, he must acknowledge the fact that his brother might die. It takes a while for Steven to come to terms with Jeffrey's illness, and the process is rendered thoughtfully and without cliché. Reflections such as "Once I was forced to believe that Jeffrey really had cancer my mind played another big trick on me. I started to think that if I just made the right promises to God. He would magically make Jeffrey better again" and Steven's frustration with teachers who call him a "trooper" are perfect examples of the little details that make this novel so honest and real. Steven's attempt to get a handle on all the anxieties that surround the progression of his brother's illness, while trying to balance school dances, drumming solos and head-over-heels-crushes, is handled with equal candor. Steven is not the only remarkably credible character; his parents, his teachers, his brother and even his crush, Renee, are all well-drawn and believable. The fact that this novel never relies on formulaic plotlines or stock characters is no doubt due to the author's own experience with having a family member diagnosed with cancer. Sonnenblick has an obvious desire to present the potentially melodramatic and sappy subject of cancer with frankness, never shying away from conveying the uncomfortable realities of living with someone who is sick. The result is this honest,

Published by Thriftbooks.com User , 17 years ago
This debut by Sonnenblick is fast becoming the most popular book in my middle school library. The kids seem to crave novels that deal with boys and girls just like themselves who are going through challenging times. Add to that some howlingly funny middle school situations, and you've got a real hit! Best of all, our readers are learning that, while life isn't always fun or fair, they do have the strength to cope and make the best of tough times.

perfect for middle school (and the rest of us)

Published by Thriftbooks.com User , 17 years ago
I teach 7th grade English and had my class read this book. In addition, the 6th and 8th graders will also be reading it and most of our faculty has read it, too. The response has been overwhelmingly enthusiastic--several students named this book their favorite. Many teachers have told me that it made them laugh AND cry. Sonnenblick captures the everyday angst of being in middle school--with all its humor and foibles. It's a very honest portrait of a typical middle school student dealing with a very tough situation.
Copyright © 2020 Thriftbooks.com Terms of Use | Privacy Policy | Do Not Sell My Personal Information | Accessibility Statement
ThriftBooks® and the ThriftBooks® logo are registered trademarks of Thrift Books Global, LLC