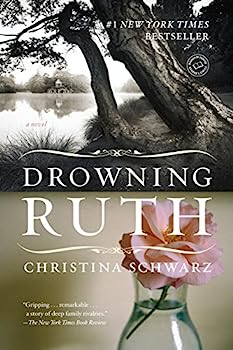 Deftly written and emotionally powerful, Drowning Ruth is a stunning portrait of the ties that bind sisters together and the forces that tear them apart, of the dangers of keeping secrets and the... This description may be from another edition of this product.

Published by Kristin , 11 months ago
3.5 stars---There was just enough suspense to keep me engaged however, the plot wasn't that twisty. While I enjoy novels told through the voices of several main characters, I found this one more difficult to follow since the readers are being thrust back and forth from past and present.

Published by Thriftbooks.com User , 16 years ago
With its vivid depiction of its post-World War I setting in Wisconsin, its nightmarish complexities as a family saga, its carefully developed suspense, and its simplicity of theme, Drowning Ruth has "blockbuster movie" written all over it. Its selection by Oprah has guaranteed its popular success as a novel. The above statements should not be regarded as negatives, however. Drowning Ruth is a terrific read! The author is precise and careful about building her suspense with excruciating slowness. She has created intriguing characters--at heart, not all that different from you and me--characters who are confronted with difficult problems to solve, some of which are not of their own making and some of which are the unexpected results of desperate decisions made in the long ago past. Her alternations of point of view help to give breadth and depth to the conflicts within the main characters, while the fragmentary memories which Ruth contributes add to both the mystery and the sense of dread. Although Schwarz ably illustrates the restricted roles into which women had to adapt themselves during the period, the mores which applied to "good girls," and the limited choices open to them, the lack of liberation is so natural a part of her story that her novel and its complications are by no means part of a liberation manifesto. Drowning Ruth is a simple story presented clearly and suspensefully by an author who, like Amanda, is careful to keep her grasp completely within her reach. Mary Whipple

Published by Thriftbooks.com User , 18 years ago
DROWNING RUTH is deceptively clever. What seems initially like the conventional, usually predictable murder yarn turns out actually being a meticulously crafted story of considerable artistic merit. The circumstances of the drowning of Ruth's mother serves as the catalyst that precipitates an intriguing flow of interrelated events in the lives of Amanda (the drowned woman's sister) and her niece Ruth. Christina Schwarz is a wonderfully talented writer who has woven a rather intricate tale of psychological suspense. There are many engrossing trwists and digressions (but quite necessary) in this very emotional marrative. The mystery is sustained throughout because the reader, as if carefully and thoughtfully fitting together all the jagged pieces of a puzzle, learns in successive chapters what actually occurred that particular wintry night so long ago in the past of both Amanda and Ruth. The writer does a marvelous job in pacing the delicate unravelling of the knitting. This is a thoroughly enjoyable thriller.I recommend this book very highly.

Published by Thriftbooks.com User , 21 years ago
Drowning Ruth is a beautifully written story, with a plot that will have you on the edge of your seat. The way in which Schwarz unravels her tale could be likened to William Faulkner. Each chapter revealed a new layer in the plot, and I relished every one. I found myself concocting many possibilities for Ruth's drowning; it was only at the end that I could fully comprehend what happened - I can't say that about many books I read. The raw emotion I felt reading the ending of the book therefore felt real, not "manufactured" or sentimental.

Published by Thriftbooks.com User , 21 years ago
I rarely send in reviews of books, but "Drowning Ruth" moved me to add my voice to the crowd. This is by far the most interesting and engrossing novel i have read in a very long time. I love it when I find myself sinking into the story, into the characters, and that is exactly the feeling I got when reading this novel. The writing is so good that it carried me away, to another place altogether, to a cold Wisconsin lake in the winter. Christina Schwarz paints such a compelling picture of the sisters' relationship that I felt almost a part of the scene. In fact, all of her characters are so vivid that i feel as though I would recognize them walking down the street. And the story itself is a page-turner. Anyway, BUY IT!! READ IT!!
Copyright © 2022 Thriftbooks.com Terms of Use | Privacy Policy | Do Not Sell My Personal Information | Accessibility Statement
ThriftBooks® and the ThriftBooks® logo are registered trademarks of Thrift Books Global, LLC