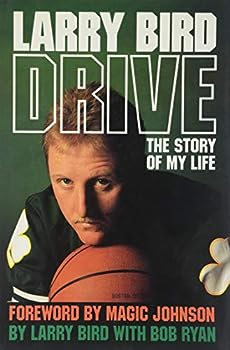 "Of all the people I play against, the only one I truly fear is Larry Bird."--Magic Johnson, from the Foreword. The heart and soul of a champion: his life, his career, his game. To understand... This description may be from another edition of this product.

Great book for anyone

Published by Thriftbooks.com User , 18 years ago
The book "Drive" is an autobiography on one of the greatest basketball players and legends to ever step on the court and play the game of basketball. This book is about how Larry Bird grew up in the small, poor town of French Lick, Indiana. His father, Joe Bird, was a hard worker who bounced around from job to job just to keep his family above water, while Larry's mother, Georgia Bird, worked and took care of the family. Both parents worked eighty to ninety hours a week for $100 to $150. This was hard for Larry growing up because he wasn't able to spend time with his parents in his childhood. His parents were soon divorced so they wouldn't need as much money for the family with his dad gone. They would now have money from child support and money coming in from Georgia Bird's two jobs. Among the entire family troubles, Larry's father, Joe Bird, committed suicide in his parent's house with a shotgun.When Larry was younger he never really liked the sport of basketball. He was more interested in baseball and football. The two sports never ended up working out for him in the long run. Larry didn't start to take an interest in basketball until he was about thirteen years old when he was shooting around with some kids from his grandmother's neighborhood. He realized that basketball was his true love when he wona big game for his team as a sophomore in high school. By his junior and senior year in high school he was nery successful, scoring 40 points a game. He was the team's savior. After high school, Larry went to Indiana University and after a few weeks of being there he left. A while after being out of school he was invited to work out with the Indiana State University's basketball team and decided to go. He instantly knew he would fit in with the teammates and knew it was going to be good competition, which is what he liked. He later enrolled himself there. At the end of his junior year in college the Boston Celtics Franchise chose him sixth in the 1978 NBA draft. He decided to stay in school and graduate instead of going to the NBA. During his senior year, he led his team to the NCAA championship game against Michigan State University and his soon to be rival Magic Johnson. His team lost the game. Larry was the first Bird to graduate from college. After graduation he negotiated a contract with the Boston Celtics Franchise. During his career he won numerous amounts of MVP awards and several championship rings with the Celtics.This book had many things that made it great, but at the same time there were also things that took away from its greatness. In the beginning the chapters were very short but had a lot of detail of how he grew up and the problems he faced. As for the words he used and the flow of the sentences, it was well written. There are quite a few misprints in this book but it is still easy to understand and follow. Overall this book was very easy to understand and Larry describes the things him and his family

Published by Thriftbooks.com User , 21 years ago
This book truely is a great basketball book. Obviously written by one of the NBA's greatest players, you get to be in the mind of Larry Bird, and see for yourself what he was like, from his point of view. The book spends the majority of the time on his NBA because of the success he had as a player. I really liked the fact that Larry gave his respect to his opponents and their fans, and that he didn't write from a egotistical stand point. There were only two things that I think could've been better the book, the first was that it didn't really talk too much his work ethic in his high school years. It did mention it occasionaly, and obviously we know he had a great work ethic, it just didn't mention it much. The other thing was the Indiana State-Michigan State rivalry. Again, it mentioned it, but it didn't talk about it that much. Overall, I loved the book and I think you will too! Read it!

Published by Thriftbooks.com User , 22 years ago
this is a Great Book on one of Basketball's Greatest Player's & minds.Bird tells of his Nba Career & His Relationships with Indiana State,The Boston Celtics,Magic Johnson & His View on the NBA on a Whole.Bird was something else on the COurt & Off as a Coach.A Must Read.

This is and inspirational book

Published by Thriftbooks.com User , 23 years ago
The heart and soul of a champion: his life, his career, and his game. To understand basketball, you have to understand Larry Bird. Arguably the greatest all-around player the game has ever known, he led the Boston Celtics from the basement to three world championships, collecting three NBA Most Valuable Player awards along the way. Yet, despite these massive accomplishments, Bird has rarely talked to the press, and much about the man has remained a mystery. Now in Drive, the long-silent superstar sets the record straight, revealed a side of himself, and of basketball, you've never see before. Larry Bird grew up in the small town of French Lick, Indiana. His family was not very well off. Infact, they would occasionally stay at his grandmother's home. When Larry was twelve he found that he had a God-given ability to play basketball. He knew he was blessed and knew he had to do something about it. Everyday Larry would practice, practice, practice. Shooting foul shots, threes, it didn't matter, he just love the game. Even when he broke his ankle he would still shoot free throws every day. Larry's father committed suicide when Larry was still young. This broke his heart, but he knew his father did what he thought was best for the family. Bird was a celebrity on his High School basketball team in French Lick. The population of the town was only 2,100, but 4,000 people attended his last HS game. After high school he enrolled at Indiana, but never played, dropping out and then hitch-hiking home. He waited a year to be eligible to play at Indiana State. He brought respectability to the Indiana State program which ended in losing to Magic Johnson's Michigan State team in the NCAA Tournament Title Game in 1979. Larry left Indiana State with a career scoring average of better than 30 points a game, fifth all-time in NCAA history, and a 3-year school record of 81-13. Larry was named the 1978-79 Sporting News Player of the Year and won the Naismith and Wooden Awards. He was the number six pick in the 1978 draft by Boston, as a junior, but he joined the team a year later, because he chose to stay in school for his last year of eligibility. His stellar play in his first year led to his Rookie of the Year selection in 1980. We all remember his ability to hit the remarkable shot and don't forget his commercials with Michael Jordan where he makes the unbelievable shots. NBA players probably still have nightmares of his smooth jumper that would fall with deadly accuracy from ten feet or twenty feet. There may never be another with such a consistent sweet stroke. However, the legendary Celtic charm could not jump. He was slow, uncoordinated, but if you gave him a locomotive to pull he could do it for you. I'm not saying he was buff or strong or anything, I just mean he was a workhorse. He would not give up. Bird's all-time stats are an impressive: 21,791 points (11th. all-time), 1,556 steals (8th all-time), 0.

Published by Thriftbooks.com User , 23 years ago
This book tells the greatness of Larry Bird. Excellent ! A MUST READ
Trustpilot
Copyright © 2022 Thriftbooks.com Terms of Use | Privacy Policy | Do Not Sell or Share My Personal Information | Accessibility Statement
ThriftBooks® and the ThriftBooks® logo are registered trademarks of Thrift Books Global, LLC