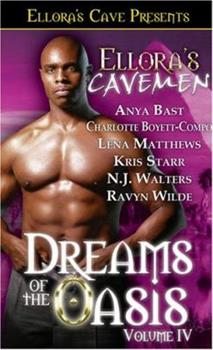 One of the best Cavemen books Ellora's Cave has come out with so far!

Published by Thriftbooks.com User , 15 years ago
GETTING SLAYED by Anya Bast Princess Jeweline is fed up with being a virgin and her chaffing chastity belt. The simple fact that she's still untouched is because of the fire breathing-dragon who's charbroiled all seven of her fiances. Obviously if she's ever going to have sex she'll have to take care of the dragon herself. What will Jeweline do when she actually meets up with the dragon and discovers he's not what he seems? Or when dragonslayers begin arriving hoping to win her hand in marriage by killing the dragon named Marcus? Anya Bast does a fabulous job with this tale! You get a headstrong princess with a dragon that runs amok destroying any chance Jeweline has of ever having sex. This story is both comical and endearing. STING OF THE WIND by Charlotte Boyett-Compo Shannon O'Rourke is one of the privileged few humans to work among the supernatural beings at Durbin Enterprises. She takes great pride in the strides the company has made in medical research on blood diseases and the blood bank that aids both human and otherworldly creatures. As Shae Durbin's special personal assistant, she gets the benefit of his expertise and loving which he's perfected over the past five hundred years. I've often jokingly said that hospitals and blood banks have vampires in the basement so I got a real kick out of this whole storyline. Charlotte Boyett-Compo has contributed a fun storyline with truly likeable characters. TEMPERATURE RISING by Lena Matthews Brenna Cole has had a huge crush on her brother's best friend and neighbor Danner Austin for as long as she can remember. Since her brother has asked her to house-sit, she fully intends to seize the opportunity to show him just how much she's grown up. She doesn't count on the extreme heat wave or rolling blackouts. Things are definitely going to heat up when the electricity goes out. I've always loved Lena Matthews gutsy take-charge characters and homey realistic situations. This is a very fun story to visualize especially when Brenna's brother returns home earlier than expected. VIRTUOSITY by Kris Starr Commander Dillon Walker has spent the past three years reeling from the wrongful death of her husband during a mission to an alien planet. After visiting with some of her fellow crew members and hearing of their experiences in the HoloSuite, Dillon figures a virtual lover, Aiden, would satisfy her physical needs without risking her heart. Or could Aiden be more real than she thought? I found Kris Starr's VIRTUOSITY to be poignantly heart touching. If you've ever suffered the loss of a loved one then you'd know just how hard it is to go on with life and I admire Dillon for her courage even if it is only with a virtual lover. SHADOWS STIR by N.J. Walters The fate of the Warriors of the Shadow Realm lies in the hands of a mortal woman. The Shadow Lord will do whatever he has to in order to save his kind and so he sends one of his Ryders, Gideon, to protect her. Jo Harris
Copyright © 2022 Thriftbooks.com Terms of Use | Privacy Policy | Do Not Sell My Personal Information | Accessibility Statement
ThriftBooks® and the ThriftBooks® logo are registered trademarks of Thrift Books Global, LLC