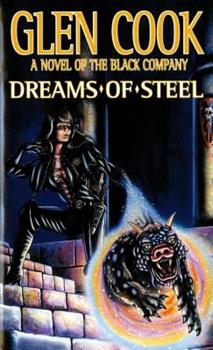 Dreams of Steel (The Fifth Chronicle of the Black Company)

"Dreams of Steel" is Book 5 in Glen Cook's fantasy masterpiece, The Chronicles of the Black Company.Croaker has fallen and, following the Company's disastrous defeat at Dejagore, Lady is one of the few survivors determined to avenge the Company and herself against the Shadowmasters, no matter what the cost.But in assembling a new fighting force from the dregs and rabble of Taglios, she finds herself offered help by a mysterious, ancient cult of murder...

Published by Thriftbooks.com User , 16 years ago
Love the Black Company, plain and simple. If you're going to read one, you've got to read them all and in order. If you haven't read the books prior to this one in the series, you need to. And if those don't convince you to read the entire series, there is nothing I can say in this review that will.

What a book, just ace.

Published by Thriftbooks.com User , 20 years ago
I really enjoyed every bit of Shadow Games and Dreams of Steel. And my four Favourite Characters, Croaker, Lady, One-eye and Goblin. I was very happy Cook decided to write things from Lady's point of view. I gotta agree with an earlier review, if Cook continued writing operation's like in the first few books, they would start to get boring, but what Cook has done has taken you to a different culture, which you must work you way's around. Cook has set up obstacle's which the company has never had to deal with before. Cook has set up for something very big. And I can't wait to read the next books.

Published by Thriftbooks.com User , 21 years ago
I`ve read some reviews that were less than glowing about this title. But in a series that runs through ten volumes some effort has to be expended to hold all the plot lines together. The first few times I read Tolkien's Two Towers, it was my least favorite volume of the Lord of the Rings. Because it mostly just maintianed a multitude of plot lines. Over the years, Two Towers has become my favorite. Dreams of Steel has a similar function in the Black Company series. It tells a necessary part of the story. It also demonstrates Cook's ability to develop a character. Lady may not have been the ideal analyst, but then, neither would One Eye. So Dreams of Steel is presented as the work of a less than perfect chronicler. Dreams of Steel is a great read and an important part of a great epic tale. I recommend it for any Glen Cook / Black Company fan.

Published by Thriftbooks.com User , 21 years ago
One of the recurrent themes in the Black Company series is the importance of recorded history through the eyes of the Company Annalist and throughout Croaker's books we have gotten used to his voice and his style. Lady's voice is very different, and so is her emphasis on events. The change is dramatic, sometimes romantic, occasionally bitter, and often curt. It is a mistake to compare the work to Croaker. Stylistically, Cook has captured a completely different voice and a completely different viewpoint. I think this book is well worth the read.

Published by Thriftbooks.com User , 21 years ago
Take the other reviews of this book with a grain of salt. Yes, it's a bit slower and yes, the narrative is split between more characters, but it's written that way for a reason. 'Shadow Games' and 'Dreams of Steel' taken together are meant to be a transition between the old Company of the "Books of the North" trilogy and the new Company of the "Glittering Stone" trilogy.The Company is scattered and nearly ruined after their defeat at Dejagore, so DUH! of course it's going to take them time to get their act together. (Be glad that they pull it off in just one book.) Everyone is still alive and kicking -- Croaker, Lady, One-Eye, Goblin, Murgen, Mogaba, even a few of the Taken -- but they're all changed for the experience.And that's the whole point: things change -- including the Black Company. If you're expecting the same old same old missions and schemes from the first book, you'll be disappointed. We already know who they are and how they operate, so it's time for them to take on something new.
Copyright © 2020 Thriftbooks.com Terms of Use | Privacy Policy | Do Not Sell My Personal Information | Accessibility Statement
ThriftBooks® and the ThriftBooks® logo are registered trademarks of Thrift Books Global, LLC