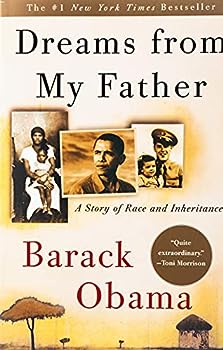 Dreams from My Father: A Story of Race and Inheritance

This description may be from another edition of this product. #1 NEW YORK TIMES BESTSELLER * In this iconic memoir of his early days, Barack Obama "guides us straight to the intersection of the most serious questions of identity, class, and race" ( The...

Published by leslie taylor , 2 months ago
I must say the worst thing that I can say about this book is the length (too long), it should be shorten at least by 100 pages. The book is full of Psychological and Sociological concepts that make it hard to read with such long chapters. . I did like following Barack journey from a small child to a foreign country in Indonesia with no support but his mom. Trying to adjust to such customs and practices could have taken a toll of a child of such an early age with Barack withstood it all and learned many things to help him in life. From his grandparents experience to the absent dad and adolescent growing up and trying to walk a tightrope of righteousness, he survived it all with such grace. He learned that was so much that was amiss about life and his parents but it showed him a purpose to persevere. I think he found a part of his soul and purpose when he moved to Chicago and discovreed a real fulfillment when he found religion. His journey to Kenya was eye opening. I could not keep track of all the relatives and sometimes the stories about his father was hard to discern. I routed for him through each journey and I was happy that he found love and success. He learned to dance to his own music.

Published by Avid reader , 2 years ago
Enjoyed his complete honesty including things most people gloss over when recounting their youth. Was impressed with his candor.

Published by Thriftbooks.com User , 3 years ago
One of the very best books I've read. Yes, the tone in the beginning feels a bit unnatural, but it quickly improves. There are so many good things about this book, so I'm just going to say it's worth it!

Good one no matter who you are!

Published by Thriftbooks.com User , 4 years ago
Even if you're not a fan of his politics, this is a riveting and informative book about his very interesting past! I had to read it for a class but I'm glad I did because it was such a neat book and I feel that I know so much inspiring and real stuff about our past president!

All politics aside, a deep and eloquent book

Published by Thriftbooks.com User , 12 years ago
Now that Obama's election has brought worldwide euphoria and made him the world's most famous man, his memoir is bound to become a lightning rod for cynics and dreamers alike. I suggest reading the book instead as an insight into the man he was becoming a dozen years ago. And whatever he might be today -- overburdened by a world of hope he can't possibly satisfy, and overhyped by our hunger for anyone but our current president -- he has written a remarkable book. Before we even knew his name, he was becoming Barack Obama, a sensitive, troubled searcher with an eloquent gift for crafting a story, collapsing time in narrative, and capturing a scene. I read "Dreams From My Father" hoping to understand our next president. I got far more out of it, coming to understand the duality of race in America, the struggles of sons and fathers, and the interconnectedness of cultures across oceans and centuries. We'll doubtless be saturated in the coming months and years with Obama this Obama that. That makes it all the more essential to read Obama before he became burdened by his own audacious hope. Don't take my word for it, or any other reviewer's, whether they consider Obama a monster or a god. Read about the man in the process of becoming a man.

"Where's the Beef?" Plenty in this Bold Memoir

Published by Thriftbooks.com User , 12 years ago
I remember reading somewhere that conservative columnist George Will believed that this book could quite possibly be the best memoir penned by a politician. Though his assertion is debatable, Mr. Will's alleged statement highlights the quality of this memoir. The writing and depth of introspection in Mr. Obama's book is admirable. It is a journey about racial identity, spiritual awakening, social responsibilty and a search for the meaning of family. My wife and I are both Caucasian and our two, young sons are African-American. Over the decades, I've read a plethora of books/memoirs pertaining to race and, easily, this is one of the books I will recommend for my boys to read. A truly inspirational and gutsy book.

Published by Thriftbooks.com User , 13 years ago
This is NOT the usual self-serving "autobiography" of a politician that was ghost-written by his speechwriter and rushed into print just before the primaries. In this lyrical, beautifully written memoir, a young man struggles to come to terms with his heritage as a child of biracial parents. It is unusually honest, even noting in an afterword where his memory clashes with that of his sister: did he meet her in an airport or a bus station? There is a painful rawness as he speaks of Kansas, which shaped his grandparents, of Hawaii, where his parents met and parted, of Indonesia where his mother remarried, of returning to Hawaii to live with his grandparents and go to school. He touches upon the wounds of youthful rebellion, of pulling back from the brink. He says little of his mother but one can get a sense of the strength and compassion of her character by the fact that she raised her son to admire and see greatness in the character of the man who had abandoned her--who had in fact other wives. He visited only once, when the author was ten. Later, as an adult, the author travels to Kenya, his father's country and meets his sister and his African relatives. He learns that his father was not the man he thought and that although his father had potential, it was never realized. The author returns to America to wrestle with the issue of his brown skin and how some people in America react to that. There is self-discovery on all levels of this reflective book. To write like this a man must grapple with the demons of his own soul and emerge victorious. It's the kind of journey and coming of age that equips a hero to slay monsters, I think. This book is not about politics. If you are interested in Obama's political philosophy, turn to The Audacity of Hope.

Published by Thriftbooks.com User , 13 years ago
...which I read before anyone began to take Obama's chances of being nominated for president seriously. Still, it had the tenor of a campaign biography -- careful, modest, strategic, and yes, evasive at times. The most any campaign biography ever provides is a sense of the subject's priorities; in other words, you won't find many clues to Obama's specific positions on world issues in the account of his childhood. You will, however, get a feeling of the man, and you will discover an American who has far wider experience of other cultures, and far greater optimism about a multi-cultural society, than any other politician on the scene. Those who proclaim that Obama lacks "experience" in foreign policy are dead wrong; one strong foundation for foreign policy is a knowledge of the rest of the world based on first-hand experience. I'm reviewing this book today because I found a story in the morning newspaper, telling how young Obama supporters on the internet are adding his middle name, Hussein, to their tags and even to the real names. Hey, I'm a young supporter at heart! Henceforth, call me Giordano Hussein Bruno! Many months later, post victory: With President Obama getting 65% approval from the American people, and showing every sign of being thoroughly moderate and main-stream by world piolitical and economic norms, I have only one thing to offer the ranters and ravers of the Limblather sort: a huge horse laugh!

A remarkable journey of self-discovery

Published by Thriftbooks.com User , 16 years ago
The next US Senator from the state of Illinois wrote this book nearly a decade ago, before his rapid rise to political power. Before anyone outside of Chicago's South Side knew who he was, Obama wrote a remarkably personal account of his childhood and life up to that time. The subtitle of the book is "A Story of Race and Inheritance," but it seems that the book is really about identity. Obama writes freely on "the puzzle of being a black man," which is compounded for him by the fact that his mother is American-born and his father is from Kenya. He lives in Hawaii, then abroad in Indonesia for part of his childhood, reinforcing the fact that he is from two worlds but belongs to neither. He meets his father only once, around age ten. The author then wends through life up to his late twenties not knowing who his father really was. The point at which he finds out about his father's weaknesses is one of the more explosive moments of the book. Obama shares even this darkest moment with us. Obama writes frankly about his idle years as a teen, his past fondness for pot and for liquor, but these preoccupations fade for him as he finds purpose to his life. He gives up a successful job in New York to work on the streets as an organizer, where he helps mainly poor blacks fight for fair housing and educational opportunities. But in spite of his passion for this work, his life is still incomplete. He writes, "my identity might begin with the fact of my race but it didn't, couldn't, end there." The pinnacle of Obama's young life was finally visiting his African family in Kenya, and although his father has already passed away, he has left behind a large group of people - - Obama's people - - who claim him as one of their own. It is during this trip where he receives his inheritance, which is not his father's practically nonexistent and disputed estate, but the wealth of information about generations past. Shortly after his first African trip, where this account ends, Obama begins Harvard Law School. If it seems incredibly rare to find this level of candor in a political biography or autobiography, it's because the book is an autobiography about a man before he gained political ambition. This is what makes this book stand out so boldly from the genre: That a man could share some of the deepest parts of himself years before he sought high office is rare indeed. The 2004 edition of this book contains a new preface by the author.
Copyright © 2020 Thriftbooks.com Terms of Use | Privacy Policy | Do Not Sell My Personal Information | Accessibility Statement
ThriftBooks® and the ThriftBooks® logo are registered trademarks of Thrift Books Global, LLC