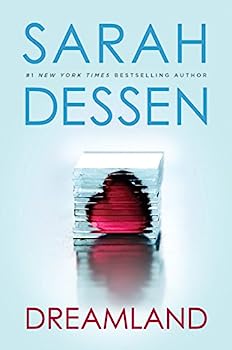 This description may be from another edition of this product. Love can be a very dangerous thing. After her sister left, Caitlin felt lost. Then she met Rogerson. When she's with him, nothing seems real. But what happens when being with Rogerson becomes a larger...

Published by Shalena B. , 1 month ago
This book absolutely wrecked me. As Caitlin fell into her darkest place she brought me back to my own. There were times I had to stop reading because the words were too blurry. I love all of Sarah Dessen’s books and have read all of them. This one though, hits the hardest. By the time Caitlin is a shell of her former self, you’re right there with her feeling everything she is. As she heals it’s like part of you does too. A must read!

Published by Ciera , 1 year ago
I ordered this book in like new and it came exactly like that. It looked like I had just went to the book store to buy it. The book is something many girls should read. Abuse is more common than we would like and this book could hopefully help them understand it’s not okay by reading abt caitlyns journey.

Published by Oregonreader02 , 1 year ago
I can remember reading this book years ago, I'm talking 10 years ago. It was one that I absolutely loved. So much that recently I started to think about it when I was searching for my next book. Only thing was...I couldn't remember the name of it or who even wrote it. This book stuck with me so much that by putting together little things I remembered about it I was able to find the name. As soon as I received it I began reading it. I took it everywhere with me and ended up finishing it in just a couple days. I loved this book just as much as I did the first time I read it. This will be a book that I will place on my shelf and most likely read AGAIN!

The Battle of Abuse

Published by Thriftbooks.com User , 15 years ago
Turning 16 year old Caitlin O'Koren wakes up on her 16th birthday to discover that her sister has run away with her boyfriend Adam. Caitlin isn't as sad as her mother who is sobbing in the kitchen reading Cass's note. Cass is 18 so she is not a minor anymore. She can go to China if she wants but Caitlin finds her gift which is a Dream Journal that her sister ,Cass, left. Caitlin writes in it. Caitlin meets Rogerson for the first time at an "abandoned" Car wash and bumps into him. She is moved and quikly finds herself ditching her stupid cheerleading roll at school and getting into it with Rogerson. She starts to smoke pot (which Rogerson sells and is literally falling in love with him. With all this she finds a love for photography. She also spends so much time with Rogerson her grades drop and her sister missing just becomes a blur as caitlin gets bruised and beaten by him but she sticks through because she loves him. She feels shes invisivle and she can't talk to anyone in fear of "Full Contact". She feels she is sinking into the ocean, drowning. She wants to hit the bottom and become invisible so Rogerson doesn't hit her. When the police find out about all this Rogerson goes to Jail but Caitlin doesn't want anything except him. She screams his name and sobs for him. She wants him but can never have him again. She goes to Evergreen ,a recovery center. She lives there for the rest of the school year and soon her love for Rogerson fades. But everytime she thinks of him a huge hole in her heart is formed and she wants him all over again. I ,personally, LOVED this book. I started crying when they took Rogerson away and I felt as if I was right there with Caitlin screaming his name wanting him to come back. If I could actually meet him, I would love him as Caitlin did. You really get into Caitlin's story and she is happy that she finally has one. Instead of always following her sisters roll being the second-place, also-ran, did-too. She did something her sister never did and is proud, not of being beaten or punched but because she loved Rogerson more than anything in the world at times and (so did I a little).

Through the eyes of the victim

Published by Thriftbooks.com User , 17 years ago
Caitlin O'Koren already must deal with the fact that her sister, Cass, who is supposed to be at Yale soon, has run away. And, for all she and her parents know, Cass may never return. To Caitlin's shock, she is a staff member on the Lamont Whipper show, a fictional Jerry Springer type talk show.Enter Rogerson Biscoe, a dreadlocked hunk who takes Caitlin's mind off of her family's ordeal. He is able to perfectly fill the void Cass left behind. His lifestyle of smoking and partying is wild, something new and exciting to Caitlin. That's why when he pulls her into his world, she doesn't hesitate to come along for the ride. As she gets deeper and deeper into the relationship, she comes to understand Rogerson is bruised and badly broken, both in the literal and figurative sense. He has a father who hits him and to heal his own pain, he begins taking his anger out on Caitlin.Soon, Caitlin changes, switching gears altogether. She used to be a B student, a cheerleader, and a loyal best friend to Rina, who is fiercely loyal in return. Now, she incessantly blows Rina off when she tries to make plans, she's quit cheerleading, she's become withdrawn, she's smoking weed, taking Rogerson's beatings, and plummeting further and further into the abyss. Those who try to reach out, friends, family, and worried peers, have no success. It's as if there is a wall between Caitlin and the rest of the world. Really, there is. That wall is her dreamland.Dessen's best novel to date is realistic and totally believable. When people question why victims choose not to escape their relationship abuse, they don't always understand things can't be so easy. Dessen also demonstrates the driving forces in one's life that can cause a person to lose their grip on reality, as well as their sense of security. DREAMLAND is more than a mere YA novel. It's about a horrid thing that actually happens to thousands of teenage girls today.

Published by Thriftbooks.com User , 20 years ago
I don't understand how anyone could give this book less than five stars. It's a powerful, gut-wrenching story of a girl and her relationship with her abusive boyfriend. After reading the reviews, there won't be much suprise in the events that happen in this novel, but just to learn why she stays with him and even loves him is reason enough to read it.Rogerson, her boyfriend, almost seems like two completely different people by the end of the novel. The sweet, caring boyfriend at the beginning of the book and a monster by the end. When you finish reading the novel, you may even question if you yourself would be strong enough to get out of that kind of relationship.With her knack for describing details so vividly and her amazing character development, Sarah Dessen has become my favorite author. Anyone and everyone should read this book. It's not to be missed.

Published by Thriftbooks.com User , 20 years ago
Several weeks ago I stayed up most of the night to finish reading this haunting story. I've read some good books since then, but Dreamland has stayed with me. It's a strangely gripping mixture of the poetic and the realistic. I couldn't help but believe this is how life is for many teens. For one thing, the author caught the intelligence and frivolity of being a teen so vividly. One moment the narrator is making a breathtaking observation about life, and the next she's ignoring danger signs practically screaming at her. The story somehow maintains a feeling of hope even as it deals with drugs and self-destructive choices. And yes, this did remind me a bit of last year's TV show FREAKS & GEEKS, since the main character is a girl who changes her choice of friends and style of life. However, Freaks and Geeks (pretty good show that is was) didn't pack near the punch of this book. I rank this book five stars because it's an good book and it's one that stays with you. It will probably stay in your mind long after you're finished reading.

The most realistic story about an teenagers life

Published by Thriftbooks.com User , 20 years ago
The book Dreamland by Sarah Desson is an excellent story about a young girl's life and the decisions she is faced with. It all starts on Catlin's 16th birthday, when she wakes up to find a unexpected note on the kitchen counter, that her older sister, Cassandra, has ran away to with her new boyfriend, Adam. Catlin's parents, who were very invovled in Cassandra's life, are devastated by this mishap. Catlin is now going insane, she doesn't even feel like a part of the family anymore. Her friends convince her to join the cheerleading squad, which wasn't easy for her. Next, she finds herself with a new boyfriend, totally opposite from her friends. He is out of school, a big partier and worst of all, a drug dealer. This however does not stop Catlin. Soon, she starts to drift way from her friends and is with him everyday. Her parents start noticing bruises all over Catlin and black eyes appearing out of nowhere. This is one book, you will not be able to put down, it keeps you wanting to know more and more "Is Cassandra going to call home?" or " Is Catlin's boyfriend really the sweet guy she thinks he is?" I would recommend this book to anyone. Especially teenagers, these are real life situations that can happen to an everyday teen.
Copyright © 2020 Thriftbooks.com Terms of Use | Privacy Policy | Do Not Sell My Personal Information | Accessibility Statement
ThriftBooks® and the ThriftBooks® logo are registered trademarks of Thrift Books Global, LLC