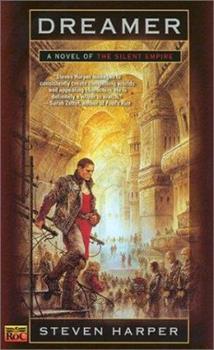 Dreamer: A Novel of the Silent Empire

(Book #1 in the The Silent Empire Series)

The Dream......is a plateau of mental existence where people are able to communicate by the power of their thoughts alone.The Silent...These people -- known as the Silent -- find that the Dream is threatened by a powerful Silent capable of seizing control of other people's bodies against their will...and may be causing tremors within the Dream itself.The Risk...And if the normals learn of this, they will do anything to capture the Silent for use as...

Published by Thriftbooks.com User , 16 years ago
The Dream is a place in the collective subconsciousness of The Empire, an uncountable number of souls strewn across a universe. It is how interplantary governments and corporations communicate. The Silent are a small percentage of beings who can interact with the Dream. They are the messengers in this vast network, the ones who send and receive the information from planet to planet. Some regard them as a commodity, others as gods. Kendi Weaver is one of The Silent. He has been a commodity, and now he wants to rescue other Silent from the same life. The only way to find them is through the Dream, but something is destroying the Dream. Sejal is Silent. He is neither Commodity nor God, but a free citizen, and he wants to stay that way. Fortunately, Nature provided a way for him to keep his talent hidden. Unfortunately, he may be part of the key to what is destroying the Dream. If the Dream dies, so will The Empire. Steven Harper's story will keep your attention riveted on reading the story fromt he first page to the last.

Published by Thriftbooks.com User , 18 years ago
A VERY complex but easy to follow fantacy/mystery.The author is brilliant. His characters well developed and the enviornment well depicted.

best book i ever read

Published by Thriftbooks.com User , 19 years ago
This is an awsome book although at some parts it is a little weird (talks about prostitoution he he) but i really recomend this book anyway. It can be hard to follow if u dont pay attention but overall it kicks [behind].

this story holds your interest

Published by Thriftbooks.com User , 19 years ago
I am only half-way thru this book and it is great. the author has so much to say about racism in my opinion and has put it into a rich storyline. The characters are real and believable at every turn in the plot and the discription of all the parts of the story..people,places,things are all so detailed that i can picture all so clearly..very nice. I myself see "the dream" as sort of a metaphor for the "internet" and the disturbances on the dream as scary images like the ones i've seen on some PC video games! I apreciate that the people often have good sides and bad sides depending on the complex level of them mananging their fear which makes the story espically vivid. The book has a great mix of male and female players as well as different sexualities and racial types that would make this a great book for science fiction readers as well as young adult readers in general,I understand this will be followed by another and I am looking forward to it already as I finish this book. I am interested very much in this world Rust and its political and social story because of its complexities

A fascinating and complex tale of Science Fiction

Published by Thriftbooks.com User , 20 years ago
It is so rare that a book just grabs me and refuses to let go. I started "DREAMER" yesterday, and could not sleep until I finished it at 3 am! Steven Harper certainly knows how to tell an engaging tale and keep the reader's interest from start to finish. Harper has created a new science fiction universe which shows incredible imagination and skill in world builing. His 'Silent Empire' is superb, both in it's concept and execution--a universe where Dreamers of numerous species communicate on a plane of existence entered by their thoughts. They can 'possess' the bodies of Silent slaves thousands of light years away, and are crucial in the running of the various galactic empires.The plot revolves around two major points: a Silent being of great strength that has been recently sensed within the Dream, one who can possess the non-Silent as well; and there is also a great change taking place in the Dream, where the Silent are losing control, and a great storm of change is coming.Told with great care and filled with fascinating characters, this is one of the best books I have read in a very long time.
Copyright © 2020 Thriftbooks.com Terms of Use | Privacy Policy | Do Not Sell My Personal Information | Accessibility Statement
ThriftBooks® and the ThriftBooks® logo are registered trademarks of Thrift Books Global, LLC