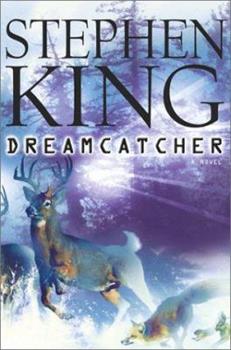 Once upon a time, in the haunted city of Derry (site of the classicsItandInsomnia),four boys stood together and did a brave thing. Certainly a good thing, perhaps even a great thing. Something that changed them in ways they could never begin to understand.Twenty-five years later, the boys are now men with separate lives and separate troubles. But the ties endure. Each hunting season the foursome reunite in the woods of Maine. This year, a stranger...

Published by Ashley , 3 months ago
Book came in great shape love this app so much

Published by Denice , 11 months ago
I bought a “very good” hard cover copy. It came without a book jacket and the cover is pretty beat up. The pages are fine and readable but bummed about the condition of the cover.

Published by MLW33 , 2 years ago
Book was ordered under “good” condition. The pages are bent so bad the book won’t shut. The cover is the same way, it won’t even stay on the book. The book is not readable. When closed the book is so filthy. Just a disappointment all around.

stephen you write have alot of wonderful characters

Published by Thriftbooks.com User , 14 years ago
and this book has alot.Not to mention a good story.Mr King makes you feel for these characters.Very suspencful

Published by Thriftbooks.com User , 18 years ago
I am a BIG SK fan, I've been reading his books since high-school and I have really praised him when they were great (The Stand, IT) and I've really panned him when they were downright dumb and ununderstandable ( The Tommyknockers). Lately I have had my doubts about my good friend but this book does bring him back to the King of old, and that makes me very happy. The characters are great, the story is fun and exciting and as always with SK the monsters are of the alien AND human kind. I didn't give it 5 stars basically because I know he has done better than this, but this is a good start to going back to vintage King.

A treat for an old fan of Stephen King

Published by Thriftbooks.com User , 21 years ago
I grew up on "The Stand", "Cujo" and "Salem's Lot", but it's probably been well over a decade since I read a book by Stephen King. How great it was to reconnect with this old friend! King is so prolific and so populist that his work is easily dismissed by serious critics, and that's a shame. "Dreamcatcher" is a perfect example of his brilliance at work. The central concept - bodysnatching aliens - is an old one, but King gives it new life. As always, his plot is imaginative, compelling, and just the right amount of horrifying. His core characters are similar to the "everyman" lead in most of his novels, but more layered and finely nuanced. There are characters within characters, literally and figuratively. The story is beautifully paced, and King masterfully weaves the different plotlines together - much like a dreamcatcher. Even things that would normally turn me off a book are surprisingly well done. While I generally consider scatological stories juvenille and a [poor] attempt to shock, it actually makes reasonable scientific sense in the context of this plot, unpleasant as it is. An interesting little side note - the action in this book takes place in the November after the 2000 election, i.e. November 2001. At the time King wrote the book, the presidency was still undecided. As part of the story, the new president must speak to the nation and soothe everyone's fears about the threat presented by the alien invaders. The speech leans heavily on the patriotic and is considered to be the new president's finest hour and erases the scandal of the election. Eerie.

Another step in the right direction

Published by Thriftbooks.com User , 21 years ago
A pattern emerges when you begin to read reviews of King's work, and if the pattern bothers me, it must really annoy King himself. Of course it's a pattern that we in America apply to everything, not just to the master of horror. We use it to judge novelists, films, television, even our food. Is it the same? we ask. The same as everything else?Many writers, including some of my favorites (Robert B. Parker, Lawrence Block, John Sandford, among others) are content to establish a formula and stick with it, giving each of their books a comfortable sameness. King hasn't done this. Ever.If you go back about a dozen years or so, you'll see a very clear dividing line, a book called IT. That book changed King from a very good Horror writer into a very good WRITER, who happens to specialize in horror. Since then, each of his novels have represented an evolutionary leap forward in one manner or another.Dreamcatcher is no exception. A richly detailed look at friendships and how they change over the years and about the moments in life that can tie people together forever. When these friends refer to the one noble thing they've done in life, it's not with a back patting nod and an "ain't we great" smile. It's wistful and sad, that only once did they ever reach up out of themselves and do something noble. The events of the book give them one more chance to be noble.Dreamcatcher is a book about redemption, and it represents another fine step forward in the literary evolution of our finest writer.

Published by Thriftbooks.com User , 21 years ago
Dreamcatcher may be one of the most well written novels Stephen King has ever published. From a literary standpoint, it cannot be easily topped as a modern telling of horrors both internal and external. I've been reading him for years and can think of no other novel so perfect and stylish syntactically. He mentions that he wrote the first draft longhand and maybe that's the difference. Whatever the reason, Dreamcatcher stands as a shining example of his adept knowledge of prose.Most people compare all Stephen King books to one of two of his previous works. They either set the plumb line at The Stand or It. There are a few fringe non-conformists who choose The Shining or Salem's Lot or (in my case) Christine. For many, his books are either better or worse than those two. I try not to do that; though, as I admitted parenthetically, no one is perfect. For those who do, I'll say that this book is no better than any I've mentioned. That's not to say it's bad. It isn't. It's fantastic - sort of an R or NC-17 rated (depending on the MPAA's stand on flatulence) X-Files. The premise is intriguing and well thought out - though there are a few wholes in the "why didn't they just do this" category. The thematic threads and persistent patterns weave brilliantly through the novel to create a beautiful, if not slightly bloated tome that any author could be proud of. Can Stephen King? I think so. Considering he wrote the lion's share of it after his accident, he ought to be damn proud. It's a fantastic story and I'm glad he told it. It's not a story that had to be told and I don't know how important it is to the benefit of man, but it made me happy to read it. And isn't happiness - from the instant-gratifying smoker to the planning financier - what it's all about?I'm not going to give any plot away, but I will say this book needs to be finished once it's begun. I don't know if I've ever read a more subtle twist ending than when I read the final pages of Dreamcatcher. Sort of like sailing to England and washing ashore on Mars. Truly left field, I promise.Is it King's best work? No. I prefer to think that his best work is yet to come.
Trustpilot
Copyright © 2022 Thriftbooks.com Terms of Use | Privacy Policy | Do Not Sell or Share My Personal Information | Accessibility Statement
ThriftBooks® and the ThriftBooks® logo are registered trademarks of Thrift Books Global, LLC