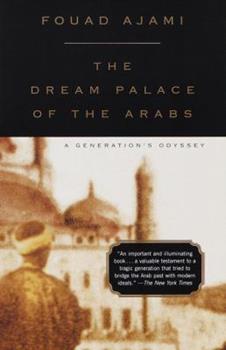 The Dream Palace of the Arabs: A Generation's Odyssey

From Fouad Ajami, an acclaimed author and chronicler of Arab politics, comes a compelling account of how a generation of Arab intellectuals tried to introduce cultural renewals in their homelands through the forces of modernity and secularism. Ultimately, they came to face disappointment, exile, and, on occasion, death. Brilliantly weaving together the strands of a tumultuous century in Arab political thought, history, and poetry, Ajami takes us from...

Published by Thriftbooks.com User , 16 years ago
This book is an absorbing blend of history and literary criticism. A somewhat melancholy narrative of the political and economic failure of the Arab World in the 20th century, it is also a study of Arab intellectual currents of the time. The author chronicles the lives and the thoughts of these intellectuals from the heyday of modernity in the middle of the century through pan-Arabism, secular nationalism and Nasserism. The great dream of an Arab Awakening failed miserably. The total defeat of 1967 was a turning point in the move towards religious fundamentalism whilst the increased oil revenue after 1973 only exacerbated the fragmentation of the Arab World into brutal fascist regimes, medieval theocracies and oiligarchies. There were and are exceptions to the majority of intellectuals who were united mainly in their hatred of Israel, like the Egyptian novelist Naguib Mahfouz, the Palestinian academic Sari Nusseibeh and a few others. According to Ajami's insightful analyses, repeated failure led to extremism and further disasters and thus the cycle of hopelessness continued. This book was published in 1998 so it preceded the expressions of more murderous nihilism as seen in 9/11, the further intifada against Israel and the genocide in Darfur. The embrace of religious fundamentalism has been facilitated by the nihilistic utopianism of writers like Edward Said and others. One of the results of this regrettable trend has been the more severe oppression of minorities like the Christian Copts in Egypt. The book is illuminating on many levels: the Shia/Sunni divide, The Iranian revolution and Arab perceptions of it, The Oslo accords, Iraq's war against Iran and Kuwait, the assassination of Sadat and the attitudes of the Arab intelligentsia towards Israel. Dream Palace Of The Arabs is a most enlightening read for those who wish to understand the tragic history of the Middle East. The work is scholarly and well researched, but the writing has a riveting and poetic quality that keeps the reader captivated throughout.

Obituary for a modernizing generation

Published by Thriftbooks.com User , 18 years ago
The extremism that seems to pervade the Middle East is neither the region's predestined endpoint nor is it a historical inevitability-rather, it is a condition that sprung out from the failure of a great generation of reformers and free-thinkers that lived in the middle of the twentieth century, and whose passing away by the 1990s marked the triumph of theocracy and backwardness in the Middle East. "The Dream Palace of the Arabs" is the sequel to the "Arab Predicament," which Fouad Ajami, a Lebanese professor at Johns Hopkins, published in 1980; back then, Mr. Ajami was younger and "approached [his] material more eager to judge." In the "Arab Predicament," he bemoaned the Arab political experience; in "The Dream Place of the Arabs" he tries to "appreciate what had gone into the edifice that Arabs had built." This literary journey chronicles the birth of a generation of modernizing Arabs that fought and lost the case for modernity. The history of the past seventy years is narrated through the life of authors and their works-what they wrote, how the societies around them reacted, and how the political condition merged with their literary expression, only to suppress it and silence it. As a parallel history, "The Dream Palace of the Arabs" could accompany any book. But in looking at the literary interplay between modernizing authors and their surroundings, Mr. Ajami has not only dug deeper in his probe of what brought about the present Arab political condition, but has analyzed the issue on a whole other level. The reader who is familiar with Middle Eastern history will not feel burdened by the material. The refreshing tone and approach allows Mr. Ajami to deal with such issues as the Iranian revolution, the Egyptian peace with Israel, the Palestinian battle with Israel, or the Iran-Iraq with refreshing erudition and acumen that always excites and never bores. "The Dream Palace of the Arabs" cannot serve as an introduction to the Middle East; it is too subtle and perceptive for that; but for anyone who is tired of reading about oil politics, religious fundamentalism and elusive peace deals, and who is actually interested in the underlying intellectual currents upon which the Arab political storm thrives, "The Dream Palace of the Arabs" is a sure bet.

Published by Thriftbooks.com User , 19 years ago
Because he lacks the flash and skill at sound bites of some of his more well known colleagues and does not crave to spend time on CNN, Professor Ajami?s work is frequently overlooked. That is a great loss for everyone trying to understand the Arab world, particularly in these times of growing tension and violence. Ajami asks a profound and much debated question, why did modernity seem to pass the Arab world by? ?Scholars,? such as Edward Said, argue that everything is the fault of the West and imperialism and that nothing intrinsic in Middle Eastern and Islamic culture deserve the blame. In contrast, Ajami takes seriously the fact that prior to the enlightenment, Islamic society was both intellectually and materially superior to West. Indeed, after World War II, with a fair number of Western educated citizens and a burgeoning middle class, many observers say the Middle East having a bright future, likely brighter in fact, than those currently economic and political successes, South Korea, Tiwan, and the other ?asian tigers.? What then, went wrong? Ajami points to Arab society never internalizing the nation state and that democratic values never gained currency beyond a small clique of intellectuals. Instead, such modern political ideas were seen as imperialist impositions, given little more than lip service.I disagree with Ajami on several points, most notably his rosy predictions for Egypt. Still, the work is well worth a serious read for any student of the Middle East.

A fresh look at the Dream Palace of the Arabs

Published by Thriftbooks.com User , 20 years ago
This well-written book, first published in 1998, deserves a fresh reading. The book provides a good perspective and some answers for many of the questions that came up in the aftermath of the September 11, 2001 terrorists attack. The author dedicated his book to Tahseen Basheer, the Egyptian diplomat. Perhaps a brief answer to many of these questions is given by Mr. Basheer 's comment, that " Political Islam had been checked (in Egypt) in its bid for power, but the Islamization of society has gained ground ". The book reviewed the cultural history of the Middle East and its (political) Islamization in the late 20th century. It reviewed the societal change from progressive secular nationalism and modernity to theocracy and Islamic militancy marked with antiwestern tendencies.The book starts with the literary scene in Beirut, Lebanon in 1960's through the 1980's, where many Arabic writers, poets, and intellectuals found a haven from dictatorial rule back home and restrictions on the freedom of expression. As the Lebanese civil war took its toll, freedom seekers who settled in Beirut, had to find other havens in Paris, London, Canada, and the US. The conflict in the Middle East and the theocratic Khomeinie revolution contributed to the exasperation of communal conflicts in Lebanon. The new found oil wealth in the Arab oil producing states after 1973 and recession of the mid 1980's influenced or possibly accelerated the change of many of the once progressive Middle Eastern societies into regressive societies.The writer indicated that Egypt has always held an endless fascination for him. He attempted to present some of the subtlety and some of the pain of its uneven encounter with modernity. Egypt had an early start in modernization in the 19th and early 20th centuries, much earlier than other Arabic countries. Egypt provided a beacon of civilization, culture and inspiration for the rest of the Arabic world. The author recounted his childhood memories, and how his aunts shed the old veils, put on western attire and high heels, and enjoyed Egyptian literature. He reviewed the changes of the 1970's under President Sadat of Egypt. After a failed attempt to assassinate President Nasser of Egypt, he banned the Muslim Brothers organization, and jailed many of its members. Sadat freed them from prison and assisted their organization in an attempt to counter the socialist organizations of his predecessor Nasser. Preachers and religious activists drawn from the Muslim brothers were given access to the airwaves and print media and became icons of popular culture in Egypt. They, however, dabbled in incendiary material, advocated an Islamic state, and hounded the indigenous Christians of Egypt, the Copts. They made no secret of their view that the best the Copts would hope for was a diminished and subordinate status. The incendiary militant Islamic propaganda against the Copts was followed by violent attacks.To this the Egyptian state turned a blind eye. The Copt

Published by Thriftbooks.com User , 23 years ago
If for nothing else, Fouad's essay on "The Orphaned Peace" is worth the price of admission. His insight is peerless, his prose lyrical (his editor did a wonderful job preserving his unique style and language), and his thoughts are, as always, challenging. As one can see from other reader reviews, it takes an uncommon intellectual courage for him to look with such unblinking eyes at the world he grew up in. It is a sad story, told in a unique idiom. A must-read for anyone, Arab or Jew, interested in the region.
Trustpilot
Copyright © 2022 Thriftbooks.com Terms of Use | Privacy Policy | Do Not Sell or Share My Personal Information | Accessibility Statement
ThriftBooks® and the ThriftBooks® logo are registered trademarks of Thrift Books Global, LLC