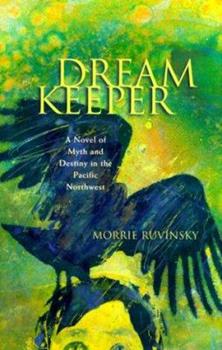 Dream Keeper: A Novel of Myth and Destiny in the Pacific Northwest

This description may be from another edition of this product. Set in both the past and the present, Dream Keeper invokes the spirits of the First Peoples, weaving the legacy of the pioneers and the trials of love and family into a wildly imaginative and...

Dream Keeper is a beautiful read!

Published by Thriftbooks.com User , 21 years ago
Dream Keeper is a mythic tale drawn from a blend of Northwestern Native American influences and western European and Canadian traditions. Predominant in the mix is the rich Kwakiutl Native American traditions, from which come the three Sisters of Destiny, Hanging Hair, the Thunderbird, Sedna, the Orca Whale, and Adee the Silver White-haired. One of the Sisters helps create an aberrant immortal soul by "breathing life into him." This compounds a dilemma for the Sisters, for Jason Ondine,(originally a white boy accompanying his explorer father in the 1800's to the Northwest Territory) the immortal, may grow to become something greater than even they and terrible chaos may come to the world as a result. After much haranguing,mirrored as storms in the natural world, the Sisters decide to allow Jason a great role of bearer of tradition, justice, and retribution by escape into the sea. It is unclear just how certain it is that Jason's immortality, which can be sacrificed only for his unborn son, will somehow address the imbalance of justice, reflected in the culture clash between the Kwakiutl and other Native Americans and the white settler horde. But what is beautifully established in a complex system of alternating time shifted double narrative is the idea that in the sea, for 200 years as a lordly immortal sea lion is the only safe preserve for the rich ancient stream of Kwakiutl and other Native American traditions, customs, and prehistory. There are many lyrical passages in Dream Keeper, and much of the narrative has the drifting clarity of dreamvision. One of the best passages is when Jason goes to the museum to find the bones of Dzarilaw, his Kwakiutl foster father, to rebury them in their rightful resting place. He finds the marker for Dzarilaw's grave. Jason approached the wooden statue full of awe and trepidation. He seemed almost afraid of it, and curiously drawn by some tenacious grip reaching into his soul and dragging him closer. Lizzie watched him moving forward and thought he was moving like a boy. Tentative and uncertain, both cocky and confused. He circled the pedestal, sometimes looking at the carving, sometimes looking away. Jason circled twice. He felt his heart racing and he was as disturbed and lonely as he had ever been in those days in the village. He felt the spirit of Dzarilaw trying to comfort him. It frightened him. Girding all his considerable courage - and it felt to him like this was his defining moment, that it was the bravest thing he had ever done - he walked up to the big wooden grave marker and put both his hands on it. Near the heart. "My son," Dzarilaw said, "at last you have come for me." Jason was stunned. "You make an old man's heart soar," he continued. Jason's mind raced to keep up with itself and could not. He looked around to see if anyone else had heard Dzarilaw speak. No one had and he was relieved. He caught his breath. He felt

Published by Thriftbooks.com User , 21 years ago
This book was a great read. It starts with myths of the native peoples of the Pacific Northwest, and continues onto well-plotted adventure story. The destiny of Jason Ondine, the hero of the story, seems both beautiful and tragic. Ruvinsky's language is carefully thought out and evokes setting and characterization. The fast pace of the book made me want to keep reading to find out what was going to happen.

Who knew it could be done?

Published by Thriftbooks.com User , 21 years ago
I read this in two sittings and couldn't wait to get back to it whenever I had to deal with something tearing me away (like eating). Somehow Ruvinsky has managed to weave together a mythological parable with a contemporary story of love and suspense. It's so hard to recommend books to friends, given everyone's idiosyncrasies, but I can't imagine anyone who wouldn't like this.

This is a great book.

Published by Thriftbooks.com User , 21 years ago
I really enjoyed reading it. I would recommend it to anyone

Published by Thriftbooks.com User , 21 years ago
A wonderfully imaginative novel incorporating an acute insight into the value of myth and mystery in our historical and cultural lives. Ruvinsky has well trained story telling skills from his life as a screenwriter, and for those so inclined, a sweet sense of the romantic. Who knows where this stuff comes from, but it is very unique and swell read.
Copyright © 2020 Thriftbooks.com Terms of Use | Privacy Policy | Do Not Sell My Personal Information | Accessibility Statement
ThriftBooks® and the ThriftBooks® logo are registered trademarks of Thrift Books Global, LLC