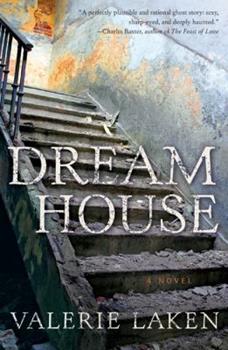 -The perfect haunted house story for these unnerving times.- -- New York Times Dream House , the riveting debut novel from Pushcart Prize-winning author Valerie Laken, tells the story of one troubled house--the site of a domestic drama that will forever change the lives of two families. Embracing volatile issues such as race, class, and gentrification, while seamlessly mixing genres as diverse as crime fiction, suspense, and home renovation, Dream...

Published by Thriftbooks.com User , 13 years ago
I thoroughly enjoyed reading this book. It starts off like a black culture vs. white culture story but turns into an account of how a moment of misguided passion destroyed lives and sent a man, Walker, to prison, When he gets out, he goes back to the house that "should have been his" and finds that a white woman has completely gutted it, leaving nothing of his family behind. The woman, Kate, has problems of her own. Her husband has left her high and dry to do the hard work of renovating her new house. She struggles with her relationship to her family and everyone else in her life. The author brings in other interesting characters like the white ex-minister who has given Walker a place to stay and Jay, the man who cleaned up the crime scene many years ago and now has ties to Kate because she has his dog. Alot of plot lines with a bitter-sweet ending.

Published by Thriftbooks.com User , 13 years ago
I thoroughly enjoyed this plot and the characters she developed. Being that this is her first novel, I look forward to more books by Valerie Laken because I believe she'll take more chances next time. She is a great writer and has the potential to turn out some fantastic stories. The description of "ghost story" on the book will throw people off if they're looking for a book about actual ghosts or hauntings; it's more of a metaphorical description. I couldn't put it down.

Much more than a ghost story

Published by Thriftbooks.com User , 13 years ago
If you're looking for a cheap, mindless thriller, look elsewhere...Dream House is a literary work that explores the dynamics of marriage, family life, and the walls we put up between one another. The most intriguing thing about this book is Laken's ability to balance the traumas of a handful of characters while maintaining a gripping plotline. I was grateful that she neither forfeited plot for character nor vice versa. Overall, a really great read and compelling story.

"Whatever the world could do to her now, she could take it"

Published by Thriftbooks.com User , 13 years ago
Although this novel starts out with the aftermath of a brutal murder in a ramshackle house in a quiet street of a suburb near Ann Arbor, much of the focus soon turns to newly married twenty something Kate and Stuart who, seven years out of college and nearly twenty years later, purchase the house with the best of intentions, hoping that it will somehow help rejuvenate the insecure threads of their marriage. Although Kate and Stuart are aware that some kind of scandal once rocked the house, Kate, in particular proves to ever-more industrious, having a weak spot for improvement projects as she fanatically sets about demolishing walls and pulling up floors, renovating and remodeling from the bottom up. While Kate's authoritarian father, a lucrative housing developer, encourages Kate and Stewart to have a home of their own, even he can't believe that the couple would purchase this particular house. Yet Kate, who believes in the power and the responsibility of humans to fix what is wrong with the world, is fanatical in her desire to remake the two story clapboard box, doing things with an eerily magical speed and efficiency: "it was as if she and the house had developed their own code." Amidst the plaster and the lath, the drywall and the stripper, the place explodes, throwing both Kate and Stuart in different directions. Stuart remains haunted by his childhood and his life with his autistic brother Danny, while Kate battles her family, and the pressures of the upcoming wedding with her far more successful sister. Suffering a meltdown, fired from his job and fed up with Kate's plans for change, Stuart rejects "the queasy fun-house slipperiness to it all," vanishing into the country. Only Kate is left to shoulder the burdens of their dream house. As Kate and Stuart's predicament unfolds, Laken's effortless novel moves to that of Walker Price who cannot let go of the house that has become much more than cement stone, wood and insulation. Walker was only eighteen when he has walked into the corner ice-cream shop with the gun, put it down in the counter. Released from prison after eighteen years hard time, Walker now takes charity from a kindly Reverend Howard, only eight blocks away from Macon street, so close to his home, where he remains preoccupied by the events of that night, and the rapid violence unleashed involving his broken-down mother and the man that was physically abusing her. Walker has never said sorry for the terrible events that rocked their lives and the memories of his dead brother Jerome who was there that fateful night. As Kate and Walker form an unlikely duo, eventually accompanied by Jay, another pivotal character who also remembers that terrible time when he was employed as a type of industrial cleaner, and his girlfriend Claire who had a morbid fascination with the crime scene. After Claire vanished, Jay still keeps the two black-and white pictures, eerie and artful of his crazed face, and his own blurry hand bearing down on

Published by Thriftbooks.com User , 13 years ago
I was at the store to get other books and just picked this up on a whim. To be honest, I purchased this book only because it is based in Ann Arbor - which is where I live. However, I found that it is the type of book that has kept me up because I keep wanting to see what happens next. It is also the type of book that causes one to pause and reflect on which aspects in the characters are a part of the reader as well. As far as style, I really like the way the author weaves together story lines of several different people using both flashbacks and current writing. Over the arc of the story the various details build into a tightly woven piece. That component reminds me of a John Irvine or Pat Conroy book. However, the writing is faster paced. I think this book will appeal to a wide range of people. Ironically, my biggest complaint is that I think she may have gone a little overboard with bringing up Ann Arbor details. It helps for a local, but I think repeated references to certain streets or "the diag" might a get a little distracting if I were not local. Then again, maybe I only notice it because I am local. In any case, I look forward to reading future books from the author.
Trustpilot
Copyright © 2022 Thriftbooks.com Terms of Use | Privacy Policy | Do Not Sell My Personal Information | Cookie Preferences | Accessibility Statement
ThriftBooks® and the ThriftBooks® logo are registered trademarks of Thrift Books Global, LLC