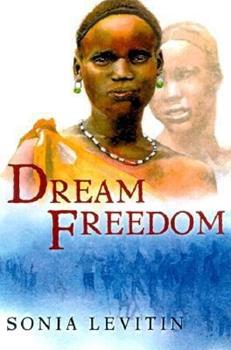 Slavery still exists in some parts of the world, even in the year 2000. In Sudan, tens of thousands of men, women, and children of the Dinka and Nuba tribes are regularly captured, taken from their homes and families, and forced into hard labor. Based on a true story and real-life contemporary events, this novel tells how a group of students in Denver, Colorado, learns of the atrocities in Sudan, and how they begin to make a difference--raising money...

This is a great book.

Published by Thriftbooks.com User , 17 years ago
DREAM FREEDOM is a story inspired by actual events. It focuses on the very serious issue of human slavery, which, believe it or not, exists in modern-day Africa. The book offers viewpoints from both sides, weaving back and forth between stories of enslaved Dinkas in the Sudan and the reactions of American children who learn of the Africans' plight and are determined to help them. The book begins with Marcus, who is upset by the newspaper article that Miss Hazel, his teacher, shows to the class. It's about an African girl, 13, who had been a slave for 7 years until someone purchased her freedom. Marcus doesn't like to think about the starvation and torture the girl endured. She's not much older than he is. It's hard to look at the picture of the rag wrapped around her body instead of clothes. He wonders if the newspaper article is even true. But Miss Hazel and the class begin investigating, and they decide to do something to help. In their research, the students discover that these African slaves can be redeemed for $50 apiece --- the price of two goats --- and Miss Hazel's class soon thinks up ways to raise money to free as many slaves as they can. They write letters to celebrities asking for help. Marcus even writes to a congressman. Intermixed with the efforts of the American children to help are the stories of Dinka slaves. Kidnapped or captured during raids on their villages, these people have no hope of being free again unless they can escape or be redeemed with money. Rumor says that there is a man who tries to help. He searches for slaves and buys them back. He sets them free and reunites them with their families. Is this rumor true? If this man really does these things, why? Can he be trusted? DREAM FREEDOM exposes some of the terrible atrocities being done to people in Sudan. It's based on the real-life teacher and her students who tried to make a difference. They even testified before the Senate Foreign Relations Committee and submitted DREAM FREEDOM into the Congressional Record. This is a great book about how everyday people --- even children --- can become active for a noble cause and truly make a difference. --- Reviewed by Tamara Penny

Published by Thriftbooks.com User , 19 years ago
I really liked this book and I would reccomend it to people who like realilistic fiction. This book was about how there is still slavery in Sudan, Africa. It is also about this class in America who raises enough money to buy back some of the slaves. It has a lot of different narrarators, such as the slaves, Marcus, one of the students, the guy who buys back the slaves, and familys who have been ruined because people took away their family. This book by Sonja Leviton was the best book I have read in along time. It is so touching and it makes you notice about other people's struggles.-H.H

DREAM FREEDOM SHOULD WAKE US ALL UP

Published by Thriftbooks.com User , 21 years ago
DREAM FREEDOM is a wonderful book - devasting, yet inspiring. It tells of the slavery and genocide taking place in Africa's largest country, Sudan, and of the response of a class of elementary school children in America. The class, like teacher Barb Vogel's amazing students in Colorado, on which they are patterned, consider it their moral responsibility to fight Sudan's slavery and tell the world about it. The realistic portrayal of American life is contrasted with the realistic portrayal of life in Sudan. Each chapter brings another perspective, another insight, that makes the tragedy in Sudan more real and personal. In one such chapter the sudden, shocking slave raid on a Dinka village in the midst of a joyous rite of passage celebration is devastating, and will, hopefully, turn the reader into an abolitionist, too.
Copyright © 2020 Thriftbooks.com Terms of Use | Privacy Policy | Do Not Sell My Personal Information | Accessibility Statement
ThriftBooks® and the ThriftBooks® logo are registered trademarks of Thrift Books Global, LLC