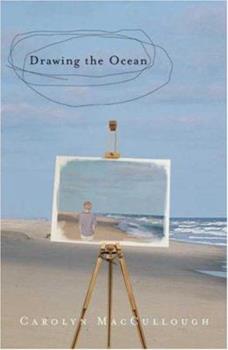 A gifted painter, Sadie comes from California to Connecticut determined to fit in at her new school. Yet her first attempt at making friends in the new town backfires when she reaches out to the loner everyone calls Fryin' Ryan, the very last person who can help her achieve her dream. And to further complicate matters, her twin brother, Ollie, keeps appearing to her, seeming to want something. Her twin brother, who died when they were twelve.

Published by Thriftbooks.com User , 14 years ago
Drawing the Ocean is Carolyn MacCullough's third novel. Like her others it is geared toward a teen audience. But, like most of the books I review here, I can argue confidently that the writing has enough depth to entertain even snobs who refuse to pick up a YA or Children's novel under any circumstances.On to the actual review: After moving to a new town with her parents, Sadie is desperate to fit in. Even if certain aspects of her personality seem determined to keep Sadie from calling herself normal with any degree of honesty. Sixteen-year-old Sadie is a gifted painter. She spends part of every day at the beach, trying to draw the ocean for her twin brother, Ollie. Sometimes Ollie will pop up to keep her company and offer advice. The problem: Ollie died four years ago. Soon enough, Sadie makes friends Lila, a girl with her own problems to deal with. She also catches the eye of Travis Hartshorn, the popular boy everyone loves. But, in midst of all this, Sadie continually finds herself reaching out to a loner known to the rest of the school as Fryin' Ryan, begging the question is being normal more important than being a friend? At its core, Drawing the Ocean is a story about choices. About how certain choices can change everything in an instant. And how the right choice isn't always the easy one. MacCullough writes about all of these dilemmas masterfully. In addition, she also tackles the issue of dealing with a death in the family. As the story progresses, she shows how Sadie and her family are trying to move on. This becomes an underlying theme throughout the rest of the novel. MacCullough manages to creates a compelling story without making it melodramatic. In fact, the prose is surprisingly understated. The writing style is what I'd usually call a quiet book; the kind that would be read in a hushed voice instead of a booming one. The novel is also written in the present tense, which gives the narrative a unique quality (even though more and more authors are adopting this stylistic device lately). More important than the actual plot, though, are the characters that MacCullough has created here. This novel is sparsely populated so that each character matters and is able to become unique. In addition to the storyline, this is a novel that takes a close look at character interactions. She evokes the high school experience in a way that is subtle enough to resonate with everyone. The characters that MacCullough has created are real, there's no other way to say it. They're not the caricatures or cartoon-like characters that are common in comedic novels. They're not flat. These character are simply authentic, real. That is partly due to MacCullough's writing style. She focuses on the essential details, the little things people notice themselves in the real world, instead of trying to describe everything. In this way, the novel comes to life not necessarily as it would be in real life, but as a reader would see it in real life. (No review of th

Published by Thriftbooks.com User , 14 years ago
I really enjoyed reading this wonderful book. DRAWING THE OCEAN is the story of Sadie, a high school student, whose family moves from California to the East Coast. Sadie is an artist who loves to draw the ocean, hence the title of the book. It is almost a spiritual thing for her. She is very nervous about starting a new high school. You know, she is worried about being behind in her studies and having last month's hair. She should be nervous, though, because she keeps seeing and conversing with a ghost. It is the ghost of her twin brother who had been killed four years earlier in a car accident. Sadie blames herself, and the subject of her brother is a forbidden one in her family. She meets a strange young man while drawing on the beach and later finds out that he is the outcast at the high school with the name "Frying Ryan." She also draws the eye of the hot football star, Travis. Soon Sadie has a choice to make about who she wants to be. She can recreate herself, but does she want to be cool or kind? This is a short story with a lot of emotional punch. I strongly recommend this book! Reviewed by: Marta Morrison

A haunting story on many fronts emerges.

Published by Thriftbooks.com User , 15 years ago
Carolyn MacCullough's DRAWING THE OCEAN tells of Sadie, a gifted young painter trying to fit in at a new school, but who instead catches the eye of the school loner - as well as the school dreamboat. Which can help her achieve her dreams - and why does her dead twin brother keep appearing in her life? A haunting story on many fronts emerges.
Copyright © 2022 Thriftbooks.com Terms of Use | Privacy Policy | Do Not Sell My Personal Information | Accessibility Statement
ThriftBooks® and the ThriftBooks® logo are registered trademarks of Thrift Books Global, LLC