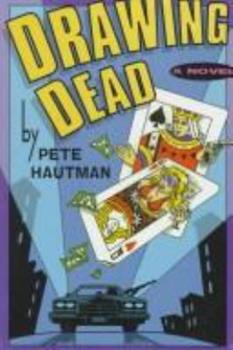 This description may be from another edition of this product. Joe Crow thinks he's one hell of a poker player. An ex-cop who dresses halfway between a slob and a nerd and looks a little like Wayne Newton when he's surprised, Crow has almost forgotten what it...

Published by Thriftbooks.com User , 20 years ago
Enter Joe Crow, an ex-cop in Minneapolis -- all he wants to do is cover is living expenses with his poker winnings. Sounds fairly simple until he gets involved with Dickie Wicky (a sleazy stockbroker who lives on booze and drugs), Catfish Wicky (his over-sexed wife from somewhere and/or everywhere), Joey Cadillac (a questionable Chicago car dealer and underworld don wannabee), Freddie Wisnesky (Joey C's hitman and I do mean hit) and Tomas Campo (a.k.a. Thomas Jefferson and Tom Aquinas, a comic book con man on the run who will probably tell you that he really wrote this book). And this is just the start of the wild and wacky cast of characters and the multiple plots and subplots thatJoe runs into in this very funny novel.If you love playing poker, reading comic books or just taking part in a who's conning who con game this is the book for you! This book was my first expirence with Pete Hautman's writing, and now I've had to go out and buy the rest of his books. Once you read it, you'll probably have to do the same!

A great cast of characters - but not a kid's book!

Published by Thriftbooks.com User , 20 years ago
If you've run out of South Florida hijinks, try Pete Hautman's nutty northern neighbors. "Drawing Dead" is a sequel to "Short Money," even though it was written EARLIER, so try "Short Money" first to make the most of the plotline.Joe Crow stars as a down-on-his-luck policeman with more than his share of losers in his life. How he comes to grips with his own character flaws and manages to do some good in the process makes for fast, funny reading. Hautman has a way of keep things just preposterous enough to make them amusing, but still close enough to reality to make them believable (for an example of the opposite, try "Florida Roadkill.")Pete Hautman deserves to be more well-known. His work is far superior to some of the Hiaasen wannabes currently on the market. Since he also writes young adult fiction, be forewarned that "Drawing Dead" is not one of them. The language and sexual situations are better suited to mature readers. If you're in that category, give him a shot!

Published by Thriftbooks.com User , 21 years ago
An impressive debut comic crime caper featuring oddball characters and situations set in Minnesota. The story centers on ex-cop Joe Crow who gets caught up in the shady shenanigans of a couple of con-artists and a couple of high-rollers. Poker, and all its subtleties, is central to the plot, as are comic books--so it will especially appeal to aficionados of either of those hobbies/obsessions. This is a book that is a bit hard to put down as I kept wanting to see how all the quirky characters would keep bouncing off each other and how the multiple plot threads would culminate. There aren't any profound truths here, just a good fun story.

A writer so gifted with sense of humor

Published by Thriftbooks.com User , 23 years ago
Smooth and slick writing by a born-story teller. So funny that actually made me laugh so many times. Full of lowlives and miserable characters that in the very beginning might confuse you a bit. Pete Hautman is an enjoyable new find that replaced a lesser Carl Hiassen. Mr. Hautman should quit smoking his beloved cigar to prolong his lifespan for all the readers who could appreciate him but not wanting to inhale his second cigar smoke; just joking.

one of the best comic capers of the 90's

Published by Thriftbooks.com User , 24 years ago
Take a cast of characters, including Joe Crow, Rich "Dickie" Wick, Joey Cadillac, Freddy "dumb as a stump" Wisnesky, and the gorgeous Catfish, mix in comic book collectors, used car dealers, cutthroat poker, and the Mob, and set it in the wacky work of Minnesota and you get the perfect mix of scam and comedy that is Pete Hautman's stunning Drawing Dead. I'm a big fan of Hautman's work, and am delighted that his first adult caper is finally out in paperback. Don't miss this one--of the the best of the '90s
Copyright © 2020 Thriftbooks.com Terms of Use | Privacy Policy | Do Not Sell My Personal Information | Accessibility Statement
ThriftBooks® and the ThriftBooks® logo are registered trademarks of Thrift Books Global, LLC