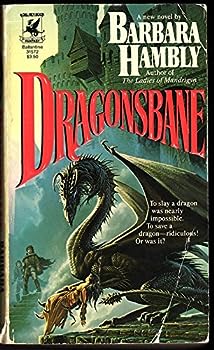 When the Black Dragon seized the Deep of Ylferdun, young Gareth braved the far Winterlands to find John Aversin, Dragonsbane -- the only living man ever to slay a dragon. In return for the promise of... This description may be from another edition of this product.

Hambly - A Fantasy writer of Excellence!

Published by Thriftbooks.com User , 19 years ago
Dragonsbane gives us a dragon of real quality. You can almost hear the timbre of his voice and the scrape of his wings. The heroine Jenny has all the hallmarks of any person - bitterness and love, envy and generosity in equal measure. Their story is not told in excrutiating detail but the detail you get is evocative, tantalising and constructive. This is a book that you can reread and find yourself once again caught up in their lives. This is a real world and these are real people - just open the page and go there!

One of the Greatest!

Published by Thriftbooks.com User , 19 years ago
I almost didn't buy this book when I saw its cover back in the eighties because I was afraid it was going to be one of those "damsel in distress" fantasy novels. But then, I saw a review that tempted me, so I bought it... This has become my novel to reread every year. My first copy became so dogeared, I had to buy more. It's the book I push off on friends and other readers. The book I say I wish I had written.It's adventure, romance, intrigue and magic, all written in the Hambly style. It made me an undying fan of Hambly's work.If I was ever stranded on a desert island with only one book to read, this would be it.

Published by Thriftbooks.com User , 22 years ago
I absolutely adore this book...it's one of the first fantasy books I ever read, and I still pick it up again and again. Jenny's struggle between love and power strikes a chord in any person who reads this book. As an avid fan of any book about dragons, I must say that Hambly's image of them is the one that most closely parallels my own, and I always enjoy this book every time I pick it up. Now that there is a sequel, I look forward to exploring this world that Barbra created in more depth.

A Powerful and Thought Provoking Tale

Published by Thriftbooks.com User , 23 years ago
Looking only at an outline of the plot, Dragonsbane could easily be mistaken for a yet another tale in the "high fantasy" tradition. It contains most of the standard elements that make such stories popular: heroic quests and battles, contests of magic, and the like. Those elements are executed well, and alone could make for a somewhat entertaining story.However, the tale is anything but high fantasy. The heroes of the story are presented as human beings, with human faults and human needs, and nothing is as simple as the legendary ballads would suggest. As much as anything else, the book deals with difficult choices, past and present, that define who the characters are and who they will become.In particular, I found that I could truly empathize with Jenny, a woman torn between her love for her family and her love of learning. "To be a mage, you must be a mage" to the exclusion of all else, she was taught, and every moment spent on other interests meant that much less power, that much less knowledge that she would never attain. Her struggle (and failure) to truly satisfy both of those desires is one of the central issues of the book.Because of this and many similarly deep examples, Dragonsbane is a book that I have read again and again. Its conclusion brings a tear to my eye every time. Unlike most fantasy these days, Dragonsbane contains characters that are truly well drawn and compelling in their humanity. Those who read fantasy only for adventure and who have no taste for any "good literature" may well be disappointed by a book that focuses more on people than on swords and sorcery. However, for more mature readers who want more from a story than a few fights and lightning bolts, Dragonsbane is one of the very best books in the genre.

Barbara at her best

Published by Thriftbooks.com User , 24 years ago
Dragonsbane is easily Hambly's best book to date (26 November 1997). She woos us into her universe, which admittedly is not difficult since there are few new artifacts to engage our attention, but she also manages to woo us into the interior spaces of her characters where we are allowed to see the kinds of choices that people make every day and every lifetime. The book is full of choices -- Jenny Waynest gives up mastery of magic in order to have a relationship with her lover and her sons -- and those choices are constantly called into question, both by the characters themselves and by the situations into which the characters are drawn. Jenny knows that her life could have been very different had she chosen to pursue her magic despite its severe demands; only the dragon is able to confront her when he sees clearly into her heart and mind and asks: "Do you cling to all the little joys because you are afraid of the great ones?" Dragonsbane falters as most Hambly books do: the author is so enamoured of language that the well-drawn tapestry of scene and mood sometimes looks more like the over-busy, tassled throw rugs my Aunt Geneva used to embroider, applique, and give away to all the grandkids. Sometimes, a simple image does the trick. But the great strength of the book is that it is not overwhelmed by the artifacts of the genre. The story is clearly about people, not about magic, and Hambly is able to use the artifacts to seduce us into a story where dragons love gold for its singing of their names. Dragonsbane is the most accomplished, most polished, and most poignant of Hambly's work.
Copyright © 2022 Thriftbooks.com Terms of Use | Privacy Policy | Do Not Sell My Personal Information | Accessibility Statement
ThriftBooks® and the ThriftBooks® logo are registered trademarks of Thrift Books Global, LLC