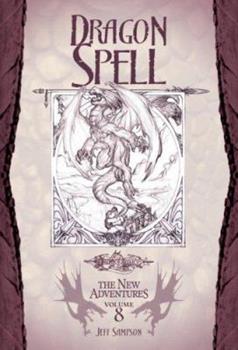 (Part of the Dragonlance Universe Series and Dragonlance: The New Adventures (#8) Series)

The eighth title in the new Dragonlance adventure series for young readers. Dragon Spellcontinues a new series ofDragonlancefantasy adventures written specifically for readers ages 10 and up. Sized to fit the young reader market, the series features a group of young companions who band together for friendship and excitement during the golden age of theDragonlanceworld.

Published by Thriftbooks.com User , 16 years ago
Okay, so I read the first 7 books of this series SPECIFICALLY to get to the 8th one because Jeff Sampson is my best friend. So this review is rather biased, but I will try to be as fair as possible. Continuing the story of the miscreants from Krynn, Dragon Spell reunites the original friends that are left and sends them on their journeys. Unlike some of the post-Asvoria books, I really think Jeff connects with the original INTENTS of the characters. Example: in some of the later books, Sindri reads like a child one scene, then an astute adult the next. In this book, all of the characters seem to have come to an understanding with themselves and their respective missions. The battle scenes do not read like a textbook history describing what goes on (which is a tendancy in some fantasy novels), and the book reads at a very good pace which is appropriate for younger and older readers alike. Younger readers will not be too confused by what is happening and older readers will not be bored by what's going on. Overall, I've been very impressed by this book and I think it's one of the best ones of the series. And I say that not as a friend, but as a reader.

Published by Thriftbooks.com User , 16 years ago
This book was amazing. I don't know who this Jeff Sampson is but if he continues writing as good as he did in this book, he might as well be the next JK Rowling. That's how good he is. IMO. This was the best one in the series. Good work!

Chalk one up for the cowboys

Published by Thriftbooks.com User , 17 years ago
Jeff Sampson is a cowboy. It's good to see more cowboys getting out there. Yeehaw, my friend. Yeehaw.
Trustpilot
Copyright © 2022 Thriftbooks.com Terms of Use | Privacy Policy | Do Not Sell My Personal Information | Accessibility Statement
ThriftBooks® and the ThriftBooks® logo are registered trademarks of Thrift Books Global, LLC