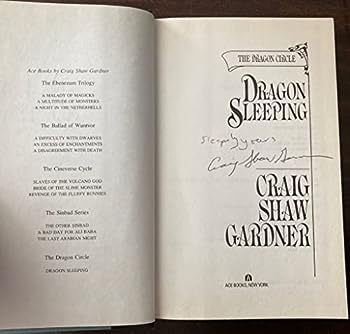 (Book #1 in the The Dragon Circle Series)

Published by Thriftbooks.com User , 17 years ago
This book is, without a doubt, one of the greatest fantasies I have ever read. Imaginative, exciting, compelling, Gardner creates a world that is unlike anything I have met in mainstream fantasy. The characters are real, and their own stories all surface in the midst of this complex story; it is amazing that Gardner is able to maintain the underlying story throughout the series, while still keeping you interested in each character's ordeal. Fantasy stand-bys, such as dragons and wizards, are used in the story, but only in an archetypal fashion. The wizards are closer to polititians than sorcerors, and the Dragon is more of a diety, a destructive god. I have read and reread this series, and each time I come away with more than I had the previous time; it has become more like an old friend, than an old story. If you are a fantasy reader, this series is a MUST READ. Pity that it's no longer in print . . .

Published by Thriftbooks.com User , 17 years ago
I started reading the Dragon Circle books in grade seven. I've read all three of the trilogy about twelve times, literally. I found that all characters are well developed and each serves a purpose, whether it be small or large. Craig Shaw Gardner gives background information on a few characters like Todd and Mary Lou. The plot was excellent and the book was based around a dragon but did not resolve around a dragon, if you understand me. Those of you against Mary Sues and Marty Stus will enjoy this book the most. No character in these books is perfect, each has flaws. What I loved most about this book is the fact that Gardner was able to put himself in the place of his teenage characters and capture their spirit almost perfectly. He was also able to understand the problems that may occur within a household. Personally, my favorite character was Nunn, the main antagonist. Nunn gave the certain spice that each book should have. I found Nunn to be fresh and lively and unpredictable. In this book there is really no one main character. In short these are my favorite books and I, as an eighth grade student, found them better than Harry Potter. Craig Shaw Gardner is a truley unique writer. I've never read any books like the Dragon Circle Trilogy and hope to read more of his books. They are well written and always provide entertainment. This is truley a book that you cannot put down, no matter how many times you've read it.

The Dragon sleeps, but he will not sleep forever!

Published by Thriftbooks.com User , 23 years ago
Fans of fantasy or science fiction would love this. The three books of the Dragon Circle are some of my favorite. Once you finish this book, you won't be able to rest until you read the second!

This book was truly great.

Published by Thriftbooks.com User , 23 years ago
I really liked this book not only because of the colorful characters, but also because of the equally colorful stories that went with them. I loved the way that this book challenged me to keep thinking while it jumped from plot to plot and from character to character. It was really stimulating. I recomend this book to anyone.

One of the best books I ever read!!

Published by Thriftbooks.com User , 24 years ago
I liked all the characters, especially Gardner's "Nick Blake". He was a bit inexperienced at first, but quickly gained experience during the great conflicts of the book. At the beginning of the novel he was shy, but then later he really surprised me with his bravery. Gardner's "Raven" was a good supporting character that showed his true feathers by coming to the rescue in the end. A good first book of a great trilogy.
Trustpilot
Copyright © 2022 Thriftbooks.com Terms of Use | Privacy Policy | Do Not Sell or Share My Personal Information | Accessibility Statement
ThriftBooks® and the ThriftBooks® logo are registered trademarks of Thrift Books Global, LLC