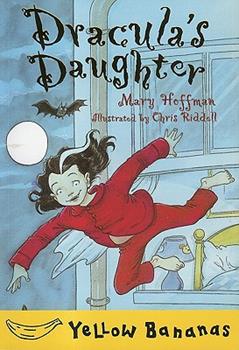 When the Batty's find a baby on their front step they decide to keep her. Angela grows up like any other child, until her teeth appear, sharp and pointed. At Hallowe'en, more spooky things begin to happen too!

Count Dracula shows up to take home his daughter

Published by Thriftbooks.com User , 19 years ago
Once upon a time a baby girl was left on the doorstep of Mr. and Mrs. Batty, who adopted the child and named her Angela (because she looked like a little angel). Angela was a model child until her baby teeth fell out and were replaced by teeth that came to a sharp point, like a shark's. Then her step-parents noticed that Angela liked to eat meat, and beets, cranberry juice, red cabbage and raspberries. The Battys were puzzled, but then they learned the truth: Angela was really the daughter of Count Dracula. Having a vampire for a daughter can be a bit upsetting to any parents. But then on Angela's 7th birthday (October 31st of course), her "real" father shows up ready to take "Fangella" home. "Dracula's Daughter" was the name of a black & white film sequel to the famous Bela Lugosi version of "Dracula," but Mary Hoffman's story puts a fun twist on the idea. This time around Dracula's daughter has been adopted by a couple of people who have to get used to the idea their daughter is a vampire. I wonder what adopted children would think about this story and its implication that a "real" dad could be a real monster, but I am pretty sure Hoffman was not trying to come up with some sort of story to reassure such children. At least, I hope not. Chris Riddell's illustrations make it clear this is supposed to be a charming story and not a scary one, and the pictures of Angela eating raspberries and the first appearance of the Count all decked out in his best gap, do a very nice job of capturing the characters.
Copyright © 2020 Thriftbooks.com Terms of Use | Privacy Policy | Do Not Sell My Personal Information | Accessibility Statement
ThriftBooks® and the ThriftBooks® logo are registered trademarks of Thrift Books Global, LLC