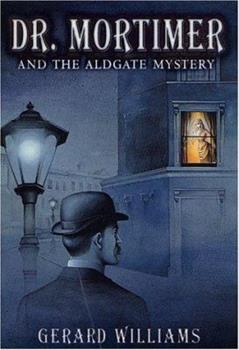 Dr. Mortimer and the Aldgate Mystery

Set amid the clip and clatter of hansom cabs and the popping of the gaslights, this intriguing mystery introduces Dr. James Mortimer, the man who brought the case of the Hound of the Baskervilles to the attention of Sherlock Holmes. Here, Dr. Mortimer tells a tale of how he came across his second and most challenging case ever. In 1890, the young Dr. Mortimer is numb with grief over the death of his wife and decides to close his own practice and begin...

Published by Thriftbooks.com User , 20 years ago
As readers of the Canon will recall, Dr. Mortimer brought Sherlock Holmes one of his greatest challenges, the case of The Hound of the Baskervilles. In the Aldate Mystery, Mortimer fills in as locum for a London physician. One of his new patients is Lavinia Nancarrow, a mysterious young woman who is kept a virtual prisoner in her room. Dr. Mortimer and his friend Dr. Violet Branscombe discover that Lavinia's past holds a dreadful secret, one that an old family tutor will do anythng to learn--even commit murder. When Lavinia vanishes and the tutor is found dead in Lavinia's bedroom, the doctors fear for her safety. Will they be able to find her in time to save her from a charge of murder?Well-written and nicely paced, this book brings the much-loved London of shifting fogs and hansom cabs to life once again!

Published by Thriftbooks.com User , 20 years ago
In 1890 Dr. James Mortimer is unable to continue practicing medicine following the death of his wife due to diphtheria so he sells his practice. At the urgings of his friend, Dr. John Watson, James moves to London and joins the medical practice of Dr. Ferraby as an associate so as too not dwell on his loss. James' first patient is Lavinia Nancarrow who seems to be a virtual prisoner of her guardian, Archibald Boynton-Leigh. Unable to resist the urge to find out about this unusual arrangement, James begins to investigate what hold Archibald has on the charming Lavinia. However, unlike his good friends Holmes and Watson, sleuthing is a relatively new game for the doctor, who is not prepared for the impossible murder that he feels obligated to solve. DR. MORTIMER AND THE ALDGATE MYSTERY is a wonderful Victorian mystery that brings to life a more ominous and creepy side of London. The story line is very entertaining and the brief appearance of Watson should thrill the Holmes crowd. The mystery is clever, but Mortimer, whose first starring role is a smashing success (see HOUND OF THE BASKERVILLES for a secondary role), will bring accolades to Gerald Williams.Harriet Klausner
Trustpilot
Copyright © 2022 Thriftbooks.com Terms of Use | Privacy Policy | Do Not Sell My Personal Information | Accessibility Statement
ThriftBooks® and the ThriftBooks® logo are registered trademarks of Thrift Books Global, LLC