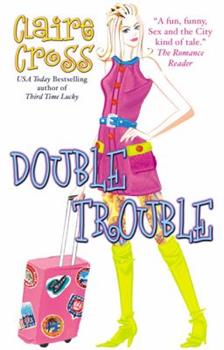 (Book #2 in the The Coxwells Series)

by Claire Cross and Deborah Cooke

In this spin-off to Third Time Lucky, Marlays's twin sister has abandoned her husband and children. But when Marlays steps in to help the family, she never expects to step into her brother-in-law's heart.

Published by Thriftbooks.com User , 17 years ago
I loved this book!! The heroine was one sarcastic puppy (kinda like me), opinionated (like me) and had an answer for everything (me again). I enjoyed reading this book and laughed out many times. The book was very witty AND did not take itself too seriously. Just like a good, fun book should be. Good work Mrs. Cross!!!

Published by Thriftbooks.com User , 17 years ago
This book is wonderful, funny and touching. Yeah, I know people throw these terms around but this really is an unfairly neglected favorite. Maralys' voice is a joy to read. The revelation of the events that have shaped her unique character is particularly effective. Claire Cross/Delacroix does a great job with the first person; I've been searching for a new title for years, in vain, alas. Grab it - get one for your best friend while you're at it.

Both Funny and Serious - Good Read!

Published by Thriftbooks.com User , 18 years ago
When Maralys O'Reilly received the phone call from her 10 year old nephew telling her he and his younger brother were stranded because their mother, her twin sister Marcia hadn't picked them up, she raced across Boston to get them. Bringing them home she was surprised to find a note - from her sister not addressed to her, but hey, under the circumstances she read it - telling the boys father, James that she was leaving - and good luck with the boys! Maralys and James had been at each other's throats for a long time, but she'd never imagined there was so much trouble in paradise. Besides Marcia leaving for parts unknown, James was deep in debt, losing his job and his inheritance. Surviving a bad marriage and climbing out of debt herself, Maralys wasn't sympathetic for James, even though Marcia seemed to be in the wrong to just abandon them. As a web-designer running her own business, Maralys was emerging into her own writing code and running an advice column on the web. She now found herself offering advice to James on downsizing and living more modestly. Surprised when he took her advice, started downsizing and moved into a middle-class neighborhood, Maralys, who'd used anger as a safeguard to her heart, was now looking at James in a new way. When James started putting moves on her, Maralys began to wonder if he was looking for a substitute wife or, was he looking for more. More importantly, was she ready to take a chance on love again. I found this contemporary to be both humorous and serious. It demonstrates how innocent comparisons made by parents can have an effect on shaping a child's psyche. In such a way, the author characterized Maralys as this wise cracking cynic who at thirty something was still a rebel - using cynicism as a shield to mask barbs still being inflicted by an aging father and caused her to retreat into the safety of her cyber world rather than living in the real world. James was also drawn as a bit more complex then just the abandoned husband, whose live had been given a major shake-up and now was learning how to be a real father. The kids were sweet, even as they too were given a `wake-up' call from living high to a more modest way of life. While not your ordinary romance, especially with the ex-brother-in-law getting involved with his ex-wife's sister, it is still a romance, but with a surprising twist that readers will enjoy. The often-irreverent musings of advice on the internet will have you all thinking of Dear Abby, and there are truly some gems of sage advice to the lovelorn here! - BOTTOM LINE - Although not your typical boy meets girl romance - it is amusing and provides some food for thought on how innocent remarks made in the hearing of little ears can have life-changing repercussions. --- Marilyn, for www.contemporaryromancewriters.com ---

Published by Thriftbooks.com User , 21 years ago
Maralys O'Reilly is an internet advice columnist who is a loner with no desire to marry or have kids. Then one day her nice, comfortable, "I am an island" lifestyle is totally disrupted. Her nephews Jimmy and Johnny call and tell her that their mother, Maralys's twin sister Marcia, didn't show up to get them up from swim practice. Not long after, the news gets worse, much worse. After Maralys takes the kids home, she finds a note from her sister declaring she's dumped her husband James and her two sons. James Coxwell is the Number Three criminal attorney in the city, rich, powerful...and on the fast track to oblivion. Not only has his wife dumped him, he's just found out his own father is ousting him from the family firm on behalf of another relative. At age 42, he's all washed up. Maralys has never considered herself the save-anyone type, but the situation of her brother-and-law and nephews is a mess. Before she knows it, she agrees to move in and help out, and there is no telling where the heck this will all end.This book is more women's mainstream fiction than typical romance, in that it is written in first person and it violates a major taboo of romance: the book starts out with the hero not only married, but married to the heroine's sister. However, its ending does fulfill normal expectations of romance readers, so if you are a lover of traditional romance, you can rest assured you will be satisfied with how the story comes out. The plot itself has the sharp, dark-humor tone of two romantic comedy movies I enjoyed a lot, My Best Friend's Wedding and The Truth about Cats and Dogs. The characters are sharply drawn, both protagonists intelligent, strong, and honest, but with the interesting flaws of cynicism in both of them and more than a little despair in James. The two children are also cute and often touching in a believable and enjoyable way. If you are looking for a contemporary romance that is very much out of the ordinary, Double Trouble might be just the ticket for you.

Published by Thriftbooks.com User , 21 years ago
In Boston, Maralys O’Reilly enjoys providing netiquette advice to users. However, her quiet life ends when she receives a call from her preadolescent nephew who tells her that their mother Marcia has failed to pick him or his younger brother up. Their father James remains en route from California. Maralys picks up the kids and takes them to their suburban home. Not long afterward, James arrives home to learn Marcia left him. A few days later, James visits Maralys and kisses her, but she says she is not a Marcia substitute even if she is her twin. (...) DOUBLE TROUBLE is a very funny contemporary romance mostly told by the irreverent Maralys’ perspective with her Internet musings as a key element in understanding her. James and the support cast enhance readers’ comprehension of what makes Maralys tick. Though James’ problem with his father is an unnecessary sidebar, even if it places him in financial jeopardy, fans will fully appreciate Claire Cross’ amusing tale.Harriet Klausner
Trustpilot
Copyright © 2022 Thriftbooks.com Terms of Use | Privacy Policy | Do Not Sell or Share My Personal Information | Accessibility Statement
ThriftBooks® and the ThriftBooks® logo are registered trademarks of Thrift Books Global, LLC