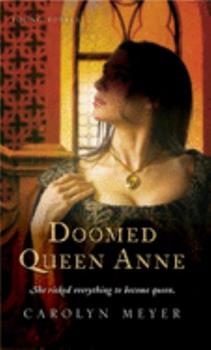 (Book #3 in the Young Royals Series)

Though born without great beauty, wealth, or title, Anne Boleyn blossomed into a captivating woman. She used her wiles to win the heart of England's most powerful man, King Henry VIII, and persuade him to defy everyone--including his own wife--to make her his new queen. But Anne's ambition was her fatal flaw. This is the true story of the girl everyone loved to hate. Carolyn Meyer's engrossing third novel in the award-winning Young Royals series tells...

Published by Thriftbooks.com User , 17 years ago
The book I read was called Doomed Queen Anne, by Carolyn Meyer. The story is based upon the life of Anne Boleyn, leading to her death. Her childhood was a hard one, especially being the ill-favored child in the family. Her sister, Mary was very well favored. This caused Anne to have a lot of jealousy. The story leads on to tell about Anne's life in the Netherlands and in France in the courts of Archduchess Margaret and Queen Claude. When Anne was sent back to England later, she became a lady in waiting to Queen Catherine of Aragon. Anne was hated in Catherine' s eyes because Anne's sister was a favorite of King Henry the VIII. Catherine took out her great displeasure on Anne. Anne could bear it no longer. Her jealousy erupted and vowed to take the place of Mary as a great favorite of the King, and she said to Mary that one day she would become Queen and Mary would kneel before their feet. As a different type of lady with dark looks, she used her French skills, ambition, and her singularity to win the King's heart. Finally, the King asked Anne's hand in marriage, but the King had to divorce Catherine. Finally, after six long and frustrating years, Anne had finally achieved what she vowed to do, become Queen. The last thing she had to do was to bear the King a son. This she could not do. Once she had born a daughter and not a son, the King made false claims against Anne for treasonous acts. She was convicted and sentenced to death. Anne was betrayed but she died boldly as she had lived. Doomed Queen Anne was a wonderful book. I've read it six times. This book really sparked my interest in Tudor History, and it gave me the urge to read other books like it. I liked the way it told the story through someone else's eyes and the amount of emotion. The point of view Anne had was the most interesting part and it gave me mixed feelings and thoughts, which is how I know I like a book. I would recommend this book to someone who likes historical fiction books or is just looking for an enjoyable book to read. From reading it, I know that this book is my all time favorite and I know that I will continue reading it forever.

Published by Thriftbooks.com User , 17 years ago
This book unfolds the life of Anne Boleyn, a ill-favored girl that lived under the shadow of her sister throughout her childhood. Anne's sister, Mary Boleyn, was the prominent type beauty during the 16th century in England. Mary had been the mistress of King Henry VIII. However, as young Anne came to England from the French court as a stylish graceful lady, she soon caught the eye of King Henry. Anne Boleyn played her "games" upon the men in the English court and did all she could to win the heart of King Henry, the most powerful man in the nation. Anne's ambitions and strong will guided her through her struggling to be queen, the every peril in her life, and her uncertain path to power. Anne Boleyn was a mysterious yet prominent female figure of the Tudor family and her only daughter, Queen Elizabeth I, became on of the most prominent rulers in history. Though Anne Boleyn was executed when King Henry lost his interest in her, Anne's wits and determination led her to the fullfillment of her words to Mary, "One day, I shall be queen and you will kneel before me!"

The girl everyone loves to hate

Published by Thriftbooks.com User , 18 years ago
This book is great... all of the books in the series are! Still, this is the first one I read and it wasn't really my copy...my friend Rosalind hated me for a few after I wouldn't give it back. Still, it portrays Anne Boleyn in am interesting light. You hate her, but you want her to succeed. READ IT!

The queen that won all, and lost all

Published by Thriftbooks.com User , 19 years ago
This, the third book in the Young Royals series focuses on the life of Anne Boleyn, second wife of Henry VIII, and mother to the Virgin Queen, Elizabeth. From the time she was born, Anne had been the dark sheep of her family. Not only did she have a sixth finger, but she also had a black mole. Anne had neither the beauty of her older sister Mary, or the importance of her younger brother George. But with an ambition as high as the mountains, Anne vowed one day that her sister, Mary, the King's mistress, will one day kneel at her feet. As a lady-in-waiting to Queen Catherine in Henry's court, Anne finally begins to see her wish coming true when she finally catches Henry's eyes. Though Anne knows Henry loves her, she knows that is not enough. The people's overall hatred of her and loyalty to Queen Catherine might ultimately be her downfall. When finally she bears Henry's child, she is finally declared Queen, a title she had vied for so many years. Only one nagging issue is in the back of her mind: What if the child isn't a son? What if she fails Henry's ultimate wish to have a male heir? What would become of her...This new edition to the Young Royals series has to be my favorite. It was quite accurate and Anne was potrayed perfectly as a girl who just wanted to prove herself worthwhile to a world that shut her out. To many Anne was the ulimate symbol of evil, but after reading this book, my opinion of her changed. She was in a tough position, but ulimately her big ambitions was also her downfall. This book definitely will be more fitting for older readers. Doomed Queen Anne also probably appeals to an older audience than the previous two books. Definitely a great book to add to your collection.

A wonderful addition to the Young Royals

Published by Thriftbooks.com User , 19 years ago
This has to be my favorite book in the Young Royals, they keep getting better each time. This story begins with Anne Boleyn in the Tower of London, the day before her execution. She reflects on the past. The recollections begin with her jealousy of her older sister, Mary, and how she is the king's mistress. Anne tells her I will be Queen one day and you will kneel at my feet. Anne will stop at nothing to get what she wants. King Henry VIII falls in love with her, and she presses further to become his wife and Queen. Everyone assumes she is a witch, although Anne is as normal as any of the others. Once she becomes Queen, and after giving birth to Elizabeth (although everyone predicted a son), Henry slowly loses interest in Anne and has another mistress. She is hopeless, the king and his advisors will create every lie they can to rid England of Queen Anne. This is an awesome book, it gives a different view to "the girl everyone loved to hate." I would highly recommend this as well as the other books in the Young Royals series.
Copyright © 2020 Thriftbooks.com Terms of Use | Privacy Policy | Do Not Sell My Personal Information | Accessibility Statement
ThriftBooks® and the ThriftBooks® logo are registered trademarks of Thrift Books Global, LLC