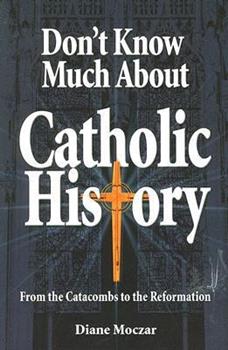 Don't Know Much About Catholic History: From the Catacombs to the Reformation

Take a vivid crash course through Christian history unlike any you've taken, populated by intriguing figures and incredible events. In her brisk, conversational style, Dr. Diane Moczar paints a... This description may be from another edition of this product.

Published by Thriftbooks.com User , 12 years ago
This is a must for everyone who is interested in truly understanding their faith.. great book

Published by Thriftbooks.com User , 13 years ago
This little book--it's not even 200 pages--covers Catholic history from the Roman era to the Reformation. Of course anything this short cannot be comprehensive; the author doesn't even try. Instead, it's a witty overview of some of the more important points in Catholic history. A nice bonus is that, at the end of every chapter, the author gives a list of other books you can try for reading in more depth. Moczar finds the important issues that were resolved by the church in every era. She highlights Tertullian and Clement of Alexandria during Roman times, St Bede and Gregory the Great later. During the era of the Crusades, Moczar highlights the Assassins. Muslim "Ismailites were said to practice Taqiyya, dissimulation of one's identity and beliefs" (p 95). One such was "Hasan...sometimes called 'the Old Man of the Mountain'...who would drug young men with hashish" (p 95) before sending them out to kill and be martyrs. This would also be a good book for young adults, since it is lively and short.

Published by Thriftbooks.com User , 13 years ago
Those who have read Diane Moczar's popular history writings (i.e. history not geared to specialists), such as her accounts, by period and century, of Christianity, from a stoutly Roman Catholic standpoint, as serialised in Latin Mass Magazine (and perhaps elsewhere), know that she writes intellectual, art, chronological, and political history in a marvellous blend that is entertaining as well as informative. Her point of reference is resolutely Roman Catholic of a traditional and scholastically orthodox sort (maybe even a tad too triumphalistic), but any reader of another persuasion, differing on the details or even more largely than that, still can benefit from her lucid prose and the sheer scope of her grasp of history in all of its aspects. This book provides her with yet another forum to make her views and writings better known. Get it!

Published by Thriftbooks.com User , 14 years ago
Rather than give you a long dissertation about how this book is not like other excellent but lengthy and time-consuming historical books, I'd just like to say that this a fantastic introduction to Church History, which is exactly what it's supposed to be. I don't think it's fair to penalize a book simply because it's not another book. Dr. Moczar compiled a series of articles she's been writing for the Latin Mass Magazine into a small book which makes the thousands of years Church History accessible to the busy, ill-informed, over-worked, under-catechized modern Catholic. It is an easy read and very enjoyable. To state the obvious, you will not be a history buff after reading this 176 page book. You will not have a thorough and in-depth knowledge of Church History. What you will get is a quick overview of the major events, saints, sinners, and themes that have shaped all of Western Civilization. This book can give you a very high-level framework upon which you can later go back and build, especially since Dr. Moczar recommends additional resources at the end of each chapter. And these are reliable resources. No liberal tripe. Hopefully this will whet your appetite so you'll go on to read other books. At the least you'll learn a little of the Church History that they used to teach in Catholic schools. I'm looking forward to Volume II.

Published by Thriftbooks.com User , 15 years ago
Like her Ten Dates Every Catholic Should Know, Diane Moczar's re-released (and renamed) "What Every Catholic Wants to Know" is a perfect introduction to Catholic history. The difference between the two books lies in the format. While "Ten Dates" uses ten historical vantage points to view the role of divine action -- Providence -- in Christian civilization, "What Every Catholic Wants to Know" is more of a survey of critical events, from the Roman era until the outbreak of the Protestant movement. The book opens with a provocative description of a society plagued by corruption, moral decay, and fears of endless wars and terrorism. Moczar is describing Rome, but there is an obvious parallel to the early twenty-first-century United States. Throughout the book, Moczar uses parallels like this to teach lessons and enliven her discussion. Each era is given two chapters; one on its general history and another on its culture. Readers generally familiar with the timeline of the former will appreciate the insights gained from the latter. Moczar aptly demonstrates the essential role the Church played in building our unique civilization -- its forms of government, its art, its philosophy, its values, and its literature. "What Every Catholic Wants to Know" is a great resource for a discussion group, as each chapter ends with "Food for Thought" questions and valuable suggestions for further reading. Appendix B will be of great use to parents and students seeking to know the merits of major works of history as she examines books by masters like Henri Daniel-Rops, Monsignor Philip Hughes, and Warren Carroll. The book is suitable for adults, teens, and even "tweens."
Trustpilot
Copyright © 2022 Thriftbooks.com Terms of Use | Privacy Policy | Do Not Sell My Personal Information | Accessibility Statement
ThriftBooks® and the ThriftBooks® logo are registered trademarks of Thrift Books Global, LLC