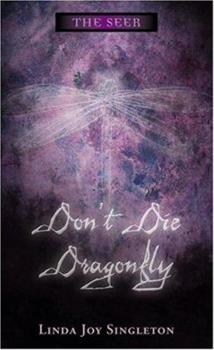 After getting kicked out of school and sent to live with her grandmother, Sabine Rose is determined to become a normal teenage girl. That's why she hides her psychic gift from everyone at her new school, pretending that the predictions she helps write for the school newspaper are just fun nonsense.

The best book ever!

Published by Thriftbooks.com User , 15 years ago
The author Linda joy was trying to give a point that even thought your different there's always someone out there that needs your powers. Sabine has what it takes to help out a friend in need when she gives up hope and try's something unbelievable. I give this book two thumbs up when it kept me at the edge of my chair waiting to read what was going to happen next. This isn't the only book there is out. There is three parts you might want to start with this one first and keep up with the good drama in the books. It's great Take my word for it!

Published by Thriftbooks.com User , 16 years ago
Sabine Rose is trying to fit in with the students in her new school. She lives with her grandmother. Her psychic abilities forced her out of her last school, so the last thing she wants is for the visions to begin again. This time she's in with the crowd - her best friend is a cheerleader and she hangs out with the team. She's on the journalism team with Manny, who writes a column for the high school newspaper. Manny introduces Sabine to Thorn, who is also gifted in her own way. When Sabine is framed for the thefts, Sabine and Thorn team up with others to discover who is vandalising the school and stealing from the classrooms. In the midst of all of this, Sabine keeps having visions of a dragonfly tattoo - and the person with it is in danger. How can she prove her own innocence and prevent disaster while preserving her sanity and secrets? A lively YA novel with the paranormal elements, this novel touches on many of the teen issues and how these characters come to term with their lives. I look forward to the next in this Seer series, Last Dance.

Published by Thriftbooks.com User , 16 years ago
How does a girl with psychic visions blend in with her surroundings and find a new normal? Easy! Survive a mysterious move, switch schools, create surface friendships, and spend most of the time running from the one thing that makes you who you are...a girl with a paranormal gift and a cranky spirit guide to boot! Sabine Rose may seem normal by anyone's definition, but she sees visions that could have deadly consequences and knows she lacks the power to change them. Or does she? When Sabine receives a psychic warning about a girl with a dragonfly tattoo, her first inclination is to protect her deepest secret, but as the visions become more intense and the threat more imminent, she knows she must uncover the girl's identity and warn her of the danger lurking in the shadows. Singleton, author of the Regeneration and Strange Encounters series, is a veteran series writer for the mid-grade and young adult audience. Don't Die, Dragonfly! explores the other-realm possibilities of an otherwise average teen, with a taste of intrigue and ever-present danger wrapped in outrageous, frightening predictions. The heroine, strong and feisty on many fronts, fears what makes her most vulnerable, not unlike the challenge of most teens. One of the most interesting characters in Sabine's life is Opal, her bossy spirit guide, who with a little imagination takes on a Paula Danzinger (author of Amber Brown series/Scholastic) persona, complete with shimmering sequins, golden threads, and swirls of dancing lavender scarves. Opal is unique in that she offers advice in not-so-gentle nudges, but she never steers the main character on a path not of her own making, even though she's often outwardly impatient. She leaves the realizations up to Sabine, simply offering clues, warnings, and words of wisdom as guidance. Only after Sabine acknowledges this source of wisdom does she begin the journey to self-discovery and an appreciation for her gift. Every page tingles with paranormal activity...a glittering of fairy sprinkles and otherworld whispers. Singleton's characters--a confidant, a raging enemy, a Goth girl, a quirky grandmother, a mysterious roommate, and a delicious love interest--share in Sabine's treacherous quest, adding several intricate layers of subplot. The surprising twists and page-turning cliffhangers literally pulsate with dramatic tension, and the novel's pace, in near-breathless passages, runs full-throttle as the reader approaches the story's climax and vows to untangle each perilous detail. Singleton's next installment debuts in summer 2005.

Published by Thriftbooks.com User , 17 years ago
Sabine Rose's psychic gift got her kicked out of her last school and sent to live with her grandmother, Nona, who also has the "family gift". So Sabine hides her abilities in her new school, pretending to be normal. She is on the school newspaper staff and helps Manny with his Mystic Manny column. Her best friend is a cheerleader and Sabine often helps the entire squad with their practices and banners. She has a fabulous new boyfriend, Josh, that she met while saving his life (and he will never find out how she knew he was in danger if she has anything to say about it.) It sounds as though Sabine has everything a normal teenager could ever wish for. However, Sabine still sees ghosts, spirit guides, and visions. Josh's best friend is jealous of her. Dominic is Nona's newest house guest with his own special talent. Someone vandalized the school and some things have been stolen as well. Manny has always wished he had some sort of psychic talent. Even though he does not, he is still very good natured and keeps an open mind. He knows Sabine is more than normal and confronts her with it. Once she opens up to him, Manny introduces her to Thorn. Thorn likes the Goth look. It keeps people from getting too close to her. Thorn has her own special "gift". Manny, Thorn, Dominic, and Sabine, team up to investigate the vandalism and theft. But someone knows Sabine is out to locate the vandalizer and begins to frame her for it all. In addition, Sabine keeps having visions of a teen girl with a dragonfly tattoo on her wrist being surrounding by danger and death. Somehow Sabine must prove her innocense and warn the mystery girl with the tattoo without revealing her psychic gift to everyone. ***** W-O-W-! You will not want to put this awesome book down! Sabine, Thorn, Dominic, and Manny make a wonderful investigation team. Just think of all the things this group could do if they stay together. It is better than the TV show "Charmed" could ever be. I cannot wait until book two, "Last Dance" comes out. ***** Reviewed by Detra Fitch of Huntress Reviews.

A great new series with an eerie twist...

Published by Thriftbooks.com User , 17 years ago
Since I am an unabashed fan of psychic series books, I was delighted to hear about The Seer series from one of my favorite series writers: Linda Joy Singleton. The first book, DON'T DIE DRAGONFLY, fulfilled my hopes perfectly -- the books was fast-paced and riveting with great characters. Sabine deals with normal teen things: how to get the school hottie to notice her, how to balance her friendship obligations, how to solve the mystery of the violent vandal without letting on that she's psychic. Okay, the last one isn't exactly normal. But, compared to the other things thrown into the mix -- a bossy spirit guide, a mother who doesn't want a psychic in the family, and a past history that includes being thrown our of school -- a mystery sounds normal enough. The author manages to juggle all these elements with skill and style -- keeping the reader guessing almost as long as Sabine. This is a great first book in what promises to be a fascinating series. I'm looking forward to the rest and I predict teen readers will too.
Copyright © 2020 Thriftbooks.com Terms of Use | Privacy Policy | Do Not Sell My Personal Information | Accessibility Statement
ThriftBooks® and the ThriftBooks® logo are registered trademarks of Thrift Books Global, LLC