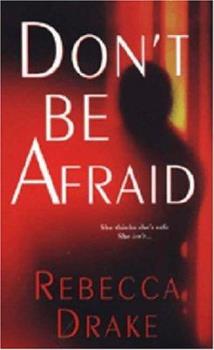 Steerforth, Connecticut, was once an idyllic, sleepy New England town. But now, the leafy streets and picture-perfect houses have turned shadowy and menacing, every detail suddenly becoming suspect. A serial killer has come to Connecticut. He is watching, homing his skills, waiting for the perfect time to make them pay.

Published by Thriftbooks.com User , 15 years ago
This thriller has everything going for it: complex, sympathetic characters. Interesting subplots. Lots of action and suspense. A really creepy villain. And a bundle of obstacles that our heroine gamefully hurdles in creating a new life for herself. It keeps you guessing till the very end. I couldn't put it down!

Published by Thriftbooks.com User , 15 years ago
In Don't Be Afraid, the protagonist has a problem. She's trying to break into the real estate business as an agent, but dead bodies keep turning up in her homes and she's the prime murder suspect. Rebecca Drake takes this thrilling plot and goes two steps further. She adds fully drawn characteristics and singing prose -- a combination not often seen in debut fiction. Kudos to Drake for a job well done.

Published by Thriftbooks.com User , 15 years ago
This book will keep you up at night. In this notable debut, Rebecca Drake has made it clear she understands the genre and can write a book worthy of a reader's time and attention. "Don't be afraid" to dig into this book and spend time with a sympathetic heroine and a villain that will forever live in your nightmares.

Amazing first novel...can't wait for her next

Published by Thriftbooks.com User , 15 years ago
This is a thriller that hangs together from the beginning to the end. No loose ends at the end, and unlike many mysteries and thrillers, the ending doesn't disappoint. Rebecca Drake writes with a style that is complex and mature, yet easy to read. She developes the characters well, and provides some surprises along the way. She manages to touch some of today's hot topics naturally in the development of the plot, but is not preachy or contrived. A thoroughly enjoyable read!

Published by Thriftbooks.com User , 15 years ago
Sick of her husband cheating on her, Amy Moran leaves Manhattan and moves with her asthmatic daughter Emma to the small Connecticut town of Steerforth where major crimes seldom happen. Amy gets a job as a realtor and she goes to track fellow realtor and good friend Sheila at a house that they are selling. When Amy arrives at the place, she finds Shelia's dead body in an upstairs bedroom stapled to the floor. At first the police believe Sheila's abusive ex-husband is the murderer but when they finally catch up to him, he has an airtight alibi. Attention shifts to Amy when she finds the owner of house she is trying to sell murdered in the same way as Sheila died. The police take her in for questioning but release her when her daughter has a severe asthmatic attack. Detective Mark Juarez discovers that a serial killer using the same M.O. was operating in New Jersey but was never caught. Amy hopes the police have better luck in Steerforth because evidence points to her as the next victim. DON'T BE AFRAID is a high octane thriller that starts off at warp speed and never slows down for an instant. Unlike many works in this sub-genre, the author doesn't neglect her characters, writing them as three dimensional people who have flaws but except for the killer are basically good people. Rebecca Drake has created a heroine who is easy to like but it is her daughter who steals the show. Harriet Klausner
Trustpilot
Copyright © 2022 Thriftbooks.com Terms of Use | Privacy Policy | Do Not Sell My Personal Information | Accessibility Statement
ThriftBooks® and the ThriftBooks® logo are registered trademarks of Thrift Books Global, LLC