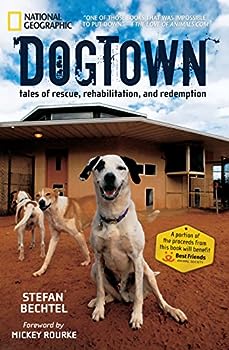 This description may be from another edition of this product. Now in paperback, this companion to the hit National Geographic Channel show, DogTown, tells the moving stories of homeless dogs and their caretakers at the Best Friends Animal Society, evoking both...

Working for a better society, one animal at a time

Published by Thriftbooks.com User , 11 years ago
Anyone familiar with Best Friends Animal Society will know what to expect from DogTown: Tales of Rescue, Rehabilitation, and Redemption. The Best Friends magazine and website are absolutely top notch in production values, and this book is equally effective. If you are a dog lover, prepare for a full court press on your emotions when you read this book. The techniques that have been so effective in spreading the Best Friends message are in evidence here, making for a highly readable book. Best Friends is a leader in the no-kill movement and works on all fronts to rescue, rehabilitate and redeem animals. The Society was well positioned for rapid response to Hurricane Katrina and some of the dogs featured in the book came from that devastated area. Best Friends owns and leases nearly 38,000 acres of land in Utah, boundaried by some of the nation's most glorious national parks, in a canyon formerly used for filming Westerns. There they run the Best Friends Animal Sanctuary, where 2,000 animals make their (hopefully temporary) homes and 4,500 people volunteer every year. The canine section, Dogtown, is well-known as the subject and site of National Geographic TV program of the same name. The goal for all Best Friends animals is a "forever home"--in other words, adoption. Their basic principle is that no animal is too handicapped, unsocialized, aggressive, or unappealing to be rehabilitated and placed in a home. The stories are told by Best Friends workers, veterinarians, volunteers and supporters, and feature dogs from many backgrounds, many of them rescued from hoarders, puppy mills, or dog fighting operations. The book opens with the sad story of football player Michael Vick's fighting dogs. The reader's tears of sympathy for the dogs are tempered by the happy endings, and each story also highlights some aspect of the society's work. A highly effective mix, and a fascinating glimpse into the methods used to undo the damage some of these dogs have suffered. There is a brief mention of Best Friends' origin in a group of seekers who "dropped out" during the 1960s. The history of the organization would be a story of its own, but this book is beautifully complete in its focus on today's work and the dogs who benefit from it. The society believes that kindness to animals leads to a better society, and this moving little book makes that goal seem both worthwhile and attainable. Well done, Dogtown!

Their Stories Never Get Old

Published by Thriftbooks.com User , 11 years ago
Superb!! If you have watched the tv show, you will recognize some of these dogs... I encourage you to read it anyway. Their stories do not get old or less touching in the retelling. Read and recap the lives of Georgia, Wiggles, Bones, Bruno, Vivian and more. Some of them were at one time Michael Vicks dogs, pit bulls bred to fight that survived appalling circumstances. Two dogs covered in this novel are Katrina survivors. A different trauma, but with lifelong effects. My heart goes out to these dogs and I am glad there is an organization that takes care of them. I also found this educational. There are bits by Pat Whitacre that offered me great insight on training do's and don'ts regarding my own dogs. I realize I have gone about some things the wrong way and thankfully, I can remedy my technique, thanks to this book. Higly recommended whether you have watched the show or not. For those not familiar with the show, it is on National Geographic channel.

A good read and a good cry.

Published by Thriftbooks.com User , 12 years ago
DOGTOWN: Tales of Rescue, Rehabilitation and Redemption, tells the stories of 15 dogs who were saved from abuse and neglect, from puppy mills, dog hoarders, or the brink of death. Out in the redrock canyonlands of southern Utah, about 90 miles north of the Grand Canyon, a visitor turns right off the paved road and enters a long winding gravel road into Angel Canyon and a place that's just short of miraculous. Nestled in this mystical canyon lies DogTown, the largest no-kill animal sanctuary in the United States, where at any given moment about 500 dogs are being housed, cared for and rehabilitated. Many of these animals are so sick, abused or neglected that they would have been deemed unadoptable in other shelters - and anywhere but DogTown would be put to death, usually within three to five days. But at DogTown, no animal is considered beyond the reach of love, and all deserve a second chance. It was here that 22 pit bulls rescued from Michael Vick's infamous dogfighting ring were sent in 2007, after the dazzling quarterback - the highest paid athlete in the NFL - was sent to prison two years for a variety of crimes related to dogfighting. These animals, scarred, shut-down and traumatized, have been coaxed out of their shells, trained to trust, and many of them adopted by loving families. Bingo, a painfully shy street dog found on the streets of Puerto Rico, learns to love and trust a human. Aristotle, a little terrier so disfigured by a mysterious ailment he looks like "a raw chicken," is restored to wholeness by the kind of veterinary care he would never get anywhere else. Rush, a stately German shepherd rescued from a war zone in Lebanon, learns to overcome a crippling post-traumatic stress disorder. Almost anywhere else, these stories would never have happened. But at DogTown, they happen every day.

This one will make you proud

Published by Thriftbooks.com User , 12 years ago
This book is a collection of stories written by both paid staff and volunteers at the Best Frieds Animal Society in Kanab, Utah, about their experiences with dogs that most of society cannot or will not help in their time of most need. My wife and I have visited the Best Friends sanctuary in Utah numerous times and as volunteers worked with their staff and other volunteers in Mississippi and Louisiana in the aftermath of Katrina. We have seen first hand the dedication and professionalism of the Best Friends organization and know the stories in this collection are not make believe. These are the real thing and the amazing thing is they do it day in and day out. As the title suggests the stories, included in fifteen chapters, deal with the rescue, rehabilitation, and redemption efforts of the Best Friends group in the face of what is sometimes overwhelming odds. You will meet the aftermath of NFL star Michael Vick's shameful activities and the heroic efforts to salvage the dogs he tortured and maimed; the story of Rush, the dog sent to Best Friends "Dogtown" in Kanab from the Lebanon war zone is amazing and will renew your faith in humanity; and the story of the last days of Bruno will forever remain in your mind. These are just a few of the stories that illustrate the work and mission of this remarkable group of people that deal with animals that have literally looked into the face of evil. This is not a touchy-feely type book. It is the story of people with soul that not only talk the talk but walk the walk when it comes to animal welfare. More and more books about animals are being published every year but this one is the real thing. This book will make you proud and give you hope in the face of what increasingly seems to be overwhelming odds in what is truly saintly work; the rescue, rehabilitation, and redemption of those that cannot help themselves. Highly recommended.

Published by Thriftbooks.com User , 12 years ago
There are lots of dog owners, but not all of them are dog LOVERS. The difference between the average dog owner, who sees his pet as something that has little more value than a chair he owns, is worlds apart from a dog lover, who cherishes his animals and always wants the best for them. Dog lovers make up the population of Dog Town, and they get to tell their stories about dogs they have cared for and rehabilitated over the yrs. The book starts out with the sad story of Georgia, one of Michael Vick's Bad Newz Kennel pits that was trained fron puppyhood to maim and kill. Vick and his kind treat the dogs in a way that make Hannibal Lecter look like a sweetheart. If ESPN played videos of dog fights and how the dogs are treated, I doubt there would be any supporters for Vick and his second chance in the NFL. Dog Town took many of Vick's dogs against the advice of other animal groups who believed they could not be retrained. The people at Dog Town are heroes in every sense of the word, and this book inspired me to work harder in my own community for the welfare of dogs. I also gleaned information about training techniques for dogs that are shy or have food aggression. This is not a dog training book per se, but the stories give examples of how the people try to reward good behavior and dampen negative behavior. If you are a dog LOVER, you will love this book and want to get a second job so you can send them lots of money every month to keep Dog Town going!
Copyright © 2020 Thriftbooks.com Terms of Use | Privacy Policy | Do Not Sell My Personal Information | Accessibility Statement
ThriftBooks® and the ThriftBooks® logo are registered trademarks of Thrift Books Global, LLC