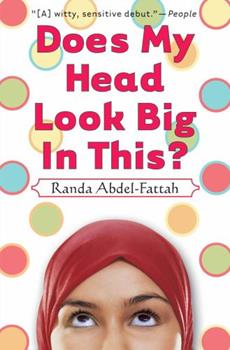 Does My Head Look Big in This?

When sixteen-year-old Amal decides to wear the hijab full-time, her entire world changes, all because of a piece of cloth... Sixteen-year-old Amal makes the decision to start wearing the hijab full-time and everyone has a reaction. Her parents, her teachers, her friends, people on the street. But she stands by her decision to embrace her faith and all that it is, even if it does make her a little different from everyone else. Can she handle the taunts...

Def for a young audience.

Published by Purple , 8 months ago
After 40 pages of reading I had to put this book down. The book is talking about very realistic issues: Wearing hijab and combating the judgments and negativity from the students at her super preppy rich school and the people around her. Unfortunately it’s not really a story that intrigued me...I think if I was a young girl in middle school I would’ve loved this. But as a 22 year old, it’s not for me.

Published by Thriftbooks.com User , 13 years ago
I thought this was a great book! I know there was a review above that stated that the author was just trying to prove that the hijab is just a piece of material and compared it to saying the cross is just like two sticks. I disagree. I believe that the author was only trying to say that Amal shouldn't be judged negatively because of a piece of material but she wasn't minimizing the importance of the hijab and the deep connection and faithfulness Amal felt with wearing it. I believe Amal is changed by wearing the hijab. She not only makes the strong decision to become a "full timer" and changes her outward appearance but I also saw an inward change as well. She realizes her strong relationship with God and strengthens her spirituality. Amal prays five times a day during school, stays strong during the tough Ramadan, endures much criticism due to the hijab, and stays true to her principles throughout the novel, especially not giving in to her crush on Adam. I also appreciated the relatable characters in the story. Her friends all had their own story and problems which made it relatable to many readers. I loved Amal's mothers constant kindness despite the cruelty of Mrs. Vaselli. I was touched by the profound impact Amal ended up having on Mrs. Vaselli's life. Amal really began to understand all the pain behind the woman's mean nature and helped her to overcome her struggles and ultimately, find some happiness again. We learned in my Arab Women's Literature class that Amal means hope and I truly believe that hope is what she gave to this old, stubborn, Christian woman. I also enjoyed the comedy in the book immensely. I believe that the author utilized a comedic nature throughout the novel to keep our interest. Amal was funny yet she kept a serious purpose. She was relatable and respectable. As a non-muslim young woman, I feel I learned a lot about her culture and religion. You could see throughout the story the difference between the true religion and a misinterpreted culture as well. Leila's mother was from an old village in Egypt and was stuck in what she believed were the traditional ways. Amal clearly states that Leila's mother could not even read the Qu'ran for herself. Similarly, Amal shows great disgust for the terrorists who are referred to as Muslims when they apparently do not demonstrate any of the teachings of her religion. Overall, I think it's clear that I thoroughly enjoyed this novel and the many insights it had to offer. I would recommend it to many. :-)

Published by Thriftbooks.com User , 13 years ago
Does My Head Look Big in This? is one of the best books I have ever read in my entire life. The author does a wonderful job of making one young woman's voice loud, clear, and interesting. Throughout the entire novel, Amal is certain of who she is and what she believes in; she does not let anyone persuade her to change her mind about wearing the hijab. There is no indication that the hijab is simply a piece of material. Rather, the hijab allows Amal to grow so much as a person and deepen her faith. Although this novel is about a Muslim girl, anyone can relate to it. The other characters in the novel, from all walks of life, are very much the same as Amal and all deal with difficult situations. I feel that I have learned more about the culture and religion, and the distinctions between the two. It is very evident that Leila's mother goes by what was done in her village and not textbook Islam. Likewise, Mrs. Vaselli takes what she has learned from her little town in Greece and does not behave in a manner that true Christians do. There are people like Tia, Claire, and Rita in almost every high school. It is very unfortunate, but it is true. Therefore, I think that many girls can relate to how it feels to have people make fun of you and say mean comments about you to your face and behind your back. Comedy is a great method to use when dealing with those in marginalized groups. I do not feel as if the author made this book into a joke at all; however, she did allow readers to become interested and engaged in it because of the comedy used. Whenever a person can smile or laugh, tension is reduced. Above all, this novel is inspiring, encouraging, and interesting. If you are a boy, girl, teenager, man, woman, Muslim, Christian, Jehovah Witness, American, Austrailian, or Arab, you will truly enjoy this book. In other words, all people will enjoy Does My Head Look Big in This? because the author is very skillful and presents a powerful and moving argument in the form of a story.

Published by Thriftbooks.com User , 13 years ago
This book is beautifully written and made me laugh out loud more times than I can count. I'm not a "young adult" nor do I generarlly read "young adult" books, but this book blew me away. Call it what you want--it's good writing, ten times better than most "old adult" (yes, I made up a genre) books I've read. I would recommend it to anyone--old or young, Muslim or not, male or female. I absolutely loved it!

Published by Thriftbooks.com User , 14 years ago
Oh...I loved this book. I absolutely loved this book. It was on a topic that needed to be written about, at least in the YA genre, for quite a long time and I am so glad that it was this brand-spankin' new author that decided to take on the task. In Does My Head Look Big in This, by Australian author Randa Abdel-Fatthah, Amal, a typical 11th grade girl, is struggling with a very personal decision. Being a Muslim of strong faith, Amal wants to wear her hajib head covering all the time. No, her parents are not forcing her, in fact, they are almost wary of her doing so, this is completely Amal's choice. When she does decide to go forth with her plan to wear the hajib everywhere, except in the company of family, she knows she is setting herself up for prejudice. The headmaster at her private school is not too keen on Amal messing up the uniform system with the hajib, Tia, a snotty girl in Amal's class is set on making her feel like a loser, and Adam, the one boy Amal has had a crush on, seems to like her back, but also is somewhat uncomfortable with the whole religion thing. Amal stands by the decision she made to wear her faith, quite literally, on her body. She stands up to people that scorn her and when upset, only lets it show to her closest friends and family. This is an incredibly powerful book that is perfect for teens, no matter what they believe in terms of religion. The strength of Amal is beautiful and she is a great role model for teenage girls, struggling to stand up for themselves in a world of peer pressure and designer clothing trends. This is one of the best teen novels I have read this year and definitely look forward to more works by this author. The character of Amal is exactly who I wish I could have been in high school. I was able to stand up for myself to some extent, but I cared way too much what others thought about my appearance and my personality. I would certainly recommend this book be read by adults and teens everywhere.

Published by Thriftbooks.com User , 14 years ago
Let me start out by saying that DOES MY HEAD LOOK BIG IN THIS? is a book that needed to be written, and one that needs to be read. It definitely fills a gap in young adult literature: it's a story about a normal Muslim girl in a non-Muslim country (Australia) who is not escaping oppression by a fundamentalist government/family or anything like that. Amal is just a normal teenage girl, albeit a Muslim one. She has crushes on boys, she likes to go shopping, she giggles with her friends, and she sometimes argues with her parents or feuds with classmates. However, Amal's life is changed drastically when she makes a major decision: to wear the hijab, the head scarf worn by Muslim women. This would not be nearly such a big deal were she still at school with all of her friends who are also Muslim and some of whom wear the hijab full-time (meaning: whenever she is around men who are not relatives) as well. However, Amal has recently transferred to a very white-bread prep school, where the environment is completely different. Amal is subjected to racism and discrimination by kids whose experience with Muslims has largely been confined to what they see in the media. The reactions she faces at home are not all positive, either, but Amal has made a choice. To her, it is a personal, religious decision, to show her devotion to God; it's not about being oppressed as some of her classmates seem to think, or making any sort of statement. Being a Muslim is a part of who Amal is, but in showing that, she faces things a lot worse than any evangelical Christian I know, and that's a sad commentary on our society. All of that aside, Randa Abdel-Fattah's book is very well-written, and I loved Amal's voice. The characters in this book (particularly Amal) were great. DOES MY HEAD LOOK BIG IN THIS? is actually a little reminiscent of the wonderful Looking for Alibrandi by Melina Marchetta, and that's high praise, indeed! The main characters feel similarly different from their peers, are both Australian, and even have sort of similar voices. This book is more than worth reading; it's a must-read! Reviewed by: Jocelyn Pearce
Copyright © 2020 Thriftbooks.com Terms of Use | Privacy Policy | Do Not Sell My Personal Information | Accessibility Statement
ThriftBooks® and the ThriftBooks® logo are registered trademarks of Thrift Books Global, LLC