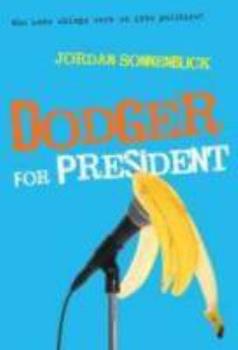 (Book #2 in the Dodger and Me Series)

In this second installment of Jordan Sonnenblick's Dodger and Me series, the humor runs high, the friendships run deep, and Dodger continues to run on French fries and good intentions. What would you do if your best friend was: 1. Still imaginary (and still an oversize blue chimp with major junk-food issues)? 2. Nominating you to run for class president - against the most popular kid in your grade? 3. In charge of your campaign posters...all blue,...

Published by Thriftbooks.com User , 12 years ago
DODGER FOR PRESIDENT is the entertaining sequel to DODGER AND ME. Willie, Lizzie, Dodger, and Willie's new and improved parents continue their antics in this chapter of the story. The problems start when Dodger goes to school disguised as Willie while Willie is on a trip with his father. When Willie comes home, he finds out that Dodger has caused all kinds of problems, not the least of which is getting him nominated for class president. Willie, of course, immediately decides that he cannot compete in this election. He changes his mind, however, because James, one of the most popular boys in class and his competition, makes a nasty comment about Lizzie. After confirming his nomination, the game begins. Campaign posters appearing for James and his running mate make both Willie and Lizzie look like complete geeks, so Dodger strikes back with his own set of posters - but Dodger's camera, like Dodger, is blue. It only takes blue pictures. Fortunately, Lizzie is smart enough to turn this to their advantage. The hilarity continues as Dodger pulls in brother Rodger to help write speeches, gives Willie an X-shaped bruise in the middle of his forehead, and provides much sage advice to the candidates. Meanwhile, Willie's little sister, Amy, has become a Sherlock Holmes clone. Her constant interruptions as she searches for clues about nothing in particular provide a humorous side plot. As the competition progresses, the idea that friends are more important than image is reinforced. Willie also learns that popularity does not mean that either James or Craig has everything they want or need. The value of his own loving, stable family is reinforced as he overhears the boys talking about why they need to win. Like the first book in the series, DODGER FOR PRESIDENT is definitely worth reading! Reviewed by: Theresa L. Stowell
Copyright © 2020 Thriftbooks.com Terms of Use | Privacy Policy | Do Not Sell My Personal Information | Accessibility Statement
ThriftBooks® and the ThriftBooks® logo are registered trademarks of Thrift Books Global, LLC