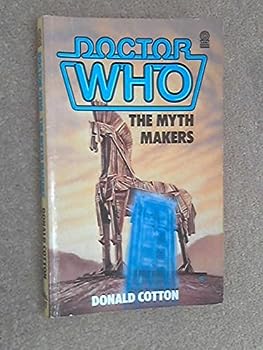 Doctor Who: The Myth Makers

Whent the Tardis lands in Asia Minor, not far from the city of Troy, the Doctor is introduced to Agamemnon and Odysseus and is forced to admit his less than God-like status. He is then given just two... This description may be from another edition of this product.

Homer and Doctor Who

Published by Thriftbooks.com User , 16 years ago
A most unusual Doctor Who. The Doctor is not the main character and he does not even save the world. This is a story about the Doctor's roll in the siege of Troy by the Greeks. It is told by Homer, who says that this is as it really happened, rather than what he wrote in the Iliad. It has all the same characters (Odysseus, Paris, Achilles, Helen, etc) as the epic poem. We also get the inside scoop on where the idea for the Trojan Horse came from. The Doctor is joined by Steven and Vicki in this one. They miss their targeted time for a trip to Earth and instead arrive 10 years into the siege of Troy. This is not the typical serious Doctor Who story, but rather a bit tongue in cheek and most entertaining.

Published by Thriftbooks.com User , 20 years ago
This is a rare step towards comedy in early Doctor Who and it works. The actors are all on top form including William Hartnell as the Doctor. Mark Ayres has done a wonderful job in restoring these lost television soundtracks. The narration read by Peter Purves is also very well done.

Published by Thriftbooks.com User , 22 years ago
Sadly, most of the target Doctor Who novelizations are by the numbers affairs. Not very well written and very bare bones. But, in regards to the three seasons of Doctor Who episodes that were destroyed by the BBC, they are our best and only way to experience the missing adventures. Happily, The Mythmakers is an exception. A humorous tale of the Doctor and the Trojan War: Cotton has chosen to have the story be narrated by Homer and a funny fellow he is to. While being instructive historically, The Mythmakers is very clever and witty. Cotton is sending up the Iliad but, in a way that requires some knowledge on the reader's part of history rather than the Bill and Ted method that requires nothing at all. The characterizations are very good with Odysseus, Paris and, of course Homer getting some choice dialogue though no character is shorted. The regulars are handled well with Steven Taylor being particularly a revelation. What a good companion he was. Cotton also skewers poor Vicki mercilessly and, though she doesn't really deserve it, it is hysterical. In fact, even without the Doctor Who connection, The Mythmakers is one of the best and certainly the funniest books I've read this year. If only the other writers had been so ambitious in their novelizations.
Copyright © 2022 Thriftbooks.com Terms of Use | Privacy Policy | Do Not Sell My Personal Information | Accessibility Statement
ThriftBooks® and the ThriftBooks® logo are registered trademarks of Thrift Books Global, LLC