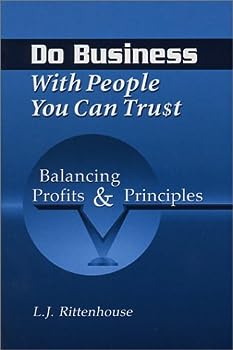 Do Business with People You Can Trust: Balancing Profits and Principles

At time when investors are wondering who to trust, L.J. Rittenhouse has written the first-ever guide to identifying trustworthy business leadership. She examines the letters that CEOs write in their... This description may be from another edition of this product.

A European perspective on a US problem

Published by Thriftbooks.com User , 19 years ago
Laura Rittenhouse has done us all a great favour in her book "Do Business with People you can Trust". It should be required reading for all CEO's and corporate communicators. At last we can see the propects for creating shareholder value by full and honest disclosure and she has created a useful technique for assessing the value (or lack of it)implicit in the shareholder letters published by CEOs.All those who have had the uneviable task of writing reports or letters to shareholders know the temptations of the fashionable phrase or the piece of internal jargon. They are easy to write and get the job done - but we should all learn to stand back and ask "exactly what does that mean?"Disclosure requirements are increasing in all countries but no amount of rules or legislation will prevent the use of meaningless phrases or words. The author helps us understand what works and what doesn't.I only have two suggestions for improvement. First, I think we are benefiting here in the UK from additional disclosures about risk management and many companies are now reporting on the major risks they are taking and how they manage them. More on that would have been helpful. Second, She has focused on the "goodies" strongly represented by Berkshire Hathaway, and the "baddies" represented by Enron. The emphasis on these two companies is heavy and I would have preferred something a little more balanced. Other than that I enjoyed the book immensely, it is well and intelligently written with a mischievous sense of humour. I hope Ms Rittenhouse will persevere with her theme and continue her analysis for an update in a year or so.

Published by Thriftbooks.com User , 19 years ago
The arrogance, greed, and disregard for shareholders so openly displayed recently by a few corporate managers has a negativeimpact on the public's faith in what is still the best economic system in the world. Such behavior, if tolerated, can become verydamaging to our system over the long term. It must be reined in at some point and "Doing Business with People You Can Trust" is ameaningful step in that direction and puts one more nail in their coffin. Everyone who is serious about investing should read thisbook! Several very respected persons in the investment world such as John Bogle, Warren Buffett, Benjamin Graham and a few othershave hammered away for years, both in their speeches and writings, about the very subject of this book. Ms. Rittenhouse hasperformed a Yeoman's service bringing to the forefront, clearly and concisely, a subject that has been an irritant to the ethicalinvestment community for years. Many respected individuals like those mentioned above, Philip Fisher, and others have consistently attacked the subject ofdishonesty, lack of concern for shareholders, and the incompetence of management, at various times. This may be the first volumethat has been written entirely on the subject, however, and that alone makes it the worthwhile work that it is. I sincerely hope thatthe investing public will take the subject of writing to heart and demand a better accounting from corporate management from now onthan they did during the "bubble" years of the '90's.

A fascinating new approach to doing Business with principles

Published by Thriftbooks.com User , 19 years ago
Drawing on examples from extreme ends of ethical spectrum in todays's bussiness world--Berkshire Hathaways and Enron--Ms. Rittenhouse puts forth a compelling argument about the benefits of remaining principled in one's business dealings.Thanks to this book, I no longer believe that good CEOs must live in an ethical gray area in order to turn a profit in today's business world. This book should be the basis for a complete reevaluation of current accepted business practices. The author also illustrates how an average person can thoughtfully gauge the ethics of a company through careful analysis of its annual report.Bravo Ms. Rittenhouse!

Not only "Why," but "How" to Evaluate CEO's letters

Published by Thriftbooks.com User , 19 years ago
This book is unique in that it explains to the reader not only "why" it is valuable to read a CEO's letter to shareholders, but also "how" to evaluate the content, efficiency and impact of these letters using Rittenhouse's "Language Works for Business" scoring model. A useful "scorecard" format is also provided for the reader's use. The explanations of crucial financial concepts such as price/earnings ratio and cash flow are accurate and understandable, without the jargon typical of business books. The review of the many different guises under which "earnings" masqueraded in recent Enron annual reports was particularly interesting. The book is chockful of real life examples from many large public companies to illustrate the author's premise that these letters do provide useful and reliable cues about the values and strategy of the companies, if one only knows the key telltale signs that separate fact from fiction.This reader found interesting the author's statistical study that tested the correlation of the CEO letter scores to the company's stock price performance. The average per cent stock price change for the 15 top ranked versus the 15 bottom ranked companies was tracked over three two-year periods. The author states, "For example, in the year 2000, the top 15 ranked companies increased an average of 7.4 percent from the beginning of 2000 to the beginning of 2002. Conversely, the prices of the 15 bottom-ranked companies declined 19.3 percent during this same two-year period."In short, this book is interesting, well-written and useful to the investor and anyone concerned with investor relations.

Published by Thriftbooks.com User , 20 years ago
I've read dozens of investment books over the last couple of years, and this is clearly one of the best. It provides a very useful and simple method of improving the quality of the single stocks I buy, and is also a good quick read. I can't recommend it enough, you'll never ignore your annual reports again!A better name for the book would be "How to find a CEO you can trust". The book focuses on helping shareholders analyze the trustworthiness of their CEO. It is more than just general business principles.Rittenhouse's basic thesis is that it's best to invest in firms where the CEO can clearly and forthrightly explain what's going on and demonstrates his knowledge of the business. Throughout her book, she gives details on how to analyze the CEO's shareholder letter. (How many people don't know there's one in every annual report?). She uses great concrete examples of good letters (many from Warren Buffet) and bad ones (several from Enron) to prove her points and further explain them. It's very well written, and reasonably short.Her ideas are critical for individual investors to use. Unlike portfolio managers running mutual funds who limit their viewpoint to the next quarter, we can be more patient. Hence it's particularly important for us to invest in firms for the long haul, and that demands having someone in charge that knows what he's doing, and can effectively communicate it. If a business can't be made understandable to the shareholders, can we assume the CEO understands it? And if he can't communicate it to us, how does he communicate it to the people who work for him? I've worked on Wall Street for 15 years, and I must admit that the only shareholder letter I read every year was from the CEO where I worked. In that case, this book is also very important, as it provides a way to analyze it and compare the one (or few) annual reports you read against the hundreds that Rittenhouse reads. After a dozen chapters explaining particular points to look for, Rittenhouse presents a one page score card, which can be used when judging annual reports. It's really easy to use and I very much look forward to using it on the stack I've accumulated. I found the juxtaposition of Enron's letters with Berkshire Hathaway particularly useful. It helps to demonstrate the central point of the book: If the CEO can explain in clear language how the business is run, it's a good sign. If they can't perhaps it's cause they don't know or would simply rather you not know what's going on.Thanks to the author for sharing her easy to use recipe for finding firms with good caretakers. As Warren Buffet said, she is really doing the work of angels.
Trustpilot
Copyright © 2022 Thriftbooks.com Terms of Use | Privacy Policy | Do Not Sell My Personal Information | Accessibility Statement
ThriftBooks® and the ThriftBooks® logo are registered trademarks of Thrift Books Global, LLC