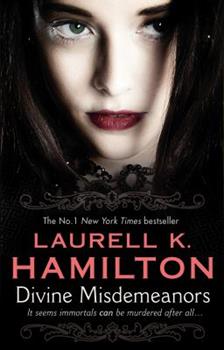 (Book #8 in the Merry Gentry Series)

This description may be from another edition of this product. You may know me best as Meredith Nic Essus, princess of faerie. Or perhaps as Merry Gentry, Los Angeles private eye. To protect my unborn children, I have turned my back on the crown, choosing exile...

Published by Thriftbooks.com User , 11 years ago
not my favorite of the series, but still kicks ass!!! im sooooooo on edge waiting for the next ones! not recommended if youre shy in the love scenes. . . but i LOVE LOVE and this is my favirote series ever!

Published by Thriftbooks.com User , 11 years ago
Huge fan of Meredith Gentry and the series just gets more and more interesting as it goes. A must read!

Published by Thriftbooks.com User , 11 years ago
Divine Misdemeanors (2009) is the eighth Fantasy novel in the Meredith Gentry series, following Swallowing Darkness. In the previous volume, Merry and her bodyguards were fleeing the slaugh in an Army convoy. They encountered Prince Cel in the middle of the road, claiming that he would protect Merry now that she is pregnant. Nobody believed Cel and the humvees tried to bypass Cel's party. But illusions and other magics brought the soldiers out of the vehicles and then hurt them. Since Cel was killing her people, Merry finally took him out. In this novel, Meredith Gentry is half-sidhe, a quarter brownie, and a quarter human. Merry is the daughter of Essus -- the brother of the current Queen of Air and Darkness -- and is a princess in the Unseelie Court. She had been offered the Unseelie crown, but declined for the love of Frost and for her unborn babies. Doyle is part sidhe and one of Merry's bodyguards. He is the one whom Merry loves the most among the fey. Frost is a minor fey who became more after he gained a wife and child. Now he seems fully sidhe and is only second to Doyle in Merry's love and the bodyguard hierarchy. Rhys is a full-blooded sidhe and a former god of death. He is third in the bodyguard chain of command. Barinthus is a full-blooded sidhe and a former god of the sea. He has been living in the beach house since release from the Queen's service. Lucy Tate is a police detective who has worked with Merry on other cases. Bittersweet is a demi-fey with wings. She is a flower fey who is bound to a particular type of floral plant. Gilda is the fairy godmother of Los Angeles. She has magic, but is not as powerful as Merry. Gilda is not very friendly with the Princess. In this story, Merry is called in by the police to advise on a killing of the demi-fey. The small fey had been dressed in traditional clothes to match an old illustration and posed with cut flowers. They had all died with slit throats. After Merry, Doyle and Frost leave the crime scene, they visit the Fael Tea Shop to warn other demi-fey of the danger. But someone else has arrived before them. Bittersweet had seen the killers leave the circle and is now being hysterical in the backroom. Merry calls Lucy and the detective sends two street cops to protect the witness. They arrive soon after the call and Bittersweet has a hissy fit. Merry calms her down and then Lucy arrives. Bittersweet vaguely describes the killers, but Lucy cannot get much out of her comments. Then the demi-fey becomes agitated again. At the appearance of Gilda, Bittersweet hides in her hair. The police try to hold back Gilda's followers and a magic wand is used. In the confusion, Merry is hustled out of the shop and down the street. Then the paparazzi find them, so Merry and her bodyguards duck into a deli catering to fey. The owner's wife turns out to be a relative of Merry's brownie grandmother. They have a nice cup of tea while the photographers and reporters crowd

Published by Thriftbooks.com User , 11 years ago
Laurell's books are excellent. I can't put them down when I start one. She can't wrte fast enough. I love the stories and the romance and of course the "SEX". Who couldn't. Laurell keep writting...LOL

Published by Thriftbooks.com User , 11 years ago
There was a scene in the middle of the book where Barinthus and Merry were arguing that was absolutely amazing. The dialogue, descriptions, everything was working perfectly to create unbelievable edge-of-your-seat tension. That few pages alone showcases exactly why Laurell K. Hamilton's fans are as rabidly devoted as they are. Plain and simple, Hamilton can write emotionally charged suspense with the best of them. There was a decent amount of sex, but Divine Misdemeanors isn't as overly sex-filled as some of the other Meredith Gentry novels. This book is just a small part of the grand scheme of things in the fae world Hamilton has created. Nothing extreme changes in the series storyline, but small things that hint at the consequences of the faeries being back in L.A are scattered throughout the novel. Divine Misdemeanors was a fantastic suspenseful mystery. Just about anything could happen to Merry and her men and I can't wait to see where Hamilton leads Merry next.
Copyright © 2020 Thriftbooks.com Terms of Use | Privacy Policy | Do Not Sell My Personal Information | Accessibility Statement
ThriftBooks® and the ThriftBooks® logo are registered trademarks of Thrift Books Global, LLC