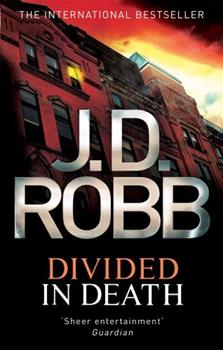 This description may be from another edition of this product. #1 New York Times bestselling author J. D. Robb continues her "sexy and suspenseful" ( Publishers Weekly ) In Death series in this futuristic thriller in which technology and humanity collide--and a...

The Quality We've Come to Expect From J.D. Robb...

Published by Thriftbooks.com User , 17 years ago
The basic storyline of the book centers around a government agency called the HSO (Homeland Security Organization) and Eve's battle with the agency, which instead of destroying terrorists, has become a government-sponsored terrorist group itself. More as it becomes clear that the agency was aware of and ignored Eve's horrible childhood, a conflict arises between Roarke and Eve. Roarke will be forced to make a choice...go after those who allowed his beloved Eve to suffer or do nothing in order not to cause Eve still more pain. Essentially this book is good in two ways...It provides an excellent mystery as well as allowing for the tension and development and, in the end, the testing of Eve and Roarke's marriage. For oldtimers to the series, this is one of the best, and I definately recommend it. For newcomers, this isn't a bad book to start with, though I'd suggest starting with the first book, Naked In Death, and working your way up to it. But regardless, enjoy the book. Escape into the future and like me, fantasize that you too are married to Roarke.

My favorite so far

Published by Thriftbooks.com User , 17 years ago
Yes, Divided in Death is different from the other books in the series. You have your typical Eve driven investigation of murder with someone she or Roarke knows and need to prove innocent. You've got your people who misunderstand Eve's ways which hurts her but she remains silent. McNab, Peabody, Mavis, Feeney and Trueheart are all there, which makes for a nice continuity. This time we've got spies and government intrigue at the heart of the murder case. But Divided is more personal than the other books. Eve and Roarke have always had heated arguments but have been solid with their marriage because of their love for each other. This time, they each struggle with something inherent to their make up and it's not so easily moved past. A great part of the book, contrasted with the others, Eve and Roarke cannot find their way to each other, they are estranged by their different reactions to some information that comes to light about Eve's past. It's this struggle which makes the heart of the book so compelling because you want them to make it, they are the other half of the other but at the same time, some things can't just be moved past. I won't give spoilers but I found this intensely personal approach a nice refreshing change from the other books and I thought Robb wrote it well and threaded it into the mystery in such a way that you don't get bored with one or the other. There were a few scenes in the book where I must admit I did get a bit weepy. Eve, without Roarke's strength, without his love and support is very empty and sad and it reminds you of who she was in Naked In Death and how far she's come. A very worthy read for those who've followed the series and the growth of the characters and the marriage between these two unlikely lovers.

I REALLY liked this one!

Published by Thriftbooks.com User , 17 years ago
This, to me, is J.D. Robb better than ever. Finally, she writes a mystery in which Roarke's involvement is intrinsic to the plot - he's not just shoving his way into Eve's job. Their conflict was so well-drawn and realistic, it amazed me. I was very impressed with its resolution, in how far Eve and Roarke have come to understand each other. I do have to disagree with the reviewer who said that Eve's response "emasculated" Roarke - she was the wounded party, it's for her to decide if and how she wants to retaliate. If he just jumped in, he would take away her power even more. On a side note, it's a real pleasure to read about people with childhood issues who have to continue to work through them - so often, True Love comes along, and that's just the end of it. The mystery was good and entertaining, with several amusing, well-placed, political "slams." It's also delightful to see Peabody as a detective and to get a closer look at Caro. I am looking forward to Visions in Death and to when this comes out in paperback.

Published by Thriftbooks.com User , 17 years ago
Lieutenant Eve Dallas survived a horrificly abusive childhood, experiencing firsthand how the ponderous indifference of the system can strip the victim powerless. Eve is a homicide cop, standing up for murder victims by her courage, determination and compassion within the system.Roarke clawed his way out of his childhood of poverty and beatings by brilliance, boldness and sheer determination. He has amassed immense personal wealth and power coupled with an unwavering loyalty to those few he loves, and many who are linked to him by friendship or responsibility. Roarke balances the scales of justice by whatever means suits his purpose, utilizing or evading the law as he deems fit.Eve's painful past is being used against her by a covert Homeland Security governmental organization. Threats to make her private ordeal public have driven Eve and Roarke to opposing stands. Roarke burns to apply searing retribution to those who knew but ignored Eve's torture at the time, and their successors who kill and threaten with impunity in the present to further their rogue operations. Eve is equally driven to use the system to enact justice. For her, going outside the law would be to herself join the jackals and the victimizers, a betrayal of all she believes.Divided in Death opens the door a bit wider on the unfolding histories and relationship of Eve and Roarke and their passionate, intense, not always comfortable love and marriage. As always, the supporting cast of friends and peers are woven into the larger story, including an opportunity to clear up an apparent discrepancy from previous novels regarding Dr. Mira, the police psychologist and profiler.If this is your first taste of the In Death series, enjoy! You'll want to go back and get to know more levels of this complex, passionate pair as well.

Published by Thriftbooks.com User , 17 years ago
Well, the book jacket description is completely exaggerated - not unusual. Forget the Doomsday group - the murders here and all the problems stem from the cold and somewhat corrupt Homeland Security Organization [HSO], which conducts its investigations as it pleases in a devious and not at all kind manner. With the vicious and bloody deaths of the husband and friend of one of Roarke's employees, Eve is led to believe that the computer systems were part of the reason why. Hence, lots of electronic and HSO stuff (HSO stuff which the author evidently despises).This first In Death hardcover is not a bad one - in fact, the mystery was impossible to decipher, though that may be because of all the random possibilities that erupted. Most interesting here is likely the disturbing discovery that Roarke makes about Eve's past - just as Portrait in Death revealed an enormous secret about Roarke's life, Divided is the book in which some very, very nasty things are discovered about a past that Eve would prefer to keep buried, and that alone makes it worth reading.The dialogue in this book is once again sharp and amusing, including a fascinating dialogue between Eve and Roarke where she talks about what she'll do if he dies (that is, if he dies having cheated on her). Verry amusing.I'd say the best part of this novel is most likely the characters, once again - Mavis is bouncing with pregnancy (my guess is she'll give birth within the next two or three books), Peabody and McNab are a constant crack up, and the candy thief strikes again.The conflict between Eve and Roarke in this book is an unusual one. I won't go into much detail, but it has everything to do with the dirty secrets in Eve's past, and it's a very uncomfortable feeling that they have with each other. This and the mystery plot drive the story, and sometimes, for the briefest of moments, the novel loses its momentum. But it successfully regains it, and though the ending (action) is a bit anticlimatic, it's an enjoyable J.D. Robb and a good transition from paperback to hardcover.
Copyright © 2020 Thriftbooks.com Terms of Use | Privacy Policy | Do Not Sell My Personal Information | Accessibility Statement
ThriftBooks® and the ThriftBooks® logo are registered trademarks of Thrift Books Global, LLC