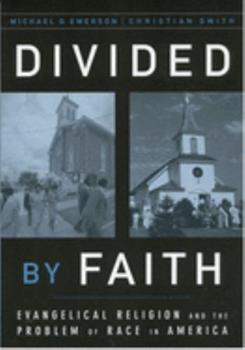 Divided by Faith: Evangelical Religion and the Problem of Race in America

Through a nationwide telephone survey of 2,000 people and an additional 200 face-to-face interviews, Michael O. Emerson and Christian Smith probed the grassroots of white evangelical America. They found that despite recent efforts by the movement's leaders to address the problem of racial discrimination, evangelicals themselves seem to be preserving America's racial chasm. In fact, most white evangelicals see no systematic discrimination against blacks...

Published by Alina Anderson , 8 months ago
There is a lot of writing in it for being in great condition

Fascinating look at religion and race

Published by Thriftbooks.com User , 17 years ago
Summary:The book is based on the first author's doctoral dissertation and follows that format... It presents the problem, namely that white evangelical Christians have a long-standing relationship with race in America and that America remains racialized (a term explained in the book). Given the recent trend among white evangelicals to do `something' about the race problem, Emerson and Smith are interested in two things: (1) How do white evangelicals really feel about race and racism in America? (2) What are white evangelicals really doing about it, if anything? The authors then employ a number of methods to answer this question, including analyzing survey data and conducting extensive interviews with hundreds of white evangelicals. These data are presented in the middle few chapters of the book. The conclusion is best summarized by the authors, "Despite devoting consid­erable time and energy to solving the problem of racial division, white evangelicalism likely does more to perpetuate the racialized society than to reduce it" (p. 170). Comments:Before I offer some criticisms of the book, let me begin by saying that this is an excellent text. It is clearly written and presents a persuasive argument (though the argument isn't without its problems). The authors have done their best to minimize sociological jargon and, when it isn't possible to avoid it, they clearly define the terms they use. The authors also employ a variety of theoretical constructs (the cultural tool kit is probably the clearest), simplified for an educated lay-audience, based in the current literature on the sociology of religion. The result is an easy to read book that clearly illustrates a social problem - white evangelicals talk the talk, but don't really walk the walk that will transform a racialized America into a society where race `doesn't matter'. A minor criticism to begin with... The authors don't mention that they are evangelical Christians. Given the current trend in the sociology of religion to reveal one's personal religious persuasion so as to inform the reader of any biases that might stem from this, not revealing this fact is an unfortunate oversight. However, I'm inclined to not be concerned about this oversight in this book considering how critical the authors are of their own. This book does not speak highly of the efforts of white evangelicals to reduce the racialization prevalent in America. If the book had been laudatory in light of the evidence, the religious affiliations of the authors would have been suspect. The other problems I have with the text are a bit bigger in scope, but also would require that the authors delve into issues for which they don't really have adequate data. First, white evangelicals aren't wholly to blame for the racial problems in America today. The authors don't claim they are exclusively to blame for this, but at times one might get that impression. Additional analysis and discussion looking at the roots of raci

Published by Thriftbooks.com User , 18 years ago
Michael Emerson and Christian Smith argue in their book Divided By Faith that the values and beliefs that are central to evangelical religion - freewill individualism, relationalism, and antistructuralism - actually help to increase the racial divide in America, even though they are the biggest supporters of racial reconciliation. The book is based a deep probing of evangelical Americans' feelings of race issues through an extensive nationwide survey of over 2000 people. The authors give rock-solid proof for their argument which is presented in a very concise and logical manner. The effective use of statistics and quotes from interviews help solidify the argument. In addition, they describe how the structure of American religious organizations is continually pushed towards internal similarity, leading to racially separate congregations. After reading the book, one will find it difficult to respect the views of evangelicals and their attitudes on race issues.The book begins with a close look at just how racialized our society really is, citing mostly examples of economic disparity between whites and blacks. The problem also exists in the lack of interracial marriages, segregated communities, and in religious affiliation choices. Next the authors give a historical overview of how Christians, particularly evangelicals, have thought of race in the past, and what sorts of actions they have taken to address racial issues.Racial reconciliation was started by blacks in the 1960s as a theology for reconciling the division between races. Its primary tenet is that individuals of different races must develop primary relationships with each other and recognizing social structures of inequality. Evangelicals have since popularized the idea and made it one of their top priorities for bringing and end to racial division. The original message was lost in the translation however, for evangelicals stress individual reconciliation as opposed to challenging social systems of injustice and inequality.Evangelicals see the race problem of one of three types: prejudiced individuals, other groups trying to make race problems a group issue when it is only individual problems, and a fabrication of the self-interested. Emerson and Smith use the idea of a cultural tool kit - ideas and practices that shape one's perception of reality - to explain these views. They explain how accountable freewill individualism, relationalism, and antistructuralism are the racially important cultural tools for white evangelicals and how most do not think America is racialized because of their tools; in addition, most are racially isolated. White evangelicals see no race problem other than bad interpersonal relationships. These tools lead them to "minimize the race problem and racial inequality, and thus propose limited solutions." This strong evidence supports the claim that evangelicals perpetuate a racialized society without any intention to do so.The authors asked people in t

Published by Thriftbooks.com User , 19 years ago
Divided by Faith is the best book I've ever read that explains the problem of why White Evangelical Christians have such a difficult time understanding the concerns of African-Americans. As an African-American growing up in the 60's and now a pastor of an inner city church I have spent the past thirty years attempting to understand and communicate the problem of race in America and what the evangelical church should be doing to address this problem. This book has become a tremendous resource for me. Highly recommeded to anyone truly serious about racial reconciliation.

Published by Thriftbooks.com User , 20 years ago
I have to say that being an African-American male with an evangelical upbringing and background, I've found this book to be INCREDIBLY eye-opening. With an almost cold-blooded meticulousness and a vivid eye for detail, Emerson and Smith examine many of the underlying philosophical and theological foundations that shape the attitudes of evangelical White people about race in America.One of the essential tenets of this book is their concept of "racialization" and how it differs in scope and functionality from what we would typically call "racism." If for no other reason, this book should be read just for that section alone. It would help many many people on both sides of the racial divide understand our collective experiences.The risk of gross oversimplification prevents me from going much deeper into their arguments, because part of what makes the book so compelling is the methodical manner in which contemporary ideas are broken down. Absent from this book is any of the sentimentalist grandstanding that some social activists resort to when their work cannot speak for itself.All in all, this book is dope. I'm feelin' it big time.

A great read -- with effective and interesting arguments

Published by Thriftbooks.com User , 20 years ago
Emerson and Smith succeed where few sociologists have, in providing a readable and dynamic account of how well-meaning people unwittingly reinforce racial segregation and inequality. The book is compelling, and quickly and consistently helps the reader understand a basic sociological truth - that individual behaviors can have unintended, even ironic, consequences. In their focus on white evangelical Christians, they suggest that something is "lost in translation" when their leaders prescribe (as they have lately, to their credit) racial reconciliation. That "something" is the idea that there is more to repairing race relations than simply forging individual friendships with African-Americans. It is the individualized "cultural tools" of evangelicals, they argue, that cause them to be very suspicious of solutions to social problems that fail to emphasize the one-on-one relationship and individual "change of heart" that accompany how they think about their beliefs and faith in Christ. Changing people's attitudes one at a time is what will work, evangelicals appear to argue. But above and beyond such cultural trappings, the authors argue effectively that the free market of American religion itself not only breeds religious vitality (as compared to Europe), but also suffers the unintended consequence of further segregating the races. This is a very enlightening point - that the religious market in America leads congregations to become focused on marketing themselves to specific "homogenous" niches in order to survive as organizations in a competitive environment where people simply don't attend the church in their neighborhood anymore. But in so doing, people associate more and more with others who look and act like them, and thus black and whites become further segregated. This is a worthwhile book, and there is more to its credit than I have mentioned here. One would hope that many of the people whom Emerson and Smith write about would read this and reflect critically on their "cultural tools," but I remain pessimistic that cultural tools, of evangelicals, and of any other social group for that matter, can be suspended long enough (and by enough people) to recognize the value of important, alternative ways of thinking about social problems.
Copyright © 2020 Thriftbooks.com Terms of Use | Privacy Policy | Do Not Sell My Personal Information | Accessibility Statement
ThriftBooks® and the ThriftBooks® logo are registered trademarks of Thrift Books Global, LLC