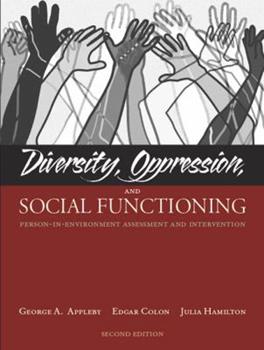 by George A. Appleby and Julia Hamilton

Using the Person-In-Environment (PIE) theoretical framework, this diversity practice text teaches students how to think about their personal reactions and assumptions about diversity and what constitutes cultural competent assessment and intervention when working with a broad range of diverse populations. The diverse populations presented in the text are described within an ecological, strengths perspective. The authors' thesis is that, in order to...

The End of Discrimination Through Education

Published by Thriftbooks.com User , 12 years ago
Normally I don't complain about the text, but this seemed important...While reading Chapter 10 in this text, I was VERY disappointed. Appleby portrays GLBT members as being community organizers who just popped out of the woodwork during the 70's. This is a terrible representation of my GLBT community, especially when all he states about our HISTORY is "despite the gay rights movement" (178) and "since the Stonewall rebellion of 1969, the modern birth date of the Gay Liberation movement..." (192). Where is Matthew Shepard or the Matthew Shepard Act? The Matthew Shepard Act of 2009 was in its beginnings before this text was even written. Brandon Teena? Literature representations? There is so much there, but it is excluded. He even gives a poor representation of gay bashing on page 192, with the 4 year old boy. This is a better representation of homophobia and child abuse resulting from that ideology. Granted, I do understand that the GLBT history is limited because of the heteronormative expectations throughout the last century, but there is still history. Even if it isn't documented, it is there. My older brother did a Queer Oral History Project (A full length documentary) for Salt Lake City, UT and presented it during the GLBT pride events. THIS is a way to get real qualitative data, not foregoing all attempts and settling to describe the many ways I (and the GLBT community) have been discriminated against on an Institutional, Individual, and Structural level. By not being fully and accurately represented to the dominant society, we as gays and lesbians only gain more challenges with discrimination because the dominant groups were not reasonably informed. Appleby presses the fact of social workers being educated on other groups, but it is also the dominant groups' responsibility to be educated as well. Essentially, Appleby missed the boat entirely on this chapter. As a side note, there could have been an expansion on Native Americans and their take on homosexuality. More specifically, "two-spirits" within the Native American culture; these people are often revered as two-spirited individuals and are socially acceptable and protected. Otherwise, the text was adequate within the topics. Appleby did portray himself as female in the Sexism chapter, I noticed!
Trustpilot
Copyright © 2022 Thriftbooks.com Terms of Use | Privacy Policy | Do Not Sell or Share My Personal Information | Accessibility Statement
ThriftBooks® and the ThriftBooks® logo are registered trademarks of Thrift Books Global, LLC