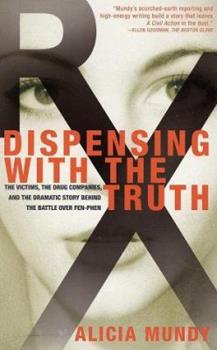 Dispensing with the Truth: The Victims, the Drug Companies, and the Dramatic Story Behind the Battle Over Fen-Phen

In 1996, a terrible epidemic began. Thousands of young women were stricken and many of them died. Some died quickly, within a few months; others lasted a couple of years. Many of those who didn't die suffered damage to their hearts and lungs, much of it permanent. Doctors suspected what the killer was. So did the Food and Drug Administration. The culprit was one-half of the most popular diet drug combination on the market, Fen-Phen. It was produced...

Published by Thriftbooks.com User , 20 years ago
The book discusses several cases of Fen-Phen, the diet drug. The book goes through the history of the drug, the drug companies efforts to conceal the negative side-effects of the drugs. It continues on through the FDA approval process, how the drug companies paid for numerous studies to prove the drugs were safe and wrote articles and paid doctors to publish the articles in the doctor's names. On come the lawyers to protect the injured victims and the ones for the drug companies. The book even covers the power struggles between plaintiffs attorneys fighting among themselves. As an attorney, I am inspired to grow my career into Plaintiff's drug litigation because the problems plaguing Fen-Phen will likely repeat.

This book will make your blood boil!

Published by Thriftbooks.com User , 20 years ago
On a recommendation from the website for the National Association to Advance Fat Acceptance, I purchased this book and was riveted from beginning to end. As a woman who takes medicine for depression, and has a sister who took Redux for two months, I found this book a true shocker and a well-told tale. Alicia Mundy arranges a vast amount of material and lays out a stark and gripping tale of how the FDA - many of whose members are on the drug companies' payrolls - approved Redux despite its proven history of making women (literally) deathly ill. I felt tremendous solidarity with the lawyers prosecuting the case, among them Alex MacDonald, who worked in tandem with his wife, Dr. Maureen MacDonald (a doctor specializing in anesthesia). Because it is a true story, Mundy's book does two things: one, it makes the readers (including myself) far more wary of the FDA and the drugs our doctors prescribe, and two, its story takes twists and turns no fiction book could plausibly get away with. If you take prescription medicine of any kind for any reason, read this book, and remember Mary Linnen the next time you think about buying weight-loss drugs.

Published by Thriftbooks.com User , 21 years ago
This book will make you furious, and it will make you think twice (or three or four times) about the drugs you take, especially ones that have only recently been approved by the FDA. Alicia Mundy tells the story very well and has you on the edge of your seat much of the time. I'm not usually much of a one for stories of victims, lawyers, drug companies, and the FDA, but I couldn't put the book down. It reads like a thriller, and the information it contains is especially vital to anyone who has ever taken Fen-Phen. Even if you would never consider taking a diet drug, you need to learn how ineffectual the FDA has become in the face of the super-powerful drug companies. The drug companies involved knew about the serious health risks associated with these drugs and made every effort not to inform doctors and drug users about the potential dangers. Worse yet, they knew that the drug didn't work. And although they were recommending it for long-term use, they had tested it only for short-term use. This book will make you angry, and given that nearly five times as many people have died from the Fen-Phen debacle as from faulty Firestone tires, we should be angry--angry enough to get Congress to put some teeth back in the FDA so that this sort of tragedy never happens again.

Saucy and outrageous will leave you outraged

Published by Thriftbooks.com User , 21 years ago
Perhaps the most remarkable aspect of this book was the way it made me smile and laugh, in the midst of a story that is frightening and sad. Alicia Mundy is saucy, witty, and an incredible story teller. Reading "Dispensing with the Truth" will cause you to become furious with the drug companies, inspired by the heroic lawyers, and intrigued by the inner workings of the FDA. I felt great disappointment with the drug industry, but at the same time I was hopeful, as the author finds many rays of light. For example, one of the heroes in the book was a med tech in Fargo, North Dakota named Pam Ruff, who pursued a strange coincidence in the echocardiograms of her patients not because she thought she could profit, but because she thought she could help. And then there is the FDA's Leo Lutwak, who risked his reputation and his job to voice his dissent over the approval of the dangerous drugs. I strongly recommend this book if you are looking for a gift for a mother, a sister, a lawyer, or anyone who likes courtroom thrillers.

Published by Thriftbooks.com User , 21 years ago
A great read. Ms Mundy handles vital and complex issues for us with ease. This book is a truely significant contribution to investigative writing. An expose that should not be missed.It has all of the ingredients of a good thriller, gritty, engrossing, with twists and turns right up to the last page.Ms Mundy does great honor to the memory of Mary Linnen.
Trustpilot
Copyright © 2022 Thriftbooks.com Terms of Use | Privacy Policy | Do Not Sell or Share My Personal Information | Accessibility Statement
ThriftBooks® and the ThriftBooks® logo are registered trademarks of Thrift Books Global, LLC