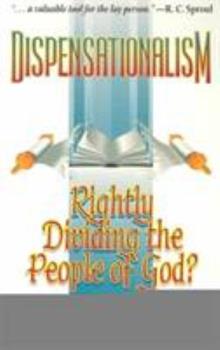 by Keith A. Mathison

my testimonial: how this book changed my thinking

Published by Thriftbooks.com User , 19 years ago
Most of my childhood pastors (and my present one) graduated from Dallas, and I graduated from dispensationalist Moody Bible Institute. But somehow I had never heard a clear presentation of what dispensationalism believed. When I started becoming informed of Reformed theology, I was interested, but I had some questions lingering from my dispensational background. I decided it was most fair to read what dispensationalists themselves said before I read what "the other side" said about them, so I started by skimming through Charles Ryrie's Dispensationalism. Reading Dispensationalism, I was really quite surprised at the false arguments (such as that only dispensationalists care about an accurate interpretation of Scripture because they take it "literally" and other people don't), the clear misinterpretations of Scripture, and the assertion that dispensationalists care more about God's glory than others do (God's glory was what attracted me most to Reformed doctrine--I had been a Christian 25 years and had never seen how "big" God is).Finally I was at a conference at which this book was sold. Although I'd not managed to get through Dispensationalism, I decided to buy this book and read it, and to get back to dispensationalism later. But by the time I finished this book, all my questions about both positions had been answered, with the exception of not going into much detail on end-times issues. Part of what resonated with me, however, is that the focus here is on the Cross, not on end times, which seems to fit better with Scripture. I'm beginning to see that Jews at the time of Christ were surprised because Jesus didn't fit their expectations for a Messiah and to realize we might also be surprised because the end times don't happen exactly as we expect. (Ironically, it seems to me that dispensationalism continues the first-century Jews' mistaken idea of what Jesus was supposed to do when He came!) I don't think prophecy is necessarily supposed to fill in all the details ahead of time--it's supposed to make sense when it has been fulfilled. The thought that somehow Jews who believed in Jesus and Gentile Christians remained separate religious bodies even after the Cross, apparently forever, had continued to bug me, so it was good to see Scripture after Scripture that validated that Christ really has torn down the wall. One point dispensationalists make is that there has to be a future literal Millennium because God has never completely kept His promise to give designated land to Israel. Mathison points out Joshua 21:43-45, which seems to try to use "all" as many times as possible so that this accusation can never be made. (So much for a "literal interpretation of Scripture.") That's just one example of an argument that was absolutely demolished by Scripture as I read this book.Immediately after reading this book I had to do a study project that included detailed reading of a dispensational theology text that is heavily critiqued in this book. I looked u

Published by Thriftbooks.com User , 21 years ago
For those who have never heard that there are Christians who donot believe in a Kingdom offer 7-year pre-tribulational secret rapturenon-Lordship 3.5-calvinism position, this book is for you.Mathison is clear and does not use terminology that only PhD's understand. Yes, there are Christians out there who reject dispensational theology as a modern theological invention that divides God's universal plan into two stages for two different people groups.A very fine point that Mathison makes is not on eschatology...what you believe about God's plan for mankind and what you believe about the Church will determine where you land (dispensational or other). This has nothing to do with "dispensations," it has everything to do with the primary intent of Christ's first advent, the nature of the Church, the doctrines of salvation and God's plan for history.I was hardcore dispy before reading this book...reading the Bible has never been so clear since I left that "theological system." This book will shake the foundations of a dispy theological system. If it doesn't, it will give you some serious matter for consideration.The Scriptures do have a simple message...leave it up to folks to create a system of beliefs that not only divide Christians from fellowship with each other, but emphasizes wall charts of end-times fantasies that cannot be found at all in the Bible. The air is so clear without the confusion of Dispensationalism.This is a great book. Challenge yourself to read Mathison's book and dispute it or join the ranks of those who have left Dispensationalism for the clarity of Scripture.

Published by Thriftbooks.com User , 22 years ago
This a good introduction to the issues surrounding the dispensationalist system of theology. The author focuses primarily upon the relationship between Israel and the church as the focal point of disagreement between dispensationalists and non-dispensationalists.The author's eschatology does depend upon a pre-AD 70 date of writing for the book of Revelation. (Contrary to the reviewer below, it is not a "fact" that it was written in AD 96-97, and therefore the views of the book cannot be so hastily dismissed). The dating of Revelation is heavily disputed, but there is good evidence for the early dating advocated in this book. See Kenneth Gentry's "Before Jerusalem Fell" for an exhaustive scholarly defense of the early date for Revelation.All in all, two thumbs up.

Published by Thriftbooks.com User , 25 years ago
Mr. Mathison discusses the foundational issues that differ between Reformed Theology and Dispensational Theology. His premise is that one's view of the Church and Israel determines whether one will be lead to a Dispensational stance in theological matters. Although this is written in layman's terms, both sides of the discussion will find this work a useful tool in the on-going debate. His work is clear and organized. The layout of the book nicely unfolds to reveal his premise from beginning to end. While disagreeing with some of his conclusions, I cannot recommend a better introduction to this issue.
Trustpilot
Copyright © 2022 Thriftbooks.com Terms of Use | Privacy Policy | Do Not Sell My Personal Information | Accessibility Statement
ThriftBooks® and the ThriftBooks® logo are registered trademarks of Thrift Books Global, LLC