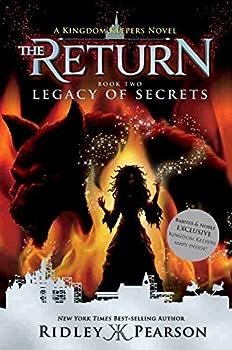 (Book #3 in the Kingdom Keepers: The Return Series)

This description may be from another edition of this product. The Return Trilogy comes to an end with an unexpected and explosive finale. The stakes are high - both for the past and the future. The last book of The Return series leaves the Kingdom Keepers with...

I ordered book 3 in the series and received book 2.

Published by Catharine Claytor , 3 months ago
Why is book 3 so hard to get?

I believed I was ordering Disney At Last, but instead received Legacy of Secrets. I would REALLY lov

Published by Aubrey G , 6 months ago
I received the wrong book

Published by David , 1 year ago
I ordered Disney at Last and recieved Legacy of Secrets
Copyright © 2020 Thriftbooks.com Terms of Use | Privacy Policy | Do Not Sell My Personal Information | Accessibility Statement
ThriftBooks® and the ThriftBooks® logo are registered trademarks of Thrift Books Global, LLC