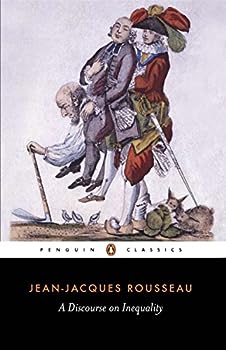 A Discourse on Inequality (Penguin Classics)

If humans are benevolent by nature, how do societies become corrupt? And how do governments founded upon the defense of individual rights degenerate into tyranny? These are the questions addressed by... This description may be from another edition of this product.

A profound examination of the human condition

Published by Thriftbooks.com User , 14 years ago
This is a book I picked up and began reading. It was probably the most interesting book I have ever read. It was my introduction to the Classic texts and remains my favorite.

In the name of Iran

Published by Thriftbooks.com User , 16 years ago
This book was pretext for Karl MARX idea of communism. Rousseau blamed inequality among people due to ownership of property.

Published by Thriftbooks.com User , 19 years ago
This essay was Rousseaus's submission to the Academy of Dijon contest, entitled, "Has the progress of the arts and sciences contributed more to the corruption or purification of morals?". This text is his story about Nature, and Society, and the scandal that happens when people come together, build, divide, dance, sing, and compare themselves with one another. In many ways, it is his answer to the problem of evil. Natural man is, in many ways, good, because his needs are immediately felt and immediately fulfilled. Social man begins to compete, to hoard, and to use cunning to enslave his fellows, to gain their esteem, take their property, and sometimes their lives. His picture of the natural man is half what we think of an "animal" and half the "human" that we recognize in ourselves. He shifts his description as the flow of arguement dictates. The habitual provocateur, Rousseau - watch him! In a way, he is rewriting the Christian "Creation Myth". In his version, evil does not originate at that moment when man eats the fruit of the "Tree of Knowledge of Good and Evil" --to "be like God"; it happens when Adam wants a better apple than Eve's got for herself. Before society develops as we know it, Adam would have been fine with just a pear.

Published by Thriftbooks.com User , 22 years ago
Excellent discourse. This book discusses some of the rudiments of the history of inequality and how its self supporting and ever existing in human nature. I recommend this book for those readers who either want to increase their knowledge on Jean-Jacques Rousseau or historical development of inequalityFor those who want to further their command over Rousseau's life- I suggest them to read 'Confessions' by Rousseau.

The garden of eden

Published by Thriftbooks.com User , 22 years ago
I find Rousseau especially creative in the way he describes how inequality progressed from the time the first humans made contact. He makes a good case for the solitary life. I think Rousseau believes it is destructive whenever humans come together in groups. Governments were formed to protect the weaker from the stronger or as Rousseau thinks to actually protect the rich from the poor. This is an outstanding book. It will haunt you.
Trustpilot
Copyright © 2022 Thriftbooks.com Terms of Use | Privacy Policy | Do Not Sell My Personal Information | Cookie Preferences | Accessibility Statement
ThriftBooks® and the ThriftBooks® logo are registered trademarks of Thrift Books Global, LLC