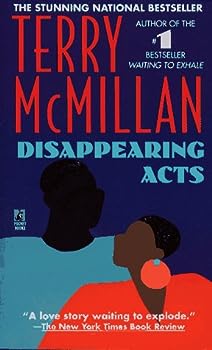 This description may be from another edition of this product. He was tall, dark as bittersweet chocolate, and impossibly gorgeous, with a woman-melting smile. She was pretty and independent, petite and not too skinny, just his type. Franklin Swift was a...

Published by jen , 1 year ago
The movie got me interested in this book. I think this book takes one of the most realistic approaches to displaying a black american relationship in the 20th century. They deal with typical relationship issues, but this shows how systemic road blacks affect black relationships. A bit slow at times, but interesting over all.

The Master Of This Genre!

Published by Thriftbooks.com User , 17 years ago
There are a lot of "Terry McMillan wannabees" out there but she is the ORIGINAL and she's the MASTER of this type of story. Zoe and Franklin, a couple with their own struggles and their many ups and downs, literally jump off of the pages, thanks to the brilliant and totally realistic characters that Terry McMillan creates. Although I liked her other books as well as this one, Disappearing Acts is her best work, as far as I'm concerned.

Published by Thriftbooks.com User , 20 years ago
Lonely, confused, and hardworking man meets lonely, hardworking, dreamer of a woman and they fall in love and live happily ever after is what we are all used to either reading about or seeing on TV, right? Well...wake up and smell the DAMN coffee because we are living in the 21st century and and we are no longer living in "la-la" land. I realized this when I picked up the novel "Disappearing Acts", written by Terry McMillan. She uses humor and realistic topics we all can relate to, such as love, hate, betryal, trust, and friendship to gain and reach out to her captive audiance."Disappearing Acts" is a delightsful story about the union of two very different people, Franklin and Zora. They are like the African-American version of "Frankie and Johnnie". Franklin is a sometimes employed construction worker, high school drop-out but surprisingly educated and well-mannered. He's separated with two sons that barely know who their father is. He seeks meaning in life without women. But he unexpectedly meets a woman who is somehow the answer to all of his problems, Zora. Zora is a young, beautiful, dreamy, and sometimes insecure middle school music teacher who yearns to be the next Whitney Houston Nina Simone. She swears that the only goal she plans to reach is her singing career. When these two beatiful people meet...the chemistry is undeniable. But they both have skeletons in the closet that they are afraid to reveal. This is a story that anyone of any race, ethnicity, or backround can relate to. Terry McMillan is definetly speaking the truth through her words. I suggest that anyone in search of a good book to read..this is definetly the one to pick up.

Best one out of all Terry's books yet

Published by Thriftbooks.com User , 20 years ago
A lot has been said on Disappearing acts, so I'm going to keep mine short and simple. Well this was the first black frictional book I read some years ago. The most interesting thing is that I have re-read it twice since, and every time I have to recommend a book for one of my friends, this is among one of the first books I would recommend (that is if they haven't already read it). This is a fictional story based on the relationship between a boy and a girl. Franklin is a blue-collar worker with a truck full of excess baggage from his previous marriage, and in his own words says he is taking a vacation from all of 'em. Zora is a collage-educated music teacher who is also trying to make a fresh start after a string of bad choices. Well, they meet up and all their resolutions do a "Disappearing act". They go through the roller-coaster ride of boy meet girl, and sometimes it even goes to the extreme, but Terry does not mince with her words. In fact that is what I like about McMillan's writings, she tells it as it is in any given situation. So if you are looking for a good book to read that would keep you up and take you through the motions, then this boy meets girl with a difference is definitely the one for you.

Published by Thriftbooks.com User , 21 years ago
I read this book three times, the first of which was about 9 years ago, the most recent being 3 months ago! I continue to be amazed and impressed with the author's ability to get into a brother's head. She accurately captures the emotions and mind of the male character (Franklin). It's as if she passed the book around to the average brother and had him write a chapter from his own, very real, life! This book constantly reaffirms what I have learned by experience, sisters know a great deal of what goes on inside a brother's head, even when we think they don't! If you're looking for a good book, void of Americanized HYPE and overpublicity, this is it.

I wrote a review previously but it was not posted...

Published by Thriftbooks.com User , 21 years ago
This book was very real in its portrayal of the way women need men in their lives and will allow even extremely dysfunctional men to share their lives out of simple fear of loneliness and sexual needs. As a feminist, I too deplore the way her lover treated Zorah, who should have known better. But shouldn't we all? They used to say that lesbians were on the front lines of the women's movement, but I've always felt straight women were, because they have to share their hearts and beds with the enemy. It's not easy being a woman in a man's world, and sometimes we have to take what we can get if we want the social status that comes with having a man. Also, by the time Zorah realized how destructive Frank could be, she was already in love with him. It's very difficult for a woman to UN-love a man, because women are trained to love unconditionally. Actually, it's a beautiful trait that often gets us in trouble. I happen to think it's great to simply live alone or be without a man - many women can do that. But sometimes a jerk just slips in. McMillan realistically portrays this moment in a woman's life. Also - Frank redeemed himself by apologizing for everything and getting into career and substance abuse recovery in the end. He wasn't a complete scoundrel; just a sef-centered a---h---. Any of you girlfriends out there recognize him?
Copyright © 2020 Thriftbooks.com Terms of Use | Privacy Policy | Do Not Sell My Personal Information | Accessibility Statement
ThriftBooks® and the ThriftBooks® logo are registered trademarks of Thrift Books Global, LLC