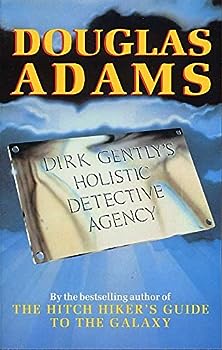 (Book #1 in the Dirk Gently Series)

From Douglas Adams, the legendary author of one of the most beloved science fiction novels of all time, The Hitchhiker's Guide to the Galaxy , comes a wildly inventive novel--in trade paperback for... This description may be from another edition of this product.

There is no such word as "impossible" in my dictionary!

Published by Thriftbooks.com User , 17 years ago
"In fact," says Dirk Gently, "everything between 'herring' and 'marmalade' seems to be missing." Dirk Gently is an example of a breakthrough work: An attempt at something quite artistically new, which is all the more amazing because it actually succeeds. In short, this novel is: a Science Fiction Mystery Comedy. * DG is a quite good Science Fiction book, with elements such as strange alien technology ("The Electric Monk"), time travel, and an immortal -- if VERY absentminded -- being * DG is a quite good (and, to borrow another reviewer's term, "self-consistent") mystery/detective novel, even if the detective in question IS rather unorthodox! * DG is a very funny comedy novel, which parodies not only the detective genre, but also makes not-so-subtle jabs at ivory-tower academics, business executives, British Telecom, and computers (and the geeks that use and program them) Dirk Gently as a character in particular is a truly original creation. It is both very fortunate that we have him in two novels, and cruel and tragic that Douglas Adams did not live to develop him any further. For one example, many of Dirk's college friends think he is psychic, and are always trying to get him to dream-speak upcoming exam questions. Dirk sets out to prove them wrong by creating a complete copy of an upcoming exam, purely by researching past exams in the same course, studying the syllabus, etc., figuring that he will be only about half right on average, and everyone will see that he is just an ordinary guy and leave him alone. Except that the exam he so produces turns out to be identical to the real one. Oops. (Later, in the present day, he tells a client, who is wanted for murder: "Remember that you are talking to someone who has spent time in prison for something he didn't do.") Dirk's detective methods rely on studying "the vectors of interconnectedness of all things", which, plus the fact that he is perpetually broke, makes him look to casual observers rather more than less like a cheap con artist. "Meet me at the pizza parlor in half an hour. And bring money." "What -- Dirk, are you trying to blackmail me?" "No, you fool, for the pizzas!" I am reminded of a character named Gallagher who appeared in several short stories by the science fiction author Lewis Padgett. Gallagher is a brilliant inventor, but can only do inspired work when blind drunk. He wakes up to find that he has created astonishing gadgets, but has no idea how they work or even what they do. This is a similar to Dirk Gently, who also has a gift bordering on the supernatural, but is more its victim than anything else because his talent is not at ALL within his control. One theme not mentioned so much in other reviews is computers and related humor. One of the main characters, Richard MacDuff, is a Macintosh programmer. (Douglas Adams himself was a fanatical Mac user in real life.) Among Richard's "creations" are a program that turns numerical, i.e. company financial, data in

One of my ALL TIME FAVORITE BOOKS! BRILLIANT

Published by Thriftbooks.com User , 17 years ago
As much as I loved the Hitchhiker series, I actually enjoyed this book this even more. I originally listened to it on tape, and for a while, I was so confused with the plot, I almost turned it off and went on to something else. But, something (probably Adams's brilliant writing) kept me listening, and I stuck it out. As I kept going, more and more things came together, and I became curious...then involved...then engrossed. By the end of the tape, everything was so clear that I had to start all over and listen again to admire the unexpected way the story was woven together. (I understand Richard Dawkins had the same response to this book, and after reading it again the second time, wrote Douglas Adams the first fan letter Dawkins had ever written to anyone.) It involves: Samuel Taylor Coleridge, the Rhyme of the Ancient Mariner, ghosts, electric monks, time travel, cell phones and message machines, a pair of women named Susan, Cambridge University, romance, ancient aliens, Schroedinger's cat and a semi-legitimate (but highly imaginative!) detective named Dirk Gently, oh, and...by the way, the end of the world. If you don't see the connection between all these diverse subjects, it's because you don't understand the fundamental interconnectedness of all things, and therefore you really owe it to yourself to give this book a try! The only downside at all is that Douglas Adams is not around to give us more of this (and all his other) amazing literary character. I love Doug Adams, and his absence is very, very much felt.

A book on the fundamental interconnectedness of all things

Published by Thriftbooks.com User , 18 years ago
Having finished with the Hitchhiker's series with So Long And Thanks For The Fish, Douglas Adams created a diptych utilizing the character of Dirk Gently, an eccentric character who in this first novel creates the self-titled Holistic Detective Agency. His method does not involve using fingerprint powder, but rather seeing the fundamental interconnectedness of things. As he elaborates to a client, "I see the solution to each problem as being detectable in the pattern and web of the whole. The connections between causes and effects are often much more subtle and complex than we with our rough and ready understanding of the physical world might naturally suppose." Missing cats is a specialty, using Schrodinger's quantum mechanics equation. It also serves to exploit old woman seeking their missing cats of their money, that is if he ever gets paid.Gently cross paths with his old classmate from St. Cedd's College, Cambridge, Richard MacDuff, who is having a trying and interesting time. MacDuff, a computer programmer working for Way Forward Technologies, becomes involved with his old college tutor, Professor Urban Chronotis, the aged Regius Professor of Chronology, and hence bearing the nickname "Reg" whose vice is conjuring tricks, and in the middle of a dinner honouring Samuel Taylor Coleridge, performs a totally inexplicable one involving a salt shaker and a Grecian pot that perplexes MacDuff. Equally perplexing is how a horse entered the bathroom of his professor.MacDuff has many other things to worry about. He's overdue on a software programme for his boss Gordon Way, he isn't spending enough time with his girlfriend Susan, who's his boss's sister, and he's got a sofa lodged halfway up the stairs to his flat. To make matters worse, he then sees the ghost of his boss, who was mysteriously killed at the same time he was at the Coleridge dinner, and is wanted by the police for questioning.Adams' usual humorous observations on human foibles are at play here. He describes Reg's memory as being comparable to a Queen Alexandra Birdwing Butterfly, "in that it was colorful, flitted prettily hither and thither, and was now, alas, almost completely extinct." Reg and the eccentric Dirk, who seems able to explain things MacDuff can't, are the best characters here.As for MacDuff, there is some of Adams in this character. Like MacDuff, Adams attended Cambridge and went for an English Literature degree, only it was at St. John's College and not St. Cedd's per the novel. Adams also managed to turn in only three essays (!!), which was three more than MacDuff completed.Some may know that Adams was the script-editor for Dr. Who from 1978-1979. Elements from two stories he personally wrote, City Of Death and Shada pop up here. In the latter story, there is a character called Professor Chronotis as there is here.The humour is more tempered than in Hitchhiker, and relies more on wit and funny situations rather than the laugh-out-loud comedy of the HH seri

Whatever you do, don't read this book!

Published by Thriftbooks.com User , 19 years ago
... unless, of course, you're the kind of person who does precisely the opposite of whatever they are told to... oh! Hang on... that's all of us! Folks, not only is this book brimfull of the usual brilliantly quirky insights and satires of the inimitable mr Adams, but it is also an extremely well thought out, self-consistent detective story, with only a few completely fantastic creatures. (Don't be scared now!) And perhaps the odd (almost) impossible occurence. (Surprised?) The characters are an utter delight, and arguably more sympathetic than the cartoon figures from the hitchikers series. Guaranteed: you'll laugh out loud in places, and at least spend a good deal of the rest of the time with a most idiotically pleasant smile on your face. (Try not to drool in public.) Upon finishing, you will find yourself obsessively compelled to schedule an immediate re-reading, seeing as you will most certainly have missed a number of small delights and teasingly hidden clues. This story Rocks! And Haunts! Unmissable! I also FORBID you to read Dirk Gently's further adventures in "The long dark teatime of the soul"!

Hands down, the best book Ive ever read

Published by Thriftbooks.com User , 20 years ago
I have read this book so many times I've lost count. Lets see now: The character portrayal is brilliant, Adams' humour is the kind that makes you laugh out aloud - in fact the humour achieved in this novel is unparalleled, the plot is delightfully complex and fascinating, the story is well-paced and makes you want to read read read, Dirk is utterly hilarious, and Adams' style of writing and mastery of wordplay has never been more evident.Sometimes I'll read a passage over and over, not because I dont understand it but because it's so well written that I just about cant believe it. This book truly is a mental stimulation that you wont forget in a hurry, an absolute treat, and if I ever had to choose one book to be stranded on an island with, this would be it. Of course I would stash a few nudie books down the back of my pants as well, the authorities wouldn't notice.5 STARS IS NOT ENOUGH for this book!!!!
Trustpilot
Copyright © 2022 Thriftbooks.com Terms of Use | Privacy Policy | Do Not Sell or Share My Personal Information | Accessibility Statement
ThriftBooks® and the ThriftBooks® logo are registered trademarks of Thrift Books Global, LLC