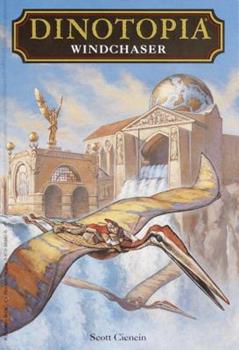 (Book #1 in the Dinotopia Series)

A storm at sea washes a young pickpocket, Hugh, and a surgeon's son, Raymond, overboard.??Landing on the strange island world of Dinotopia, Raymond and Hugh learn the meaning of real courage and true friendship, with the help of a reclusive Skybax named Windchaser.??

a wonderful book about freindship.

Published by Thriftbooks.com User , 15 years ago
when I began reading this book I thought it was great. Even before I was in 3 pages of the book i loved it. the story is about two boys who are on a ship with prisoners on it. then the prisonrs try to take over the ship.raymond, one of the boys,is sent over board and is saved by one of the prisoners. and they get taken to a tropical island on dolphins. Raymond and Hugh meet a dinosaur and are taken to a city called waterfall city. there they were taught all about dinotopia. it is Ryamonds birhtday and the dinosaur they meet sends them to a place were they were to learn how to ride a skybax. Raymond was very intreseted because when they were in waterfall city a skybax named winchaser attacked people. when they were there Raymond ran away.he meets windchaser and they talk to each other. skybaxes cant talk so this a a huge suprise. raymond and hugh go on a quest to find windchaser. when they go raymond gets injured and windchaser saves him with hugh. at the end hugh has learned that at heart he is not a crimanal.

Published by Thriftbooks.com User , 19 years ago
I read this book at school and love it. It explains Dinotopia so you don't have to have read "Dinotopia a Land Apart From Time" to understand the story. If you want to read the children's series I recomend that you read this book first. I particualy like how it is about Skybaxes ( a tipe of flying dinosaur that can be rode on by humans). I have read two other books in the series and this is by far the best one. This is a must have for both people who have read other Dinotopia books or have never read a Dinotopia book.

Published by Thriftbooks.com User , 20 years ago
I'm not even into dinos, but I loved this book. It has a great plot that will keep you on the edge of your seat with the book glued in your hands. Raymond and Hugh land on Dinotopia, meet some neat characters, and then proceed to learn many valuable lessons. Hugh needs to learn to fit in, and Raymond wants desperately to help an injured dino named Windchaser. How will they accomplish these feats? Read the first Dinotopia book to find out!

An excellent addition to the Dinotopia line!

Published by Thriftbooks.com User , 20 years ago
Like all good spinoffs, this book adds yet another layer to the Dinotopia story. I found "Windchaser" somewhat more mature in tone than several of the other series books, in that it touches on the serious subjects of death and bereavement, unfortunately found in Dinotopia as elsewhere. This added dimension made for a much richer and emotionally involving story than those books with simpler "teen has a problem and eventually solves it" plots. Of all the Dinotopia series writers I've read to date, Scott Ciencin exhibits the best combination of character and story development with uniquely creative situations. Any Dinotopia fan will of course enjoy this book, and I'd also recommend it as a 'plain good read' to anyone not yet familiar with this fascinating series.

Published by Thriftbooks.com User , 20 years ago
Raymond and Hugh were both stranded on Dinotopia but Hugh did not feel at home so when he saved Raymond he began to feel at home. I agree with th part when Hugh rode Windchaser to save Raymond because the story would have had a sad ending. I would recommend it to anybody who loves Dinosaurs because it is full of dinosaurs.and Adventure lovers because it ha alot of adventure
Copyright © 2020 Thriftbooks.com Terms of Use | Privacy Policy | Do Not Sell My Personal Information | Accessibility Statement
ThriftBooks® and the ThriftBooks® logo are registered trademarks of Thrift Books Global, LLC