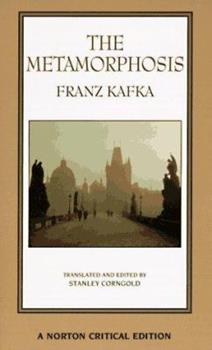 The novella is fully annotated and is accompanied by selected textual variants. Backgrounds and Contexts introduces readers to The Metamorphosis in the richest possible setting. The links between the author's life and his work are explored through an examination of his personal writings. Kafka's letters and diary entries illuminate the creative process behind his portrait of Gregor Samsa, his family, and their nightmarish ordeal. Criticism collects...

Published by Liz , 6 months ago
The book is very short and straight to the point. Expands on how working everyday doesn't truly make you happy and how all the wealth you've accumulated can be easily taken. Shows how fiance very much impacts people. Good book, really short and easy to read.

Man Turns Into Bug: The Perfect Interpretation of Human Nature

Published by Thriftbooks.com User , 13 years ago
Literature throughout history has tried to exemplify the personal identity of human beings, but none has done it so creatively and as hilariously as Franz Kafka's masterful novella, "The Metamorphosis". Kafka has created the most absurd situation; a traveling salesman wakes up one morning to find that he has turned into a giant dung beetle. Yet Kafka uses the absurdity of this premise to exemplify how the unfortunate Gregor Samsa (the man-bug) frees himself from a life of servitude and monotony, to assert his own personal identity through his metamorphosis. Franz Kafka uses brilliant symbolism, hilarious tone, and unique characterizations to exemplify the plight and transformation of this unfortunate salesman and it is through these tools that Kafka creates an absurd experience that any reader can relate to. The use of symbolism throughout this story is what truly allows the reader to understand and appreciate Gregor's push towards independence. Gregor was transformed into a bug, but Kafka uses this transformation as a symbol for Gregor's metamorphosis towards humanity. Before Gregor's transformation, he only lived life to serve others, but through his metamorphosis Gregor slowly comes to meet his own desires, seeking a more personal independence and even coming to appreciate music and art. But most importantly, it is through Gregor's final understanding of love that Kafka truly exemplifies how human the insect truly is. Kafka uses the symbolism of Gregor becoming a bug to represent the tragedy of the life that Gregor was leading, and his metamorphosis symbolizes a more gradual metamorphosis towards an individual humanity. By physically disassociating Gregor from humanity, Kafka perfectly exemplifies how human Gregor has really become. Kafka's use of symbolism is what truly makes the reader's experience relatable to the tale. Although nobody could ever experience what it feels like to wake up as a giant insect, Gregor's struggle for an identity is a trial that is real and relatable to all of us. Kafka represents independence as what truly makes Gregor human, and this same truth exists within all of us. It is through the symbolism of the metamorphosis that Kafka relates this to us, the readers, and he does this brilliantly. The tragedy and emotional connection that Kafka elicits to the reader is of true merit, but the book's success lies in its ability to tie this tragic tale with such a humorous tone. "The Metamorphosis" is an obvious tragedy and it expresses a very serious message. Kafka leaves us no choice but to pity Gregor for the eventual state of his life, but despite all of this, Kafka has written one twisted and hilarious story. The dark, humorous tone that Kafka injects into his words is apparent from the very first sentence, as the story begins with an immediate shock: "One morning, as Gregor Samsa was waking up from anxious dreams, he discovered that in bed he had been changed into a monstrous, verminous bug

Kafka's writing works at many levels

Published by Thriftbooks.com User , 14 years ago
Kafka's writing works at many levels. I am sure almost every school of Literary Criticism makes its own special narrative of Gregor Samsa's transformation into an insect, and the subsequent trials and tribulations he knows. On one level Samsa is Kafka and he is telling us the story of his own self- contempt, the world of his own family relations, the world in which a powerful dominating father reduces his son to nothing more than an object of disturbance and villification. On another level Samsa is clearly the artist seeking his own form of transformation and expression. He is the outcast in a Society which refuses to recognize him for what he is. On a third level we are seeing a historical prophecy for what is to happen to Kafka's world and family - that they are to be destroyed mercilessly by those ' superior beings' who morally are most evil. One of the startling elements in the story is seeing how once its premise is given, and Samsa is an insect, how he operates on that basis. The tremedous seriousness with which he takes himself indicates perhaps Kafka's questioning of the possibility of truly making ' redeemed lives' lives of blessedness given the circumstances of the social and political milieu given here. Kafka imagines himself, imagines his own being crushed, and yet continues beyond this story to others. There is a sense as I write this that I have not gotten it right. I have the feeling that I missed the story in a certain way. Perhaps this too is part of the experience the reading of Kafka gives. The world does not only fail to meet our specifications for it, even those parts of it we choose to focus on have their own strange pathways to different kinds of meaning. These multiple readings taken together perhaps provide some ense of who Kafka is , and what his work means. But do they really?

I teach from this edition

Published by Thriftbooks.com User , 15 years ago
I first read this edition in a summer workshop for AP teachers at Carnegie Mellon in 1987. It worked for me then, and works for me now. I have used it the last 2 years in a public school International Baccalaureate course. Corngold's introduction, extensive endnotes, letters by Kafka and others, and selections from criticism are a great resource in helping students understand not only the various meanings one can derive from the novel itself, but also in helping them having in one place different ways of approaching a novel; that is, from various critical angles (biographical, psychlogical, historical, etc.), from viewing primary documents and, of course, head on. What a world Kafka creates. Who cares what it means, in the end. But this edition is helpful in giving kids their first solid clobber of explication. I also use Peter Kuper's comic novel (search for it here) to add one more perspective, though I have to say, Kuper's interpretation is easily my least favorite. A bit over the top on the grostesqueries, and not enough of Kafka's unspoken but powerful energy. I'm sure there are other critical editions which are fine too. Try them as well.

Published by Thriftbooks.com User , 21 years ago
Kafka knew so well how to make us feel trapped, estranged and lonely like the characters in his stories. He struggled with anxiety and feelings of inferiority in his own life, and his writing expresses the passive realization that life is a dark and confusing nightmare where we in no way are masters of our destinies. A young travelling salesman, Gregor Samsa, wakes up one morning and realizes that he has been transformed into a giant bug. Having been the provider for his elderly parents and his adolescent sister, he is now forced to crawl around in his room all day, hiding his hideous self from the sister who brings him food, unable to communicate and barred from the world outside. It is a story about being dehumanized and alienated, of being useless and unwanted, of becoming a burden to oneself as well as to others. Kafka is such a phenomenal writer that the mere absurdity of the plot is completely overshadowed by the vivid and somehow realistic descriptions of the emotional and behavioral responses of Gregor and his family to the unreal situation. It is as if Kafka is telling us that this circumstance is no more strange or hopeless than the predicaments faced by the average family.
Copyright © 2020 Thriftbooks.com Terms of Use | Privacy Policy | Do Not Sell My Personal Information | Accessibility Statement
ThriftBooks® and the ThriftBooks® logo are registered trademarks of Thrift Books Global, LLC