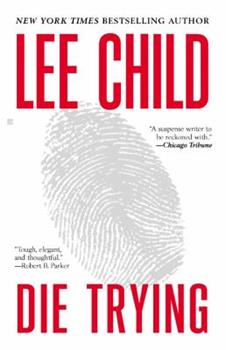 When a mysterious woman is kidnapped by a politically motivated fringe group and taken to their compound, Jack Reacher must help her escape with her life--from the inside out...

Published by Thriftbooks.com User , 13 years ago
Lee Child is a great author. If you haven't read him you've got to. I bought this for my son in law and he's now had to read every one of his books. As did I!

Jack Reacher takes on a militant militia group in Montana

Published by Thriftbooks.com User , 14 years ago
Lee Child took the world of literary thrillers by surprise--and by storm--with his excellent debut novel, Killing Floor. Child's first book introduced readers to Jack Reacher, ex-military cop turned rugged-individualist vigilante. Written in first person and featuring nonstop action, Killing Floor delighted readers and created new Lee Child fans in the U.S. and around the world. In a market that more often than not sees second books that fail to live up to the standard set by the author's first work, Die Trying is a surprising deviation from the norm. Even better, Child's second book is not in any way a carbon copy of his first. For one thing, the author proves himself quite capable of writing from multiple points of view, switching to the more familiar (and simpler) third person narrative. But beyond the writing style, the story is quite different from the first book as well. Die Trying opens with Jack Reacher and a woman he doesn't know being hustled off the street and into a cargo truck by an unknown assailant. As Reacher and the woman, who turns out to be a fairly high-profile FBI agent named Holly Johnson, brainstorm theories about the motivation behind their kidnapping and strategize about how they might escape, they gradually learn more about each other and about the bizarre and frightening situation in which they find themselves. As the story unfolds, Reacher proves to be every bit the chivalrous and ingenious nonconformist he was in Killing Floor, refusing escape on numerous occasions in order to provide whatever assistance he can to Holly. Die Trying has both a more convincing central premise and a more compelling eventual setting than Child's first book as well, as Reacher and Holly end up deep in the Montana wilderness, held captive by a renegade militiaman intent on using them as the impetus for his war with the federal government. Child builds the suspense throughout, climaxing in a literally explosive finale that leaves the reader cheering exhaustedly while finally climbing into bed (or eating a late dinner, or returning to work, or doing whatever was neglected during however long it took to finish reading the book). Child has stated publicly that he intentionally writes "clean" thrillers--books that contain no graphic sexuality and little language. This is true for the most part, though it should be pointed out that Child's idea of "clean" will undoubtedly differ from the definition of that concept held by some of his potential readers (Child began his career as a television writer, and in typical Hollywood fashion, Reacher and Holly do have a sexual encounter, though the scene is not graphic). Sensitive or younger readers should also be aware that frequent and often brutal violence is a trademark of Jack Reacher as well. Die Trying is a fun book to read--engrossing, entertaining, and hard to put down. Readers who enjoy fast-paced action novels with a moral rooted in traditional (and even, to a certain extent, biblical) liter

Jack Reacher the Hero of the 21st Century.

Published by Thriftbooks.com User , 23 years ago
Die Trying is the sensational sequel to Killing Floor by Lee Child. If you haven't read Killing Floor I would recommend doing so before you read this book as it provides a basis for Reacher's character realism. As before the main character is Jack Reacher, ex military policeman and all round superhero. Reacher is intelligent, deductive and physically prodigous, so if you like heroes of the elite variety then this is the character for you. If you prefer cardiganed librarians and lack the ability to suspend disbelief (an essential criteria for FICTION readers) avoid this book as the storyline is astounding with a capital ASTOUND. Lee Child has produced a book that captivates and ensnares its readers with suspense, intrigue and a plot with more twists than a bowl of particularly tangled spaghetti. A man mountain of a psychopath, a beautiful FBI agent with more secrets than the FBI itself, moles galore and the president of the United States, all come together in the valleys of Montana, in a literary feast. If that isn't enough there's even a spot of romance (but not too much). All in all a book for those of us who believe in a world where heroes do exist.
Trustpilot
Copyright © 2022 Thriftbooks.com Terms of Use | Privacy Policy | Do Not Sell or Share My Personal Information | Accessibility Statement
ThriftBooks® and the ThriftBooks® logo are registered trademarks of Thrift Books Global, LLC