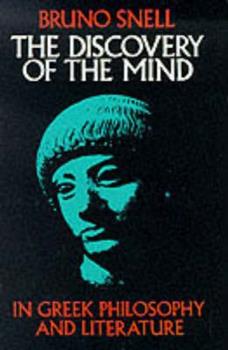 The Discovery of the Mind

"An illuminating and convincing account of the enormous change in the whole conception of morals and human personality which took place during the centuries covered by Homer, the early lyric poets, the dramatists, and Socrates." -- The Times (London) Literary Supplement. European thinking began with the Greeks. Science, literature, ethics, philosophy -- all had their roots in the extraordinary civilization that graced the shores of the Mediterranean...

Dated but good general reading on the influence of Greek thought

Published by Thriftbooks.com User , 22 years ago
To paraphrase an observation Whitehead made over and over, something wonderful happened between the 8th and 5th century BCE in Greece. Why the circumstances came together in such a way as to produce what we glibly know as "classical Greece" no one may adequately explain, but Snell's book makes the quest for understanding pleasant reading and interesting (if dated, in places) intellectual fare. This side of modernity, it is easy to pan this book (written in the war years early in the 20th century) as antiquated modern humanism, and indeed it does tend to go on and on about the "individual" (often in isolation from the community) and the genius of the Greek mind, perhaps ignoring that there were other cultures before and after 5th century Greece. But precisely these throwbacks are the book's greatest strengths, when the context of its writng is taken into consideration. In pre- and wartime-Germany, an unfortunate interpretation of Hegel's dialectical phenomenology allowed an entire intellectual culture a collective amnesia about the worth and power of the individual, in favor of the State as fulfillment of the "outworking of Spirit." For Hegel, this State was Prussia; post-Weimar Germany, however, interpreted it differently. But Snell does not use his book as an anachronistic justification for German superiority as heir to the best of classical Europe, as so many authors of his time certainly did. Rather, he points out that the "discovery" of the individual mind, acting in concert with others and pointed towards "the good" as benevolently seen by Socrates, was the greatest achievement of classical Greece bequeathed not only to Europe but to all the world. That Snell could bring out this aspect of Greek thought, and emphasize it, speaks well of him and the book. The small volume is great reading for "cultural literacy," since to breathe in the West (now, almost everywhere, culturally) is to breathe air exhaled by Greek writers long ago. There are serious problems with this, no doubt. But coming to terms with Western canon means coming to terms with Greek literature and philosophy. This book helps one do just that.

A brilliant but quaint series of essays on Greek literature.

Published by Thriftbooks.com User , 23 years ago
The postmodern reader will judge whether this collection of essays, originally published between 1929 and 1947 in German Classics journals, adequately addresses the horrors of the time during which it was written. The conclusion of one of the later essays: '...there is one respect in which we too must abide by the principle of humanitas...That is the esteem in which we must hold the dignity of man: a modicum of humanitas for which no particular talent is needed. The eternal absolutes which rule over us, especially justice and truth, unhappily often make us forget that the absolute which accedes to our understanding is not entirely absolute after all...[W]hen it is agreed that certain institutions have come to represent the absolute, the catastrophe becomes inevitable. Then is the time to remind oneself that each and every human being has his own share of dignity and of freedom...'
Trustpilot
Copyright © 2022 Thriftbooks.com Terms of Use | Privacy Policy | Do Not Sell My Personal Information | Accessibility Statement
ThriftBooks® and the ThriftBooks® logo are registered trademarks of Thrift Books Global, LLC