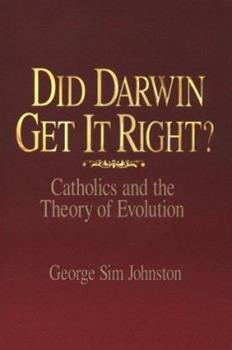 Did Darwin Get It Right?: Catholics and the Theory of Evolution

George Sim Johnston Sort out the facts about evolution by discovering that Catholic belief about God's creation and scientific evidence about the origins of the universe are mutually compatible. This description may be from another edition of this product.

Published by Thriftbooks.com User , 16 years ago
First, I must unexpectedly respond to the "Creationism for Catholics?" review (if you can call it that) of July 27, 2005. Having read and appreciated the excellent quality of Mr. George Sim Johnston's little book, I can attest that either J. Keith "Agastache" has never read DID DARWIN GET IT RIGHT?, or else he is a militant atheist with an uncontrollable name-calling reflex which brands anyone not sharing his pseudoscientific beliefs as a "hard-lined [sic] fundamentalist" promoting "creationism." That mudslinging is an unfortunate slander of Mr. George Sim Johnston (not "Johnson," as repeatedly stated by that reviewer) and a gross misrepresentation of DID DARWIN GET IT RIGHT? (An antidote for such poisonous tirades from "I'm a scientist, so my athiesm must be true" types might be Alister McGrath's DAWKINS' GOD. McGrath earned his Ph.D. in biophysics at Oxford.) And what was with that "Darwin was brilliant and Mr. Johnson [sic] is not." barb? Anyone who reads Johnston's book will surmise that Mr. Johnston is a very modest gentleman with no pretensions of brilliance (though I did some research and discovered that he graduated from Harvard), who would heartily agree that Darwin was a very bright fellow indeed. There is also a bizarre comment in a more recent review, stating that "like so much of the Neo-Catholic stuff that gets published these days, there's nothing really profound nor hard hitting." There is absolutely nothing "Neo-Catholic" in this fine little tome, so whether this slur is supposed to be insulting, dismissive, directed at the author, or directed at the publisher (I have no idea...), it simply doesn't apply to the book in question. As to there being nothing profound or hard-hitting, that might refer to the absence of the proper polemical tone expected by that reviewer. In fact, DID DARWIN GET IT RIGHT? is not at all a polemical work. It does not hurl insults at anyone, nor does it hold to the biblical or pseudoscientific absolutism of so many tracts. Rather, it seeks to combine both the reason one might expect from the Roman Catholic scholastic tradition with a proper skepticism of scientism (as opposed to science). I came here, however, primarily to post a positive recommendation of "DID DARWIN GET IT RIGHT? -- Catholics and the Theory of Evolution" for its carefully constructed analysis and levelheaded discussion of the various issues and angles involved in the debate. I found the book's major weakness to be its now-dated (1998) summary of the status of theoretical and empirical inadequacies in the neo-Darwinian synthesis. While some of the weaknesses and outright dishonesty attached to the teaching and promotion of that synthesis still stand, there have since been published some exciting efforts attempting to resolve the weaknesses of neo-Darwinism. Examples include James W. Valentine's (UCLA Berkeley) mammoth and breathtaking ON THE ORIGIN OF THE PHYLA (2004) and Sean Carroll's (Wisconsin/Madison) ENDLESS FORMS

Not just for Catholics

Published by Thriftbooks.com User , 22 years ago
The answer to the title question is "with modifications, maybe". The author, citing many writers, presents the arguments from both sides. Science shows that natural selection causes varieties but it has never discovered changes in species. Because useless appendages disappear as the species adapts, gradual transitions to forms differing by more than just a variation are contrary to reason. The currently popular modification of Darwin's theory is called punctuated evolution in which species change over short periods of time, then remain unchanged for long periods of time. The periods of change are supposedly so short that specimens are not caught in the fossil record. To date, the changes have not been duplicated in the laboratory, despite the many years of bombarding fruit flies with radiation. This theory, that something has occurred for which there is no evidence, is based on the fact that there are many species. It is unscientifically based on the having the ends justify the hypothesized means. Because the theory includes the hypothesis that there is no evidence, it is safe from disproof. Thus we are left with "maybe." Thus also does the hypothesis fail to meet Popper's falsification criterion to qualify as science. It is no more scientific than a statement that every species we observe appeared instantaneously. But we do know that our schoolchildren are being misled by the dioramas that appear in the museums of natural history, which show monkeys in transition to man and dogs in transition to horses. These transitions have been proven untrue. No wonder children are poor in science when we teach them such poor science.Because the Bible is not a science book, we cannot appeal to the Bible to determine scientifically how the first instance of man appeared. Evolution, like all of objective science, is not contrary to religion. God can create gradually or instantaneously, by any sequence He chooses. Most Christians are taught how to interpret the Bible; only those limited to a literal interpretation find a conflict between science and the Bible. Genesis was written for the people of its time. It identifies the order of their universe, as designed by God. That this very order underpins all science is ironic.Why, then, is evolution held by so many? Many scientists, perhaps in attempting to keep theology and science separate, start by hypothesizing that there is no God. Evolution is their only alternative. Their theory is, at its very foundation, a mixture of theology and science - just what they are trying to avoid. The rest of us are taught this theory as if it were scientific fact. Never once do we face the question, "Why is there something rather than nothing?" Never once do we ask, "What existed before the big bang?" Never once do we test the theory in light of the science of thermodynamics, which implies that nature is devolving rather than evolving?This book should make us less

Excellent summary of the problems with evolutionary theory

Published by Thriftbooks.com User , 22 years ago
I found out about Johnston from one of his pieces in the Wall St. Journal. I was looking for a good, readable critique of current evolutionary theory. Despite the Catholic subtitle, I found this little gem to be almost entirely free of any religious dogma. It was exactly what I was looking for. Johnston is obviously very smart, well-read, and writes marvelously. He first defines and then lays bare the weak scientific evidence for natural selection. All of our modern conception of human beings is based on Darwin's flawed premise. This book demonstates that you can question evolutionary theory without being a Bible-thumping fundamentalist.

Published by Thriftbooks.com User , 22 years ago
This book is a marvelous consideration of Darwin's theory of evolution by natural selection. It's bristling with insights, and the suggested reading list, which includes biologists such as Gould and Mayr and Christian writers like Maritain, Chesterton, and C. S. Lewis, is a great starting point for further research, both scientific and philosophical.

Darwin May Not Have Gotten It Right - - But Johnston Does!!

Published by Thriftbooks.com User , 23 years ago
A brilliant, insightful, concise, beautifully written (and blessedly footnote-less) summary of Darwin's theory, the scientific evidence, and the Church's actual (albeit frequently misrepresented and widely misunderstood) position. Johnston argues convincingly that there is and can be no conflict between religious faith and true science - - and hence between the Biblical Creation story as read through the Church's eyes and such scientific evidence as exists (and may yet be found) on the "origin of species." Johnston supports his thesis with an impressive marshalling of the facts, the product of prodigious research, and with razor sharp analysis -- all presented in crisp and lively prose, with a balanced exposition of the principal arguments on all sides. The result is a taut, fascinating, closely-reasoned, non-demagogic, reader-friendly volume of less than 200 pages, fit for scholars and laypersons alike. "Did Darwin Get It Right" aims at the truth, punctures the myths, and scores a bullseye. It makes a singular contribution by demonstrating in itself that those who seek scientific truth need not surrender their faith while those who understand the Church's actual position (as articulated in our time by John Paul II, and in far earlier times by such giants as Augustine and Aquinas) need never flee from the fruits of scientific research in order to live their faith. Indeed, says Sim Johnston, just the opposite.
Trustpilot
Copyright © 2022 Thriftbooks.com Terms of Use | Privacy Policy | Do Not Sell My Personal Information | Accessibility Statement
ThriftBooks® and the ThriftBooks® logo are registered trademarks of Thrift Books Global, LLC